I know, I know. It’s taken me over a week to finish a novel. It’s not my usual speed. I have no excuses for it. But I have finished this giant book, even if it did take me awhile. I decided to review each volume separately as its own post, and I’m going to finish that off right now. Right from the outset readers should know that I am not going to spoil this magnificent mystery. It would ruin the experience. 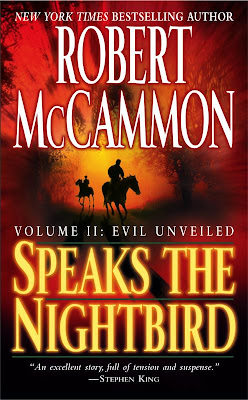 When we last left our hero, Matthew Corbett was chasing some dude into the wilderness just a day before the so-called witch’s judgement is to be revealed. Matthew is certain that Rachel, the witch, is innocent, and he has numerous pieces of the puzzle, but he’s not quite close enough to put it all together. When Rachel is eventually sentenced to death, Matthew finds he has just days to prove her innocence before they burn her at the stake.

Honestly, a lot of the same things I said about the first volume apply here. A lot, but not everything. McCammon’s style is still imminently readable and generally enjoyable. He’s very clever with turns of phrase and has a distinct ability for description.

In the first volume, I complained that McCammon jumped around too much with characters’ perspectives. He wasn’t grounded enough in Matthew and let his narrative dip into everybody else. That’s been curbed a little bit, once the stage has been set (ornately) and the players in place. He lets Matthew become the focus, rightly so, and stays with him, with a jump here and there. It’s a great improvement from before.

The focus of the plot becomes even tighter with the second half, which should be expected. Really, if Speaks the Nightbird hadn’t reined in its unwieldy cast and plot by the second half, I’d be worried. The mystery of the novel is so labyrinthine that I wasn’t sure if McCammon even had plans for unravelling it for the denouement. I shouldn’t have fretted though; McCammon indulges in a “gather everybody and laboriously explain the solution to the group” scene. It’s not the most exciting scene, but it does lay out the sheer amount of detail put into the mystery.

And yes, McCammon does play fair. Mostly. A careful reader could put together the clues and solve the mystery himself, save for a couple details that are misdirection on the part of the culprit and the author, which is why it’s mostly playing fair and not totally.

The major issue that readers might have with Speaks the Nightbird is its interminable length. There’s a famous author who once said that critics tend to over-praise long novels if only because of the relief of finishing such a task. Speaks the Nightbird is a long novel. Almost 900 pages in paperback. For the most part, McCammon keeps the pace up, the historical detail flying, and the plot engaging. Could it use a trim? Sure, why not. I’m guessing the first draft was somewhere in the 1500 pages realm.

One of the things that they teach you in creative writing is to grind your story down and remove any fat. Keep it lean and mean. Often, an unwanted effect of this is that the story becomes lifeless, without a heart. Something that struck me about Speaks the Nightbird is that at no point in the entire novel does it feel lifeless. In fact, mostly the opposite. This book has that X factor that people are always talking about. It’s not just a matter of the technical detail, or the complexity of the plot, or the historical background. It’s a mix of it all. McCammon found himself a fantastic protagonist in Matthew Corbett, a flawed original mixture of a man, and it’s no wonder that McCammon wrote two more books starring him.

Speaks the Nightbird always feels like it’s too big for the pages, like it wants to leap up and keep going, and only McCammon’s experience as a novelist holds the entire thing in check. That’s part of what makes the experience so enjoyable. The other part is that the reader trusts in McCammon. This is clearly not the work of a first-time author. It’s comforting knowing that McCammon knows where everything is going and knows how to properly get the reader there.

It’s a shame to do this, but McCammon’s skill as a storyteller reminds me a lot of Stephen King. While the subject matter is not shared between them, their love of a damn good story and telling it is. King’s novels and stories wouldn’t have been nearly as popular if it wasn’t for the fact that King is just so expert as spinning tales. The same can be said here. If McCammon wasn’t such a good storyteller, right down to the basics, then this Hydra-esque narrative would have been an absolute chore to slog through.

I’ve written a lot about the purpose of art and its didactic nature. I’ve also gone on record many times that escapist art is never to be shunned. It’s a contradiction and I’m more than willing to recognize that. Speaks the Nightbird is escapist literature and proudly so. Nothing wrong with that. One can’t blame anybody for wanting to escape, especially to such an enticing place and time. But McCammon doesn’t shy away from the real history of the locale. The medicine is awful, the people racist, black people enslaved, and the life dangerous. It’s nice to see historical fiction that is neither nostalgic and forgetful, nor revisionist or obsessed with exposing the hatred and corruption of the people. It’s a balancing act that’s hard to do, and McCammon, for the most part, succeeds.

Ultimately, I really liked Speaks the Nightbird. It’s witches and Indians and shootouts and swordfights and pirate’s treasure and everything else you could ask for in historical fiction. It’s a rollicking adventure that threatens to dash off and do its own thing but McCammon keeps it in line. It kept me entertained all the time, and I learned a few new things about 17th century medicine and culture. I will definitely be reading the next Matthew Corbett adventure!
Posted by matthew.