I am a huge fan of the Coen brothers. Well, of their work, I guess. I've never met the two guys. I'm sure they're nice people. They're from Minnesota, after all. Anyways, I always try and go see their movies in the theatre, if only to support the team, if you know what I mean. My Dad was nice enough to take me out to see the True Grit remake (thanks, Dad!). 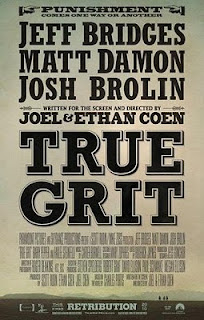 Mattie Ross's father is shot and killed in a town where no one knows him, and Mattie thinks the law isn't giving enough of a shit to do something about it. So she hires Rooster Cogburn, allegedly the meanest Marshall in town, and they pursue the man who shot her father. They are followed by LeBoeuf, a boasting Texas Ranger, who has been chasing the same man for months.

True Grit, or at least, the remake, is a pretty pure and simple genre movie. It's a Western with good guys and bad guys, some violence, and a heart. This isn't the first time that the Coens have done something so purely genre - Miller's Crossing would probably fit that bill. Of course, the Coens wouldn't just make something genre and leave it at that.

Apparently, and I haven't read the book, but the novel is closer in tone to the remake than the original, redolent with eccentric characters, bizarre diction and outrageous dialogue - all elements shared by Coen brothers movies.

The dialogue is easily the highlight of the movie. Some of the funniest lines I've heard all year are in True Grit, and they're shared by Hailee Steinfeld, as Mattie, and Jeff Bridges as Rooster. Bridges' performance is one to savour. It's hilarious, and Bridges just throws himself into the role.

It's a pretty damn good movie, and I loved it, but - and there's always a but - it could've been a little meaner. This was one of the rare times in a Coens movie where the good guys make it and the bad guys don't. Sometimes the horrible outcomes of their movies are what make the movies so different and what lets them get under your skin. True Grit is different, but it's not cut throat.

This is a trifling complaint, and shouldn't deter anyone from seeing it though. True Grit is a fantastic movie with absolutely stellar performances, and some amazing photography from longtime collaborator Roger Deakins. I loved the movie, and so should you. Just go in reminding yourself it's a comedy, and you'll love it.
Posted by matthew.