The Broom of the System

This whole reading classics and books considered the best and authors considered the best has reaped some amazing rewards. Delillo, Atwood, Paul Scott, Byatt, etc, etc have all been amazing experiences that I would have never had if I didn't try reading the craziest shit. And on top that crazy heap, the craziest of all, is David Foster Wallace. I can't fucking believe I haven't read this guy before. What stopped me? 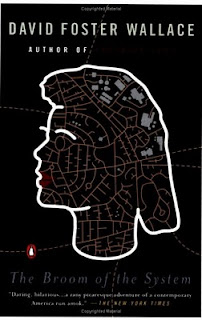 The Broom of the System is Wallace's first novel, published in 1987. It's the zany misadventure of Lenor Beadsman in an alternate Cleveland, Ohio. She works the switchboard for a publishing firm that publishes nothing, she's dating the vertically-challenged and insanely jealous boss, her great-grandmother and twenty other patients have escaped from a nursing home and are probably headed to the Great Ohio Desert, and on top of all of this, her parrot, Vlad the Impales seems to have acquired amazing language skills overnight.

The novel is about language and words, and how meaning and meaningfulness are created from language. Wallace spends a long time setting up jokes that further the idea that our function and our context are only created by what we are told we are.

Wallace was a philosopher from a young age, apparently. His interest in language and meaning are fascinating, and when combined with the rather funny scenes, it works. It's a hard trick to pull off, combining philosophy and comedy, exposition and articulate explanations of concepts, but Wallace manages fine.

He's even able to include discussions on the nature of stories, and their power and effectiveness. He provides a short story written by one of the characters, then has the main character complain that it's too much of a short that knows it's a story. Extrapolate that up the levels, and there you have The Broom of the System.

It sounds tedious, what with all the philosophy and metafiction, but it never is. Wallace never tells the reader anything that the characters can't, so the novel is made up mostly of dialogue, kind of like William Gaddis. The playfulness and fun owes a lot to Thomas Pynchon, especially The Crying of Lot 49. But Wallace is his own writer, and nobody would ever say that he wasn't unique. The twisting sentences, the wackiness, the obfuscating choice of words, the humour: these are all Wallace hallmarks.

That's not to say that The Broom of the System is perfect. Wallace juggles quite a few balls in the air, and by the time the novel has ended, he's stumbled with a couple, and purposefully dropped a few in defiance of novel conventions. The trickery and metafiction comes at a price too - we gather from the text that Wallace is incredibly smart, and incredibly arrogant. I felt small when reading this, like Wallace wouldn't have given me the time of day. This is kind of important considering I'm the reader and he's the storyteller; he has a story to tell and the only way to do that is with an audience to hear it.

One of my challenges this year is to read Infinite Jest, and I wanted to start with a smaller Wallace task before beginning the big one. I'm glad I did. I really liked The Broom of the System. I loved its philosophy, I loved the simple scenes that were so effective, I loved the humour, I loved the wordplay. It's an astounding debut novel, one that puts others to shame. It's tragedy that Wallace left us at so early an age.
Posted by matthew.