330 minutes. 5 and a half hours. That's a long time for a movie. I sat through 4 hours of Mesrine, so I thought I could do the same with Carlos, directed by Olivier Assayas and starring Édgar Ramírez. Well, it took me awhile, but I finally did it. 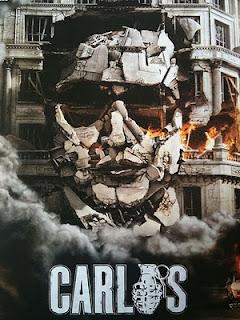 Carlos is about Ilich Ramírez Sánchez, a Venezuelan terrorist who went by Carlos, and then later, people added the Jackal to his name. The first part tracks his rise in the PFLP and ends with his team converging on the OPEC meeting in 1975. The second part follows, in exhaustive detail, the kidnapping of the OPEC representatives and then his attempts to form his own terrorist cell in East Germany. The third part charts his slow decline, with his wife's arrest, and the Western powers pressure on the Eastern Bloc to keep a lid on Carlos.

This is a super international movie with at least seven spoken languages throughout. The locations include Beirut, Paris, Budapest, Syria, Iran, and a bunch of other countries. The cast numbers in the hundreds. This is a big fucking movie and it requires a patient and determined viewer.

It's not just because of the size, but because of the speed. The movie moves through Carlos' life like a bullet. We skip through parts of his life so quickly that sometimes it's hard to keep track of who's who and what's what. His allegiance and his employers change frequently. The film helpfully provides text on screen for almost anybody important, but it's still hard to keep up.

It also doesn't help that we really never get inside Carlos' head. We are kept at a distance throughout most of the film, and only a few times do we catch a glimpse of the man, and not the reputation. We almost never know if Carlos really believes in his cause as much as he says, or if he does it for the fame, or if he did believe at first, but slowly became to enjoy the infamy. We never know if the women in his life are truly loved, or if there's only room in his heart for the cause.

This doesn't detract from the experience. It's Édgar Ramírez's bravura and bold performance that takes us through the movie. It's a complete performance, and maybe one of the most interesting acting jobs I've ever seen. Ramírez just throws himself in the role until you only see him as Carlos. I've seen Édgar Ramírez in other movies, but this is just an astonishing performance. And he does it in more than three languages: French, German, English, and Spanish. Why he isn't nominated for best actor at the Oscars is a question I'll never answer.

The rest of the cast are fairly good. I was never distracted by obvious "acting" and this runs into another reason why I enjoyed the movie so much: it's very gritty and realistic and filmed in the documentary style. It's not exploitative or fawning over Carlos. It's just a representation of the times, of the name (rather than the man) and of the politics.

But it's also damned long. Somehow, details, such as his early life and later life, are painfully missing where other details are head-scratchingly included. (Can you make scratching into an adverb?) I would have loved to have seen more of the formative years, and I could have done without some of the first part's slow pace.

Like I say, it needs a really attentive and determined viewer. It's a marathon of detail and violence and politics and bombs and guns. Overall, it's still pretty fucking good. It's hard to write a ton about Carlos because the movie kind of suffers from sameness. There's a slow progression for the main character, and there's just this sameness of Carlos yelling and preaching and whatnot.

The third mixes it up a little with a bit more in depth on Carlos the man, but still holds him at arm's length. He is no longer operational, and his attempts at safety in Syria, Tripoli, and Sudan are chronicled. He complains of his wife's bourgeoisie but then takes a job teaching, becoming fat and unimportant.

With more information on Carlos' contradictory nature, the third part stands as the best of the three full length movies. It's the most interesting, and features the best performances. It's a fantastic piece.

On the whole, Carlos is a good movie, if a little long. I really enjoyed it, which you would have to if you wanted to sit through 5.5 hours of it. It's exciting, interesting, fascinating, exhilarating and exciting. If you're a fan of Munich, you're going to want to watch this.
Posted by matthew.