Okay, right off the bat, let me get something off my chest. When you take a book out of the library, don't arm yourself with a pencil and make your notations or underline things. That might be one of the most distracting things to do to a book. Whoever took out J. G. Ballard's novel Concrete Island between the years 1976 and 2011, fuck you. First, don't underline words you clearly don't know as to remind yourself to look 'em up. Just fucking look 'em up at the time. Secondly, don't bracket "important" or "significant" passages that point out themes or imagery. And finally, for god's sake, don't fucking write "irony" in the margins so that I stumble across it and then I can't read it for anything other than irony. If you own the book, then by all means, write what you want. My copy of Ulysses has shit on every page. But, if it's a library book, stay the fuck out.

I feel a little bit better after that. I just hate when people do that because it's going to affect my reading experience in two significant ways: it's distracting, and it can colour my perceptions of what I'm reading. That's bad. I like to read and interpret a text for myself, not with the help of some uni student from 1982. 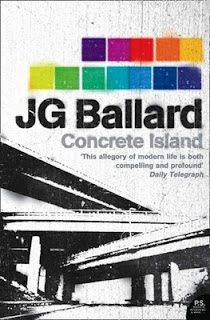 Luckily, this issue really didn't affect my overall opinion of the text itself. Concrete Island, my second Ballard novel after High-Rise, is an interesting animal of a book. Robert Maitland, a 30-something architect, crashes his car between two opposing pieces of a freeway, and becomes marooned on the little concrete island between the two parts. Like a modern day Robinson Crusoe, Maitland must live to survive on the contents of his crashed vehicle and try and find a way to escape.

Ballard had an amazing imagination. The idea seems so simple, as if anybody could have come up with it, but they didn't. Maitland is marooned in a completely civilized area, where there are tons of cars and drivers, but no one will see him because, due to the accident, he looks like a bum. But he's also marooned in the modern day, isolated from the rest of the world by the modern marvels of the technical era. There's a reason why Ballard made him an architect.

There's also some Shakespearean overtones, as Maitland is not only Crusoe, but also performs a sort of Prospero-like role. Without spoiling anything, Ballard's version of Miranda and Caliban make their appearance in the second half of Concrete Island.

But a good setup does not make a good novel, so does Ballard use his setup properly or is he just a one-punch writer? Luckily, not so. Unlike High-Rise, I was enthralled the entire time during Concrete Island. Ballard's prose is clear and his propensity for haunting and ethereal imagery gives each page something memorable or disturbing. The sheer vastness of his darkened imagination comes off the page, and you have no choice but to follow him down every passage his twisted mind comes up with. Sort of like Lovecraft.

Ballard has also done something, which should be mandatory but often isn't. He's followed his own setup through each logical step. The things Maitland does, how he tries to escape, how he survives, it's all very clear and logical and makes sense within context. Maitland never misses out on something so exceedingly clear as to make the reader's blood boil. It's not til the halfway point, where Ballard's macabre interest in psychosis where things end up not quite so logical. The darkness and nastiness of High-Rise is presaged by the second half of Concrete Island.

Not everything is perfect with Concrete Island. The geography of the island itself isn't always clear, and it seems to be as big or as little as the plot needs it to be. I understood it was triangle shaped, but I never knew where all these abandoned buildings fit into the scheme. The second half also suffers from a bit of lagging. This might be because Ballard has to take his time taking Maitland from one point to another, psychologically speaking, and you can't rush such a thing. Because of the odd structure of the novel, with Maitland being the only character for 50% of the book, and then the second half where he is 33%, the novel appears unbalanced. It's a wonky structure, but then again, it's a really hard book to write, I'm sure.

Overall, I really enjoyed Concrete Island. It was a better experience than the last book I read by Ballard, and it makes to want to read more by him. Too bad, people had to scribble their bullshit in the margins.
Posted by matthew.