The Fates Will Find Their Way

Ah, debut novels. If you're like me, you tend to find debut novels to be a collection of short stories that are tenuously linked by character and circumstance. The individual pieces are often great, but the collective whole is ragged and without form. This brings me to The Fates Will Find Their Way, a novel written by Hannah Pittard. 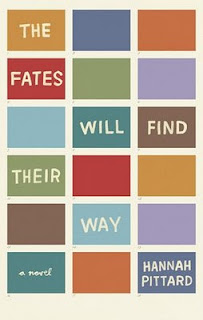 After a Halloween party, sixteen year old Nora goes missing, and is never seen again. She left behind Sissy, her younger sister, and a group of boys, all going through puberty and falling in and out of love with girls they barely talk to. The novel is narrated by a chorus, the first person plural, aka "we" instead of "I" as the group of boys grow up, get married, have kids, and have a life that Nora may or may not have had.

If you're thinking The Virgin Suicides, you're not far off. This is a re-write of the novel, but with the genders switched, and Pittard extends the timeline of the novel much farther. The results? The book absolutely struggles in the second half to maintain any reader's interest when the main characters reach middle age.

In imagining what happened to Nora, the choral narrator envisions a whole future history, including twins, an older Mexican husband, a move to Mumbai, a love affair with a female tattoo artist, breast cancer, and terrorist bombings. The scenes of Nora's imaginary future feel inconsequential and useless, but they're not. They fall under the edict of Alan Moore's "this is an imaginary story, aren't they all?" Which is to say it's hard to fault fiction within fiction for being fiction.

While the Nora scenes care clearly the weakest, the best parts of the book are the beginning, in which Pittard creates an utterly captivating and beautiful world of teenagers falling in love and being obsessed with girls. It's heartbreaking and uplifting and delicate. She completely nails writing a group of boys, and somehow manages to keep girls at arm's length, making them into creatures of beauty and mystery that the boys become obsessed with. Just like in real life.

But the novel is still a bunch of short episodes tied together by the missing girl. Each little scene, in the first half of the book, is exquisite, but it hardly adds up to anything other than here's a bunch of boys being creeps. Certainly a couple episodes feel like they were written prior to the novel, and then forced into the narrative, no matter how jarring the juxtaposition is. One particular episode last twenty pages, is never picked up again, and feels extremely left-field.

That's not the say that the novel is bad. Nor is it good. It's fairly middle of the road, to be honest. Pittard's prose is perfectly acceptable, and her dialogue is hit or miss. But there's potential here. Pittard could go on to write a fantastic sophomore effort, and I would gladly give it a try.

The Fates Will Find Their Way is a decent first novel, mostly a handful of stories tied together or forced together. There is a ton of potential here, and it is worth keeping an eye on Pittard.
Posted by matthew.