I have this boxset, published by Penguin UK, that has all of Ian Fleming’s work on Bond, all in handsome paperbacks. I’ve had it for years. Never read one. Not once. The thing is, I have a bit of a complex relationship to the Bond movies. For every fond memory I have of a Bond movie, I also have a bitter memory at the cheese, the comedy, the aged leads bedding women 20 years their age. When you really put your mind to it, how many excellent Bond movies are there? Four? Five? Some of the Bond movies rank as terrible and embarrassing for all those involved, but since it’s Bond, people tend to cut it some slack. Not me. If I don’t like something, I make no bones about it. With this in mind, I thought I’d give the literary Bond a try. I wanted to read one of the books that has an awful film counterpart. What better example than 1979’s Moonraker, adapted from the 1955 novel of the same name? 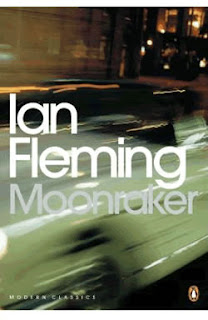 Bond has just come off two weeks’ leave after his tussle in Live and Let Die. M asks him to help ferret out a cheat at cards at the most exclusive club in London. The cheat is none other than Hugo Drax, a mysterious metal magnate who has indelibly helped Her Majesty by building a super rocket able to target any European city. Once Bond teaches Drax a lesson in cards, he becomes entangled in investigating a coincidental murder at Drax’s lair in the cliffs of Dover. Bond meets Gala Brand, a mole planted by Scotland Yard, and they try and figure out why there are so many damned Germans running around and who’s trying to sabotage the rocket.

What a weird novel. I have to say, right at the outset of this review, how difficult it so to read a James Bond novel and review it without all of the baggage and prejudices and assumptions that come with the brand of 007. It’s almost impossible to read this and not think of how the movies did it, or where his Walther PPK is, or his Aston Martin, or his signature drink, the vodka martini, shaken and not stirred. All of these iconic elements are missing from the book, and it’s quite disorienting.

That’s not to say that this isn’t James Bond. It truly is. He’s got the same swagger, the same confidence, the same panache that makes Bond, well... James Bond. Other than his iconic elements missing, there are a couple things lacking in this literary Bond. He’s not having any fun.

I excoriate James Bond movies for being cheesy and including bits of camp and poorly staged comedy, but that’s part of the charm, I guess. Even the dour Daniel Craig Bond movies have their moments of levity.

Moonraker, the novel, is missing the quintessential factor of fun. Bond goes about his business in a businesslike way, even bedding the girl without any smile or joy. Now, this might be because of Fleming’s characterization of Bond, which I’m told evolves with the books. My father has read them all, and said reading them in order strengthens the picture of Bond as a man who wears the crown of 007 with a weary head. But that doesn’t seem to be the case here. He's just a dour, sourpuss of a man pushing his way through a plot.

Maybe it’s because Moonraker is only the third Bond novel, and Fleming hadn’t figured out his voice or his leading man. That’s possible. It took the Bond movies about three tries before settling on a formula and a pattern.

It’s also difficult to review this because the lead villain is a Nazi. Spoiler alert for a 60 year old novel. In 1955, Nazis were still a perfect go-to villain. For awhile, there was no better enemy than the Third Reich. It’s too bad that in 2011, Nazis have become tired and clichéd as the opposition. It’s hard to take Drax’s scheme seriously because of his Nazi affiliation. It’s also not hard to figure out the scheme pretty much right from the beginning.

All of these things are just odd bits of a larger picture. Most importantly, the question remains – does Moonraker work as a novel? Yes and no. While Moonraker is consistently readable, there are a couple fatal flaws.

Firstly, Fleming is not a spectacular prose writer. His descriptions are flat and lack any spark of style. His characters all speak the same, and his grasp of characterization is fleeting.

Secondly, and this flows from the first, his choreography of action sequences is not very good. When things are happening, it’s not always clear what’s happening, and that’s just a matter of style and control of the narrative.

The other thing that bothered me about Moonraker, and this might be because of movie-related baggage, but I found the scale to be quite small. There’s really only a handful of characters with speaking parts, and the majority of the second half of the book is concerned with only four people. Plus, the location remains steadfastly in England - no globe-trotting. For a James Bond novel about a rocket that could blow up any European city, Moonraker doesn’t set its heights very high. Again, this might be because of the movie, in which there’s chase scenes all over the world and a climax featuring a space battle akin to Star Wars. The sense of disappointment is quite palpable.

I didn’t hate Moonraker, even though I’ve written 900 words so far about how I didn’t like it. I mentioned before that Moonraker is always readable. This is one of the fastest novels I’ve ever read, 300 pages just whooshes by. For all my complaints about the scale, the prose, and the coherency, one has to admire everything Fleming did right: namely, invent James Bond and all his crazy adventures.

Moonraker is just so damn cool. Even with the diminished scale, the novel oozes cool. Bond is cool, and he’s the man everyone wants to be. He’s sexy, scary, suave, professional and a total badass. It’s hard to fault Fleming for resting a entire novel on the shoulders of one character, let alone twelve novels, but he makes it work if only because Bond is such a perfect character. I’m sure tons of people have written about the popularity of Bond, so I won’t add my small voice to the deafening crowd. Suffice it to say that Bond rules because he’s Bond.

I liked Moonraker, despite my problems with it. I’m going to be charitable and ascribe the novel’s failings to my expectations, which are a very strong force in reading a novel. I’m definitely going to read another Bond book, but this time, I’m going to keep my expectations in check and try and enjoy the novel without the burden of a 007 movie playing in my head. It’s funny that in the first paragraph, I said that I cut no slack for things, but here I am apologizing for Fleming’s shortcomings. Like I say, the sheer force of the creation of Bond is almost enough to apologize for itself. We’ll see when I read the next Bond adventure, like they say at the end of the credits.
Posted by matthew.