And speaking of debuts that are short story collections, here's James Franco's first book. Now here's an interesting guy. He has an MFA, he's working on two others, he paints, he draws, he directs, he acts, he dances, and he writes. Apparently he writes a lot. A good many people will have some fun tearing down Franco because he's doing all these things, trying his hand at everything. It's jealousy. We want the successful to fail. Well, I'm going into this with an almost open mind. I'm somewhat prejudiced because I admire Franco for being so multifaceted. If I was a celebrity, Franco is the closest kind I would want to be. 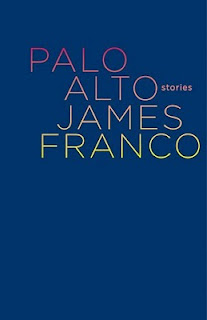 In Palo Alto, we follow a group of teenagers growing up, drinking, having sex, fighting, and being that stereotypical emptiness that characterizes literature from California. The stories range from short to medium, feature the same group throughout the book, and are all narrated in the first person.

When I started reading these, I thought to myself, "wait how the hell did Franco get a hold of the stories I wrote when I was sixteen?" because once I had read Bret Easton Ellis, I wrote a thousand pages of this crap. Nihilistic empty vacuous teens doing terrible things and never feeling immoral for it.

The difference between Franco/me and Ellis is that Ellis is at his heart, a moralist. A pretty strict moralist, actually. Ellis uses satire, comedy, violence, heartbreak to get across that this shit will not stand, man. These people are empty for a reason.

Only a couple stories manage to dig past simply surface details. In one story, Lockheed, a frumpy girl with no friends makes a very quick connection with a bad boy at a party. That connection ends as soon as it begins because the bad boy gets into a fight and then gets run over by an SUV. The heartbreaking moment, where Franco achieves a moment of genius, is when the cop is questioning the girl.


I told her about when Ronny and I were talking on the couch. She asked if I was Ronny's girlfriend.
I said no.
Did I know him pretty well? No, but.
"But what?" she asked.
"Well, he told me I was smart. I mean, I think he liked me." She looked at me like she didn't understand what I was saying. Then she thanked me, and said she would call if she needed more information.
She never called.

That's perfect. The blurting of the detail to the cop is just fantastic. Without making the girl tell us how lonely she was, Franco shows. Showing, not telling. That's a really hard thing to do and Franco effortlessly pulls it off.

The other story that's pretty strong is April, a longish short story about a young man who gets forced into community service due to his reckless driving. He's particularly interested in this girl April. The story is split into three sections, with the first two narrated by the guy, and then the final section narrated by April. The final section details how April got into a sexual relationship with her soccer coach. It's distressing and quite nuanced, and it works with the other two sections as a way to show how April isn't okay. It's almost like a punchline, but it's not funny - it's fucking devastating.

Other than these two stories, the quality of the pieces range from acceptable to somewhat irritating, such as the one where the nerdy kid buys a gun to shoot a bully. The diction is just way off, moving from excellent to sub-human, and Franco never makes the reader wonder anything beyond, "I guess this kid's fucked up". A short story about a shooting at school has to be really ballsy and say something other than "both kids, both victims, one of bullying one of shooting, are the same".

Franco has a voice, but it's the same toneless voice that Ellis and his followers use. It's not a bad voice. It's been around longer than Ellis has, for sure. In certain spots, Franco wisely looses that cadence Ellis uses, and goes with more attention to physical details. Franco's voice is evocative of time and place, but not necessarily of character. These kids are all shadows who live in the dark.

Palo Alto is not a disappointment, but it's also not revelatory. While certain moments have their brilliance, the overall affect is one of reiteration. I've heard these stories before - Franco didn't add much to the canon. I'd prefer to see Franco write something other than his childhood. Maybe then we'd see him really stretch those literary muscles and give us something other than gangbangs and fleeting references to Faulkner.
Posted by matthew.