The Stuff of Thought

Steven Pinker has got to be one of the coolest professors ever. I read The Language Instinct when I was in high school thanks to Snow Crash by Neal Stephenson. Pinker's non-technical overview of linguistics, along with Stephenson, absolutely shaped my conception of words and writing and speech from then on. When I hear certain things, I wonder what Prof Pinker would say about it. Pinker holds a spot in my personal pantheon of science-gods, including Sagan, Hawking and Dawkins. That being said, I've only ever made it through that one book by Pinker. Until now. I finished reading The Stuff of Thought and I'm going to review it.

Before I do so, I have to say a word or two about the fact that I'm reviewing a nonfiction for this blog. This might be the first time ever. The last nonfiction book I read to completion was Blake Bailey's biography of Richard Yates (also the first biography I ever finished) and before that, in the pre-blog era, was Dawkins' atheist manifesto. I've never formally reviewed a nonfiction book, so this is my first stab at doing so. 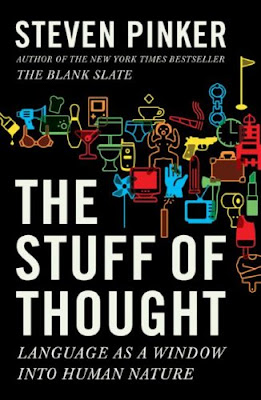 The Stuff of Thought is concerned primarily with... ugh... the stuff that makes up thought and how that translates to the language we use in every day use. Pinker takes us through an overview, in which he examines the 3.5 billion dollar lawsuit over whether the 9/11 attacks are one event, or multiple events. Once he sets the stage, he goes through a lot of technical concepts about verbs and how important they are. Once he has that out of the way, he gets to the fun stuff, like swearing, metaphor, euphemism, whether or not the Sapir-Whorf hypothesis is bullshit, and all sort of other things.

Reading something by Pinker is a guarantee of witty and crisp prose, intelligent discourse, and material taken from the most technical fields of academia to the most common and used parts of everyday speech. His interests are wide and he appears to be a voracious collector of phrases and words, tucked away and displayed later for amusement and didactism.

However, the same problems that plague The Language Instinct appear in The Stuff of Thought. Pinker loads the front of his book with a ton of technical linguistics, just like in the other book, except with less math. This is in violation of a stylistic rule that Pinker himself brings up, which is to stack the hardest material at the end of a book/paper/essay.

Pinker also tends to get bogged down in other people's pet theories, completely content to chip away at their work, until the point is belabored. When Pinker takes his hatchet to Whorfian concepts, it's a long road until Pinker feels satisfied. He uses a logician's tactics to dismantle the idea, and then proceeds to just keeping going and going and going. I got it. I was convinced that the Sapir-Whorf theory is bullshit in the last book, and it didn't take much logic and reasoning to further debunk advancements in the field in this book.

The best part of the book comes near the end when Pinker sinks his teeth in why we use metaphor or veiled phrases such as "Would you like to come up and see my etchings?" and why swearing has such a strong reaction in listeners. In order to get to this delectable section, you have to grit your teeth and make it through a long section on language's usage of time and space and causality.

Pinker gives an overview of Kantian concepts of causality and knowledge, and it's all very good, but it lacks sexiness. It's just not sexy science. I want to know why the etching line works and why fuck is so awesome. I don't need "correlation does not mean causation" repeated a hundred times.

He also debunks relativism with logic. Really? Relativism? I was taught not to use relativism in any argument in my first week of Intro to Philosophy. That's the first lesson.

The Stuff of Thought is a good popular science book. It's not overly technical, but it's also not an overview like a magazine article. One has to go into this book knowing something, anything, about modern psychology post-Freud and Skinner. Although there are a few missteps, Pinker's style is still the go-to style for linguistics. There are no other contenders to the heavyweight belt of contemporary nontechnical linguistics writer. Have you ever tried reading Chomsky? It ain't as easy as Pinker.
Posted by matthew.