Yes! Finally did it! Finally finished reading a John le Carré novel. I bought this beautiful hardcover omnibus called The Quest For Karla about two and half years ago. After a few false starts, and an attempt at reading a different le Carré, I just plain gave up. For a bit, I even thought I had sold the omnibus. When I was cleaning out my storage closet, there is was, and I knew it was a sign from myself. 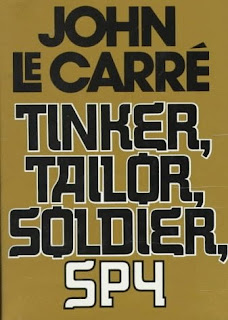 Tinker, Tailor, Soldier, Spy is concerned with George Smiley, a frumpy, middle-aged, cuckolded husband, who's also a decently high ranking spy for the British government. When his former boss screws up a mission, the house is cleaned, and George is forced into retirement. A mid level operative comes to George, thinking him one of the last trustworthy spies, and offers him a story about how there's a mole at the top of the chain. George must figure it out and flush out the mole before any more damage can be done.

I guess one of the reasons why I tried so many times and failed was that le Carré's style is just so... odd. It's hard to pin it down, but it has to do with le Carré's dialogue style, which is often circular and obtuse, as the spies rarely talk about things directly, and the sheer amount of jargon they use. This isn't a bad thing, but it was off putting at the beginning, as I had no fucking idea what was going on.

For a book only 250 pages, there is a ton of characters, a ton of backstory, and an exceedingly complex mystery that is unraveled in a good clear manner. The problem is that the complicated plot, combined with the jargon-heavy exposition causes a bit of grief with the uninitiated. However, the opacity of the narrative gives it believability, and thus makes it more entertaining.

Other than the suspense of wanting to know who was the spy, (the solution to which was spoiled in the biographical article of le Carré - thanks, anonymous writers of Wikipedia), the other enjoyment of reading this book is the writer's clear mastery of drafting characters. While there are a lot of them, and they all have multiples names, most stood out, not as a type, but as a fully fleshed character. To do so, le Carré gives them different dialogue, speech traits and tics. It's a classic author's trick, and le Carré uses it perfectly.

Another aspect that works well with Tinker, Tailor, Soldier, Spy is the ominous implications around the idea of a mole. The conspiracy is so vast and so dark that it just pulled me right in. I was excited to read this book. Pure unadulterated excitement. I wasn't thinking of technique, or imagery, or metaphor - I was enjoying the ride. But that isn't to say that there isn't technique with this book. It's just, le Carré knows his audience and puts the intrigue right at the forefront.

There's really not much to say other than I enjoyed Tinker, Tailor, Soldier, Spy. I found it confusing and disorienting sometimes, but other than that, I had a great experience. I wish the solution hadn't been spoiled for me, but what can you do? I'm probably going to read another le Carré soonish and maybe give a James Bond novel a try, just for contrast. Thanks for reading.
Posted by matthew.