Let's get this out of the way first... Tron, the original, is not a great movie. It looks amazing, and still does, but its story is bland, and it is damned slow. Extremely slow. And this isn't because I'm of the me-generation where everything has to be instantaneous. It's because the movie is just slow. I don't much care for it. But when I saw the trailers and the posters for the sequel, I was extremely intrigued. The visuals alone made me a fan. I knew I was going to like Tron: Legacy even if the story sucked. Then, someone told me Daft Punk was doing the soundtrack. Oh my fucking god that's perfect. 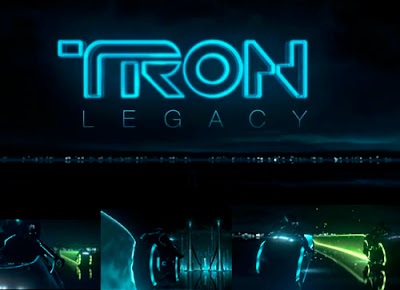 So was it worth it? Let's start with the 3D aspects of the movie. Most of the movie was filmed for 2D, and only certain sequences were 3D. You'd think that a movie that's mostly digital wouldn't have that problem - that it would be entirely 3D, but alas, that's the not the case. Neither are the 3D sequences even that noticeable. The depth of image is only slight. The action scenes are filmed extremely kinetically, so there is almost no instance where the viewer can appreciate a depth of field. It's disappointing to say the least. This means I could have seen the movie in December in a regular theatre and had the same experience.

And what experience would that be? Was is good? Was is terrible? Did it live up to my exceedingly high expectations?

Yes and no. Visually speaking, this is one of the greatest looking movies I've ever seen. In fact, I'm going to say it right now. This is the best looking movie I've ever seen. Every frame in the digital world is soaked with gorgeous imagery, glowing lines and darkness so perfectly aligned. Even the scenes filmed in the real world are just simply stunning. I read somewhere that Tron: Legacy is filmed in an aspect ratio not often seen anymore, and it shows. Without any sound or text, I would have simply enjoyed the movie for its looks.

But that's not a whole movie. Does Tron: Legacy deliver in terms of story? Well, this is where the "no" answer comes in. Let me qualify that "no" and unpack it a bit. It's not the greatest story ever written. It's rather simplistic and takes its cues from numerous other sources, not including a scene lifted from The Matrix: Reloaded, another sequel using colons.

Some implications of the story are barely teased out, leaving me with moments where I was thinking of how I would have written the scene to expand on some concepts it touches on. For instance, one of the main elements of the plot are self-aware programs who were immaculately conceived and have data structured like DNA. At no point does Tron: Legacy find itself exploring that. Instead, we have Jeff Bridges lecturing how important it is - a case of telling rather than showing.

For a movie about the most important technological breakthroughs in human history, it's lacking in that fundamental futurism element that separates space opera from real sci-fi. The writers would have done well to consult with William Gibson or Neal Stephenson before delivering their final product to Disney. Both those authors come up with crazier shit on a daily basis than the elementary sci-fi in Tron: Legacy.

However, the story isn't a complete dud, which is why I wanted to unpack my "no" answer of quality. Flynn's son, Sam, enters the Grid to find his father, meets C.L.U. the evil avatar of Flynn, and then Sam, Flynn and a self-aware program must find a way to escape The Grid, defeat C.L.U. and save the world. Yes, it's basic, but it does entertain. The plot takes you on some familiar paths, but it does so with decent dialogue, and a good investment in character....

Save for Sam, the main character. He is as blank as characters come. We don't really get any sense of who he is. We're told a couple times by the screenplay and by other characters who he is, but we're never shown. He just does what he does because it's in service of the plot.

Jeff Bridges, in a dual role, plays Flynn and C.L.U. What's most astonishing about his performance isn't his acting skill at all, but the fact that Disney convinced him to come back at all. I'm being snarky - his performance is good, which echoes of automaton and echoes of The Dude, if you can believe that.

With a mix of CGI and old fashioned acting, his performance as C.L.U. works because C.L.U. is a mix of the familiar and the unfamiliar - which is to say, psychologically speaking, the most frightening of all. We never get inside the program's head, and that's what makes him a good villain. He moves and talks like a human, but it's all a facade, and it works.

Indeed, the best parts of the movie are C.L.U. and the action scenes, which are just gorgeously filmed and coherently choreographed. Viewers will always know what is going on and they can follow easily. The action bits are also pretty intense. The light cycle sequence is thrilling and conveys a palatable sense of danger. Something that's tough to do when the entire screen is just zeros and ones.

Tron: Legacy is an odd film. It's a sequel nobody asked for. While the film is about computers and games, it seems oddly retro in its approach to technology. The craziest things are happening in computer science, and Tron: Legacy happily ignores them. It's also an odd film in this post-Matrix world. This sequel did a lot of what The Matrix trilogy did, and The Matrix did a lot of what Tron originally did. Echoes of each other reverberate through all of the aforementioned movies. I'm not going to start the "nothing's original anymore" argument, because frankly I think it's bullshit, but I am going to comment that Tron: Legacy seems to be without purpose, especially if The Matrix and eXistenZ did a lot already.

This doesn't take anything away from Tron's stunning visuals and great action scenes. I loved Tron: Legacy, even if I complained for half this review. I will no doubt purchase it on Blu-Ray and there's a chance I might go see it in the cheap theatres, if it's still there.
Posted by matthew.