I suppose after being so critically acclaimed, I would have to see the movie. I'm not really interested in ballet or Natalie Portman, but I am a fan of the director, Darren Aronofsky, except I haven't seen his movie about wrestling. Anyway, so here's my review of Black Swan, recipient of Best Actress for Natalie Portman. 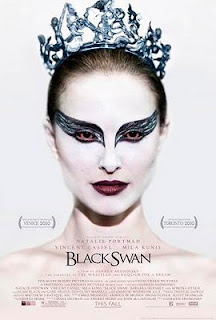 Nina is a beautiful but overly technical dancer. The director of her company, Thomas is mounting a reinterpretation of Swan Lake. After the lead dancer is given the short shrift, the lead is open, and Thomas casts Nina as the Swan Queen, even though she doesn't display enough passion to do the dual role of the Black Swan. Lily, a beautiful and mysterious dancer from another company arrives, and is cast as Nina's alternate. Both Thomas and Lily attempt to bring Nina to a more passionate world, one where she can play the more sensual and erotic Black Swan. In addition to her mounting suspicions that Lily is trying to take over, Nina must also deal with accumulating physical problems, such as her toes mysteriously webbing.

I'm not even sure what to say about this movie other than it was fucking weird. Very fucking weird. Nina's tenuous grasp on reality slowly deteriorates while simultaneously becoming more aware of her physicality and eroticism.

This movie is all over the place. It's a gothic melodrama, and I mean melodrama, full of loud strings and passionate moments of excitement and the darkest emotions one can feel. It's full to the brim with paranoia. Nina keeps seeing doubles around her, seeing her own face everywhere, her reflection doing things she would never do.

But where The Fly is concerned with heartbreak, Black Swan is intent on fucking with your mind. Reality is in the eye of the beholder with this movie, and it is what you make of it. Is Nina actually transforming into a swan? Is she actually falling apart? Or does she just think she is?

It gets weirder in the last thirty minutes of this movie. Very weird. I'm not going to spoil the end of the movie, but suffice it to say that grand guignol and chiaroscuro elements come full force. Giant music just blares at you as Nina goes off the deep end, the lighting changes from stark to blood red and night blue.

An interesting element of the photography is how close the camera sticks to Natalie Portman. For a good portion of the film, there are only a few variations on shots, and the most common one is a tight close-up of her face. Sort of like the poster. We never stray far from her head, even during the dancing parts, when Aronofsky uses a handheld style to try and get as close as possible, sort of like Scorsese's Raging Bull.

I enjoyed the movie. I guess. I don't know. It struggled to keep my interest during the more down to earth segments, and I was never very invested in Nina as a character - a fatal flaw considering she's in every single scene. What I did enjoy were the elements of body-horror, one of my all-time favourite subgenres. My comparison to Cronenberg isn't really that far off.

The most frightening thing in the world is when the thing you trust the most betrays you: yourself, your mind and your body. Nina is falling apart mentally and her physical state mirrors that. Her own decay is so absolutely fascinating, and Aronofsky keeps the viewer as close to Nina as possible as to avoid any semblance of outside reality seeping in.

Did Portman deserve her Oscar? Why the fuck not. The Oscars are totally irrelevant. It's not a measure of skill or merit. It's a bizarre reward for being in prestige films. Oh well.

I liked Black Swan. I'd like to see it again so that I can appreciate the finer details that Aronofsky built into the film. While I found the usual artists-being-babies plot to be a bit tiresome, I was utterly captivated by the thriller elements. Polanski may have found his successor after all.
Posted by matthew.