The Complete History of Jack the Ripper

Let's talk genre for a minute, you and I. Okay? Great. Genre is very important, and it's something I tend to revisit every once in awhile. Certain books fall squarely into a genre and fit there comfortably. Others tend to straddle the borders, one foot here, another foot there, etc. Some books purposefully challenge notions of genre. The Complete History of Jack the Ripper by Philip Sugden is certainly one that does, not that you'd think it from its classification in the library. 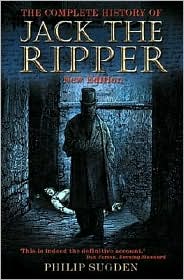 The most knowledge I had about Jack the Ripper came from Alan Moore's From Hell, which uses Stephen Knight's The Final Solution as its foundation. In the first ten pages of his book, Sugden immediately does away with Knight's proposed masonic/royal conspiracy. Sugden is a historian, not a theorist, a novelist, a fabricator, or a journalist.

You see, this distinction is key for reading this book. This is not true crime. This is clearly history, and it's the work of a true historian.

Over the course of 500 pages, Sugden lays out every tiny piece of evidence that has ever come into contact with a Ripperologist, and Sugden uses his training as a historian to sift through this evidence, sort it out, and determine what is relevant to the case and not to amateur sleuthing. He goes through every source document possible, and he wades through an incredible amount of secondary sources. On top of all of the original research, Sugden even reads every important Ripper book, from the oldest, to the most ridiculous. He's a true historian.

And because of this, most of the book involves Sugden bemoaning the lack of historical evidence. More source documents are lost to time than are preserved when it comes to CID's investigation into the Whitechapel Murders. This book is the sad story of how time marches on and makes the past even more inscrutable.

The secondary theme is that of humanizing the people involved in this tragedy. The victims' lives are all laid out for the reader, from the earliest known piece of evidence, to tracing their final steps on the night of their murder. The oppression of the tragedy falls onto the reader, which is clearly the point. This isn't a true crime paperback that revels in the gore and the gothic and the violence. This is a history of the victims and a history of how the police tried to catch the killer.

It's also a history, and not a true crime expose, because Sugden is extremely cautious to identify Jack the Ripper. At the end of the book, Sugden lays out the suspects that contemporary police thought was the Ripper. In keeping with the rest of the book, Sugden methodically dissects each stack of evidence against the suspect and eventually comes up with nothing. He's very careful to say that one person fits the bill closest, but there isn't any physical or documentary evidence to actually posthumously convict anyone. Ultimately, the Ripper case will end up being a mystery for all time, but Sugden is hopeful that maybe one day, evidence will be unearthed to clear it up once and for all.

I've never read such an exhaustingly overwhelming history book. The detail is stunning. Luckily, Sugden's wry and tasteful style never bores the reader. Sugden is remarkably good at the cutting turn of phrase that writers such as Wilde were experts at. He is able to dismantle an entire book with a scathing sentence. He also does the hard task of humanizing the participants, the sign of a true historian, who brings the past to life with research, ethics, and a purpose. Sugden conveys the tragedy that was the Whitechapel Murders so eloquently.

The Complete History of Jack the Ripper does what it says on the tin. For any students of history, or any casual observer of Victorian England, this is a perfect gateway to another world that seems to tantalizingly close, but never quite there.
Posted by matthew.