I wanted a comedy. Something easy to watch. I chose Easy A, starring the gorgeous and funny Emma Stone. I thought it was going to be funny and breezy and I might just learn a little lesson after all is said and done. Unfortunately, all was not meant to be. Let's dive in, shall we? 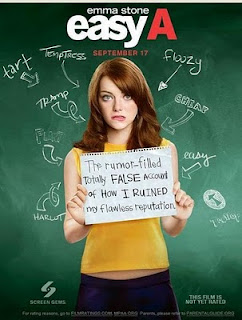 Olive is an invisible entity, listlessly drifting through high school with no boyfriend, one good friend, and a family that loves her. On a whim, she lies that she lost her virginity to a college boy. When she confesses to her gay friend, he sees an opportunity. He asks that she fake sex with him so that he can pretend to be straight. Once Olive does this, more and more losers come up to her and pay for the right to say that they've had sex with Olive. As the religious nuts in her school try to bring her down, and the boy that she actually likes drifts further away, Olive is getting in over her head.

Okay, so the reason why the movie is called Easy A is because there is a tenuous link between this film and Nathaniel Hawthorne's The Scarlet Letter, one of the greatest works of literature ever. I read The Scarlet Letter for university and we spent a lot of time on it. I can confidently say that I'm familiar enough with it to say that any links between the novel and Easy A are completely superficial.

In The Scarlet Letter, Hester Prynne has an affair with the minister, produces a child, and is shunned by the community. She is forced to wear a scarlet "A" on her clothes and take her punishment with silence and heart. But, as Hawthorne explicitly states in the text, reading symbols at their surface is a dangerous thing to do. Yes, the narrator explicitly tells the audience not to read too deep into the symbols that plague the community. The two biggest symbols in the book are the letter "A" and Hester's daughter Pearl. Both are products of a strong womanly hand. The link between the two cannot be overstated. Hester's skill at embroidery are unmatched and her "A"s tend to transcend clothing and reach paroxysms of high art. The same can be said of Pearl, who is a beautiful, radiant child full of smiles and good cheer, despite the community's passive aggression.

I don't mean to make this entirely about The Scarlet Letter, but I do want to make this point. There's too much conflict in Easy A's subtext for the movie to make any sense. Is Easy A about the empowerment of women? Or the enslaving of women to a society obsessed with sex? Is Easy A trying to say that sex is dangerous or that sex is natural and beautiful? Is Easy A trying to say that lying to everyone is worse than lying to yourself?

None of these ideas purposefully poke their head out of the miasma of bad jokes and sunny California locations. It's a mess of sexual subtext. And it never once addresses the double standard that persists in North American society.

At no point does any character take a moment to ask if female sexuality is inherently good, bad, or just a thing that exists. Olive just traipses around in her slutty clothes, letting the rumour mill run, but she never stops to think that being sexual isn't a bad thing. She studiously avoids losing her virginity, maintaining it in her mind, but in public, lets every fat loser stick their dick in her. While Olive thinks that she's challenging social norms by sewing "A"s into her clothes, she's actually just playing into the patriarchal tyranny that infests the high school society.

There's a disturbing scene in which Olive finally gets asked out on a date, and she goes to a lobster restaurant with some cute guy that's never expressed any interest before. After the awkward dinner where it's clear the cute guy has nothing to offer a girl of wit and intelligence, the guy gives her a Home Depot gift card and tries to make out with her. He's confused the reality (paying for fake sex) with the rumour (actual sex), which means he's paying for real sex. It's disturbing because this is a real fucking possibility. The guy keeps trying to kiss her and nobody in that goddamn parking lot did anything to help. Olive is almost raped, and the movie just moves on from there.

You know what would've been a better movie, far more progressive and true to real life? If Olive had lost her virginity and told her friends about it, how it was shitty and unromantic, but at least it was real. Then she could have challenged social norms by being open about her sexuality and confronted people with their repression. Not only would this have been more emotionally honest with the audience, but it would've been closer in theme to The Scarlet Letter. Hester Prynne never once lies about what she did. She wears her badge of shame and challenges its authority by proudly displaying the beautiful product of the adultery.

The sexual atmosphere in North America is dangerous right now. While many people are doing whatever the fuck they want in their homes, which is their business, there is a small minority of people out there telling everybody else that sex is bad and that anything other than heterosexual missionary is morally repugnant and pure deviancy. This movie is playing into that hand. This movie is telling people that sex is dangerous, even fake sex is dangerous. Look at all the lives it ruins.

The two most positive characters in the movie, and the funniest, are Olive's parents, played perfectly by Patricia Clarkson and Stanley Tucci. Both of the characters are open about their sexuality, how they experimented with the opposite sex, how they like sex, how the mom was a "slut" if only because she liked to have sex. They're even okay with Olive having a gay boyfriend. I admit that these characters are moral center of the movie. I admit that this movie isn't pure poison, that it isn't Republican.

But there isn't enough of these two characters. Olive learns some lessons about lying to herself, but she never fucking understands that sex isn't goddamn dangerous. She just dives into a relationship with a hot guy who makes irritating references to John Hughes movies. She says at the end of the movie that she will probably lose her virginity to this guy sometime soon, sometime in the future, maybe when they get married.... AH! Is it such a big goddamn deal? You've totally missed the point, Olive!

Why didn't this movie confront social norms by asking if it's so bad to be sexual? Why didn't anybody in this entire movie ask of themselves, "hey good for Olive, I guess? If that's what she wants?" Why didn't anybody think to themselves that maybe having sex is natural and nothing to get all worked up over?

I worry about our society sometimes. I worry because of rape and sexual abuse and of gay-bashing and of general intolerance.

Anyways, the movie's kind of funny and has some great lines, but nothing special. Blah blah blah. It's got some fucked up sexual politics though and it made me mad. Can't we show sex in movies to be what it is in reality? Sometimes beautiful, often hilarious, sometimes sad and angry, sometimes awkward and often pleasant! It's our biological imperative and yet we're obsessed with obsessing over it.

That's the end of the review, almost 1400 words about how this movie misunderstands The Scarlet Letter, but I wanted to mention something sort of related. The judge who said that the girl was asking for sex by dressing like a slut? He's an asshole, but that doesn't mean we should threaten his life. But rest assured, he's a fucking asshole.
Posted by matthew.

I just saw this film on Netflix and I was so appalled I googled "Easy A sexual politics" and found this. Wordy word to everything you say. I can't believe none of the mainstream reviewers brought up these issues when the movie was released.

Thanks for the feedback! Yes, I'm not sure why no other review seemed to find the film icky. I would recommend you steer away from Sucker Punch, which is even more offensive.