Hell at the Breech

Readers of this blog will remember that I have a thing for Southern fiction. Tom Franklin had been recommended to me, but it's taken me awhile to get around to reading his debut novel, Hell at the Breech, but I finally did so let's take a look. 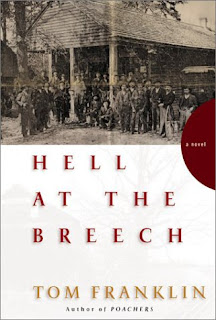 It's 1897, and the white rural poor of Clarke County, Alabama are getting sick and tired of the white land owners jerking them around using the law and using them as indentured servants. After one of the well-liked store owners gets killed, his brother organizes a vigilante gang called Hell-at-the-Breech. The gang begins to terrorize the richer men, and coerce the reluctant to join their ranks. Only Sheriff Billy Waite, old, drunk and about to retire, can see both sides and tries to maintain the peace, but the blood is flowing freely.

One of the reasons why I like Southern fiction so much is because of the colourful characters. Faulkner, O'Connor, Styron, all these greats, not only were they adept at prose (in fact, experts), but they populated their books with clearly defined and beautifully drawn characters. Even though I haven't read The Sound and the Fury since I was 19 or 20, I still remember Quentin Compson and I can still see him pulling that stupid watch out of his coat for the hundredth time. I can still see the Loftis family of Lie Down in Darkness as they yell at each other. And I'll never forget the grandmother in A Good Man is Hard to Find.

Franklin may not have the prose as perfect as his Southern brethren, but his skill at drawing characters is, frankly, amazing. At first, Franklin introduces a huge cast of Southern folk and moves the narrative back and forth in time, so it's hard to keep track of everybody. Slowly, throughout the middle section of the novel, Franklin keeps delineating each and every person until they are an entire county of living breathing people. Billy Waite, the most McCarthy-esque of the cast, could stand beside Quentin Compson and Peyton Loftis and Anse Bundren and even John Grady Cole. He's an amazing character.

The other reason why I like Southern fiction so much is that it never ever shies away from violence, and this novel has it in copious amounts. It's a strangely cinematic novel, which is interesting because of its pace and it's really a character study of the two protagonists. When the violence comes, Franklin shows himself to be an expert at choreographing action, letting the reader understand and see where everybody is. Not very many authors can handle action scenes, especially of the complexity that occurs in the final scenes of the novel. Regardless of the coherency of the action, Hell at the Breech is an staggeringly violent novel, filled with more bloodshed than... well, than a McCarthy novel (save for Blood Meridian maybe).

But is there anything to Hell at the Breech other than some cowboys and farmers shooting it up? Well yes and no. I'm hesitant to conclude that this novel says anything particularly profound about the economic struggle of farm folk in the late 19th century. This is a theme that Faulkner did over and over again, and he frequently contrasted the colourful salt of the earth folk with the slow decay and crumble of the Southern lifestyle. He was concerned with the decomposition of an empire. Franklin's sights aren't set as high, it seems. He wants to tell a ripping good yarn (and succeeds mostly) and I think he wants to say something about morality and manhood, pet themes of McCarthy as it were. Waites, the sheriff, is constantly up against the limits of the law, being forced by the rich to use the law, and these actions often force Waites to question his own lawfulness. Where does law come from? From government, from God, or from real justice? That's the major question that the novel asks, but Franklin never quites unpacks his thoughts on the matter, and keeps to a hail of bullets. This isn't a major criticism, certainly not fatal.

Hell at the Breech is a pretty damn good novel. I was enthralled and excited for most of the book, and was completely drawn into the characters thanks to Franklin's success at creating his cast. I am definitely going to be reading his next novel.
Posted by matthew.