I imagine that when production offices for Jackass 3D opened, the boys stood around, giggling about their upcoming plans, and then looking around and said, "Fuck me, has it really been ten years?" Time must fly when you're hitting each other in the sack and getting bit parts in shitty movies like Men in Black II. Yes, Jackass celebrated ten years of easy targets and dick jokes, to do so, they crafted their newest film in 3D. 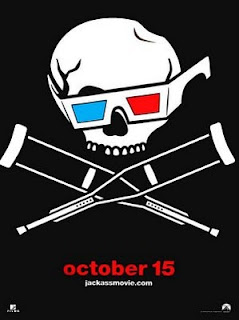 I never watched the show when it was airing, back in the day. I had no time for such antics. In fact, I wasn't really even watching TV. Back in 1999-2000, I was reading Chuck Palahniuk, Naomi Klein's No Logo, and the design-fetish magazine Adbusters. Yes, I was knee-deep in anti-consumerism and trying to be a hipster before hipsters became hip. So, no I didn't have time for those boys. But then, I saw the movie, in 2002, and thus became a fan.

The grossout gags and wince-worthy stunts were not what drew me to Jackass. It wasn't their stupid games, or their plethora of celebrity cameos. No, it was the camaraderie. Saw what you will about the Jackass boys, but they are one of the tightest friend groups I've ever seen. When you do the things they do, you instantly bond with your cohorts, and you stick by them. Even after ten years, the core group remains the same, but with an extended family of friends and like-minded idiots.

The Jackass trilogy is a very careful ode to male friendship, and it's especially true of the third movie. After every painful stunt and every gross maneuver, the boys make sure the performer is okay and tell him how awesome he is. Nobody is safe from a punch to the face, no one is safe is from falling through a trap door into a pit of snakes. They always laugh about it and they always take care of each other. Nobody ever does anything out of spite or malice. They just want to be boys and have fun.

Of course, there are those that believe that the Jackass trilogy is an ode to arrested development, grown men in their thirties trying desperately to stay in Neverland, led by the braying Peter Pan called Johnny Knoxville. Even as adults, some of them with children (as shown in the credits crawl at the end), they laugh uncontrollably at farts and shit.

But is this so terrible? Is it so bad to laugh at scatological humour? Well, no. And yes at the same time. Will the Jackass crew find this stuff so hilarious when they are 50 or 60 or older? No doubt they will, but the fear is that their fanbase will grow up without them.

This leads me into the movie itself. I found Jackass 3D to be funny. But it wasn't as funny or cringe-worthy as the last movie. There are a couple different possibilities as to why I didn't find it as good.

1. The jokes aren't funny. The ideas have run out, and the boys are doing more extreme versions of stunts I saw eight years ago. Their well has gone dry. This makes the most sense. After ten years, how many times is an airborne port-a-potty filled with shit?

2. I'm desensitized. I've seen too much grossout humour and disgusting acts. The Jackass crew has been over-exposed and I've been over saturated with toilet humour. I'm not sure if this is especially true, because there were many instances where the boys themselves puke from the grossness of the acts. The acts are more extreme, and did often provoke revulsion in me. So it's not lack of sensitivity.

3. I'm older. It's true that I'm turning 27 years old this year, and I'm interested in different things than when I was 19 and seeing the first Jackass for the first time. I've done so many things and experienced new things, that maybe, like Andy in Toy Story 3, I'm putting away childish things for the next generation. This explanation as to why I didn't laugh makes me sad, actually.

I don't want to be old. I want to be a boy forever. Maybe that's an additional reason why I love the Jackass movies so much, in spite of me not laughing as hard this time. The crew allows me to experience being a rich child without any responsibilities and doing stupid shit for the amusement of myself and my friends. That's what a lot of men want to do, and we live through Jackass.

This is a fairly personal review of a movie about men hitting each other in the sack, but for a reason. I want to engage with this art on a personal level because the whole point of art like this is to engage the viewer on a personal level. There's no academia with Jackass, no intelligentsia, no status or class warfare. This is escapism that speaks to the inner child, and I should respond as such.

I still laughed a lot with Jackass 3D. There are absolutely stunning moments of comedy, such as when they get a bunch of superglue and start removing body hair. Or when Knoxville dresses as a grandpa and has public make out sessions with a girl in her twenties. Or a hallway with tazers suspended from the ceiling that the convicts must get through. Or when they get into the pen of a ram and try to soothe it with noise from a tuba. Or when a man successfully blows a dart through a tube using only the power of his farts. There are plenty of moments to love.

I wanted to love Jackass 3D but I ended up only liking it. Jackass 2 remains the best of the bunch, I'm afraid, if only because their budget was enormous and their stunts fairly insane. There were moments where I thought the boys would die and when they didn't, I felt the same relief as surely their friends did.

So that's 1000 words about why I liked Jackass 3D. I didn't love it because the ideas aren't as fresh, and I'm getting older, but I did like it because I want to be a boy forever, just like they will be, thanks to money and endorsements. Here's to you, Jackass boys for ten years of hitting yourself in the collective crotch.
Posted by matthew.