I've been riding the same bicycle since I was in high school. It's a Giant Kronos, and it's got to be from the early nineties at least. I bought it used for 200 bucks and took care of it. I replaced the tires, replaced the brakes, replaced the chain (twice) and replaced all of the cables at least once. It's a road bike though, made for streets and racing. It's not a mountain bike. I made the decision to go with that and I don't regret it, but I do miss having a mountain bike. 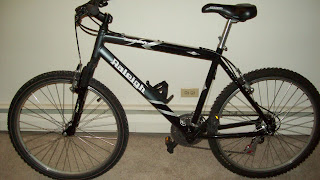 So I decided to buy a new bike. And by new, I mean a used bike. I found this bike online and I called the guy to take a look. I was kind of "meh" about the whole deal because it was a Raleigh Tomahawk, not the world's fanciest bike by far and it was 150 bucks. If I'm spending that much on a Raleigh, I may as well buy new I was thinking.

But when I stepped into his basement, I could see that the guy knew his bikes. The entire basement was full of bikes and bike parts. He had street bikes, pixie bikes, mountain bikes, winter bikes, bikes with Nos gas attached to it, tandem pixie bikes with full suspension. He assembles bike and he customized bikes, and thanks to a welding machine, he makes bikes.

He told me all the mods he had made on the Raleigh. I was sold. Obviously this low-end bike was taken care of and loved. Obviously this guy wasn't selling me a piece of crap. So I bought it. Tonight, I spent like an hour tweaking the brakes and shifters and everything else. It's ready to go. 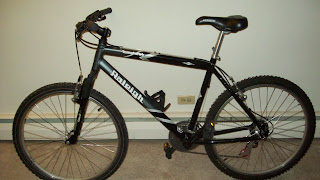 This is the first bike I've ever owned to have suspension. I currently have to set to just under rock hard. I'm not really sure how I feel about the suspension. It's going to be a constant tweak until I have it set just right. We'll see.
Posted by matthew.