A while back, I decided that Don Winslow's The Power of the Dog was one of the best books I had read in all of 2010. And yet it took me fucking forever to read another novel by him. It was almost like I was worried that it wouldn't be as good so I avoided Winslow. I decided to man up and read his 2010 novel, Savages. 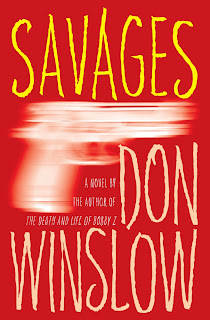 Ben and Chon grow and distribute marijuana in Southern California. Ben is the grower, the chemist, the Buddhist, the dreamer, and Chon is the muscle, the gun, the badass. O, or Ophelia, is their girlfriend. It's confusing, don't ask. When the Baja Cartel want to take over their operation, Ben and Chon refuse and say screw you. In response, the cartel kidnaps their beloved O and asks them to come up with either three years of indentured servitude or twenty million. The boys decide to do the sensible thing and rob the cartel to pay them and then rescue their O. Too bad the cartel's populated with fucking crazies who will stop at nothing to get what they want.

In my review of The Power of the Dog, I compared Winslow to modern-era Ellroy, Soderbergh's Traffic and seventies paperbacks with sex gods blowing everybody's minds. To reiterate, this wasn't a complaint, but rather an observation. Savages is a different kind of novel than the first one I read. Savages is a character study first, and then a kidnapping story second. Thirdly, it's a continuation of the themes (and some plot points) picked up by The Power of the Dog.

And it works completely because of Winslow's deft narration and investment in his cast. First, let's talk about Winslow's prose. It's an acquired taste for sure. My mother would hate it. It's snappy and rings like a bell, with short sharp sentences and mid-sentence paragraph breaks for increased emphasis. The narrator speaks straight to the audience and uses a very conversational tone and language, as if the narrator is telling you this over a few beers in your local bar. There's asides and tangents and jokes and puns and riffing on the current political climate in the US. Make no mistake, this is a novel set in 2010 and is a product of its time.

There's references to Obama, to Glenn Beck, to Skype, to Facebook, to all manner of modern day conveniences, but also to the political problems facing the US right now. Soldiers, returning home, without any future, are being hired by drug lords for military operations. The recession is in full swing and those with money are holding onto it for dear life. The racism and the class warfare between the rich Mexicans and all the rest of the Mexican community back home and in Cali. Cults, life coaches, shopping, Rodeo Drive, cyber-terrorism, Darfur, rape, political corruption. For a book that's really only about a few character, it's a big book.

Instead of using the same giant canvas that Winslow used in The Power of the Dog, this book is more interested in what happens when powerful people overstep their boundaries and fuck with the wrong dudes. Ben and Chon go on a crusade against the Baja Cartel in order to save the one person in the world that they would do anything for. Of course, there is a price to be paid for this: the loss of innocence and the soul.

It's heartbreaking, because you have to know how it ends. You have to know because when three people love each other as much as they do, there's no way it can end with happy smiles and no blood. It's a point in Winslow's favour that it's never cloying or irritating. It's simply organic and it broke my heart.

Savages' greatest strength, second only to its relentless pace, is Winslow's investment in character. He builds each character and let them be people, with enough backstory for you to picture the person, and enough to make the emotions take their toll, but he never gets bogged down in explaining who the person is, their life, their love, their thoughts. Only enough to get the job done, which sort of explains Winslow's style.

I said that Savages is a big novel, but it's lean and mean. Yes, Winslow pokes at all sort of sleeping bears like Obama and that super annoying Alaskan, but it's always in the context of a bit of background or for a laugh. The rest of the novel is as lean as his prose. It's just hums along at a fantastic clip and it rarely takes a sunny detour down a path not needed.

Savages is a great summer read, full of action, hot girls, drugs, heists, guns, and a load of great characters. I didn't love this one as much as the last Winslow, but that was a pretty hard act to follow. I loved Savages and I will read another book by him for sure.
Posted by matthew.