It's really fascinating to read 19th century novels and wonder how the authors got away with saying the things they said. Like in Madame Bovary. Or in L'Assommoir (which I'm halfway done so far). Or in Bel-Ami by Guy de Maupassant, who was apparently a protégé of Flaubert. So let's dive into Bel-Ami, and continue our summer of classics.

Georges Duroy has two things going for him: he's devastatingly handsome, and ruthlessly ambitious. But the problem is, he knows nobody in the city of Paris and he's working a dead-end job, living in a slum, and he can hardly afford both prostitutes and food. It's not until he meets an old friend from the army, Charles Forestier, who hooks him up with a job as a gopher at La vie francaise, a low end newspaper. Through guile, perseverance and his cockmanship, Georges moves up the ranks of the paper, and of the social ladder.

Let's be honest here. This is a sexy book. There's lot of sex. Pretty much every chapter has Georges trying to, and succeeding at getting laid. It's not hard to conclude that Georges Duroy is - yes - a douchebag. He's ridiculous. Here's Georges Duroy in 2011, just posing with a bunch of his bros. 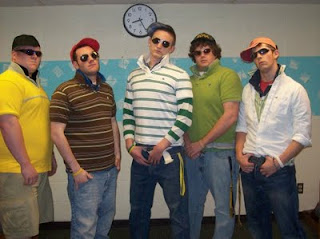 Yup. That's Georges on the far right. Or in the middle. Or second from the left. I can't tell. Anyway, Georges is a huge douchebag. Now the important question is whether or not we should be rooting for him. He's the protagonist after all. Don't we read books to root for the good guy and see him succeed? Ah, I'm so glad you asked. If I hadn't known Maupassant learned at the feet of Flaubert, I would have accused him of biting the same style and ripping off the same tricks.

Georges' rise to power through seduction and manipulation is a story as cynical as Flaubert's handling of Emma Bovary's irritating, self-centered and vain flights of fancy for a more interesting life. Bel-Ami is almost gritty in his portrayal of how corrupt this fucking douche is. How am I even supposed to enjoy this book if Georges is such an unlikable fellow? Well, it's like I mentioned up above: it's all about the technique.

Madame Bovary and Bel-Ami are almost archetypal stories. Both characters are desperate to trade for another life. Emma sleeps with interesting people and then commits suicide because she's over dramatic and an idiot. Georges sleeps with interesting people and goes up the social ladder because he's an idiot and over dramatic. But in both cases, in both novels, the style and technique keeps us invested in the story.

Okay, you're saying, what's so fucking good about this goddamn style? Alright, calm down. I'll tell you, but only about Bel-Ami, 'cause I've already spent too many words talking about Bovary in a review about a Maupassant novel.

Maupassant performs a very subtle and amazing trick in this book, all through technique and style: at no point in the entire novel does Georges think he's doing something wrong. And it's not like people don't tell him that he's a dick and a douche. His mistresses never fail to tell him the truth about his character. "Oh," Georges says to himself, "they're just ladies being ladies." Alright, Georges, you won't listen to mistresses... but will you listen to the author himself? In a very clever and - again - subtle trick, Maupassant even has the narrative find ways to point out to Georges the awful truth, but Georges never takes the fucking hint.

Of course, if he did, it'd be a pretty awful book. The reader would wonder why Georges realizes he's a terrible person but keep making the same mistakes. Not that they're mistakes, per se. 'Cause really, Georges is amazingly successful. When I say that he sleeps his way to the top, I'm being somewhat facetious. Georges is quite a skillful manipulator, and manages to push some people around enough to get himself to the head of the food chain. He even manipulates his boss into letting him marry the boss's virginal and beautiful teenage daughter. But the punchline? Georges' mistress is the boss's wife! Yes, this is a despicable inhuman unfeeling guy. But shit is this guy entertaining.

There's a super entertaining episode in the novel around the midpoint, where Georges has found his new career, and he's working for the paper, and he just got promoted to running the gossip column. It's no spoiler to say that Georges gets into hot water by faking items and twisting facts into outright fiction. A rival newsman calls Georges out through the paper, in a public and embarrassing way. By the standards of the day, Georges has no choice but to get into a duel with the other guy, who he's never met, doesn't know what he looks like, and Georges has never been in a duel before.

What makes the episode so masterful is how Maupassant gets into the head of his character, shows us how damn scared he is, how sweaty his palms are, but he gets into the duel anyway because that's what you have to do. In the day before the duel, Georges is supposed to practice shooting in the basement of this house, but instead he sits around moping and wondering how the world is going to react if he dies. It's a fucking brilliant scene. It's funny and painfully embarrassing for Georges and therefore entertaining for us. 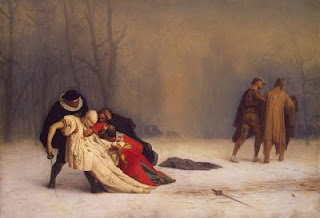 Maupassant didn't seem to have a very high opinion of the world he lived in. It feels like Maupassant thought everybody was a crook and a cheat and a hypocrite. That anger seems to have given birth to a work of fiction that just excoriates Parisian society. He just eviscerates the whole thing. No character is safe from the poison of his pen.

I wish I could have lived in the time that this novel was published. Not because I want to live a "simpler life" like some idiotic hipster, but because I want to see how high society reacted to this. I wonder if women and men were just outright offended and scandalized by Maupassant clearly making fun of them. I can imagine the women sitting around a hearth in a beautiful salon, some of them playing cards on a small card table, one woman defiantly smoking a cigarette, and the subject of the titillating work comes up, and the women, one by one, and then together, exclaim how awful that Monsieur de Maupassant is, and how the "de" was probably just added on for "airs". I would love to have been a fly on the wall for that conversation and thousands like it.

This book must have caused a stir back then. But does it cause a stir now? Is the book any good? Does it hold up? Well, you can't really tell by my word count, as I seem to spend the same amount of time demolishing something as I do praising it to high heaven. Yes, Bel-Ami is a fucking great book. It's funny, it's shocking (still to this day) and it's fairly cynical. I found to be rather modern in its sensibilities and how close Maupassant sticks to his protagonist. There's an academic paper to be written here, about Maupassant's narrative voice and how neutral it stays, although I'm sure such a paper does exist.

Of course it's not perfect. It's far too episodic and a lot of the episodes are fairly similar in structure and content, so the third quarter of the book tends to feel a little same-y. It picks up with the last part, when Georges' awful awful awful plan comes to fruition. No, I'm not going to spoil a 125 year old novel, but suffice it to say that the ending is flawless and effortless, like Maupassant had it planned from the beginning. It's gorgeous.

Yeah, it's hard to fault this novel for being episodic. I'm not going to check my sources on this, but I'm going to say that Bel-Ami was serialized like most books of the time, so there's a tendency to forgive the episodic nature of the beast. However, I must add that when I say episodic, I don't mean there's an irritating cliffhanger at every chapter like some other 19th century novelists (I'm looking at you, Dickens) 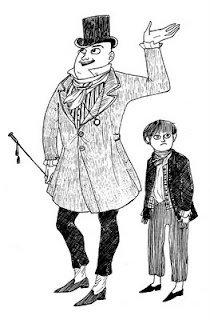 (Here's a great drawing by Kate Beaton of some famous Dickens characters. Only tangentially related to this review, and not related to the novel in question. Just thought I'd add some love for Beaton.)

So anyways, Bel-Ami is a great book. But here's the most important question of all - does it match, surpass or come close to the majesty and perfection that is Flaubert's Madame Bovary? Well... it comes close. Bovary just has all the right jokes, all the right images, all the right techniques, and Maupassant is good, but he ain't no Flaubert. It's a shame to compare them, but I'm doing it anyway. It's my goddamn blog.

You should read Bel-Ami. It's entertaining and funny. It's got a lot of sex and heaving bosoms, and Maupassant is never poking you too hard in the ribs so you keep up with his funny jokes. And there's literary merit to it, as well, beyond just the author's skill. There's some haunting imagery, and don't forget to take note of Georges' physical description, and the description of the acrobat later in the book.... Like I say, there's literary merit to this. It's a good book. Thanks for reading my long bizarre review of Bel-Ami.
Posted by matthew.

Damn straight! Love this piece, will be quoting you in book group.