Russian literature. Amirite? It's dense, it's cold, it's obsessed with the relationship between people and God - people and classes - people and grand themes like crime and/or punishment. Every time I pick up a big fat Russian novel (there are no other kinds), this is how I feel. 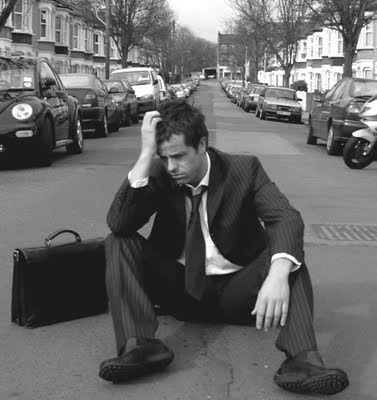 Except without the terrible shoes. And the weird briefcase. But anyway, this is how I feel. I've tried Anna Karenina and got maybe 150 pages into - how long is it? - one million pages. I got maybe 50 pages into War and Peace. I almost finished Crime and Punishment, but then I lost the paperback I was reading and I never got the willpower to try and figure out where I was. I have Vasily Grossman's mammoth Life and Fate sitting on my nightstand right now, jeering at me, laughing at me, making me feel inferior. I don't know why. I've read Pynchon. I've read Joyce. I've read Gaddis. I've read David Foster Wallace. What's wrong with me?

This summer, among a thousand other projects I want to do, I thought I'd read some more difficult literature than I normally read. In 2011, I've read 24 books, and probably only four of them were "classic" or "difficult" works. I've been slumming it. So that's why Life and Fate sits there taunting me. It's also why I have A Guy de Maupassant book beside it, two Emile Zolas and one Stendhal. Those are all French though. I also had Ivan Turgenev's most famous novel, Fathers and Sons, which I gave a read yesterday, because it was a nice relaxing day for me. 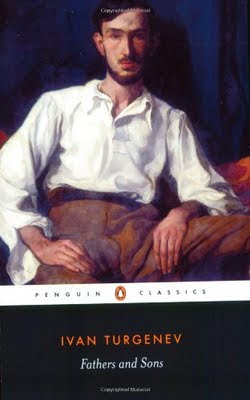 Fathers and Sons is a character study of one father, Nikolai Petrovich Kirsanov, his son, Arkady Nikolaevich Kirsanov, and another father and another son, Vasily Ivanovich Bazarov and Yevgeny Vasil'evich Bazarov. Both Eugene (as it's translated in my copy) and Arkady have just come from university, with Eugene studying medicine (like his father) and Arkday studying whatever. When they arrive at their old country homes, their fathers are shocked to see the boys have decided to be Nihilists, in the sense that they respect nor acknowledge any authority.

The fathers are liberal, forward-looking men themselves, creating a new form of business with the serfs and peasants in an attempt to bring Russia into the 19th century. However, this isn't radical enough for the sons.

While Eugene sticks to his beliefs, even in the face of falling in love with a beautiful widow, Arkady struggles with his loyalty to Eugene when he falls in love with the sister of the widow. Meanwhile, Nikolai's brother, Arkady's uncle, Pavel Petrovich Kirsanov, aristocratic bourgeois, cannot stop arguing with Eugene, and the arguments escalate and escalate.

I'll be totally honest with you. There are only two reasons why I grabbed this from the library. One, it's considered a classic of Russian lit, and often considered the first modern Russian novel. Secondly, it's only 200 pages long. I would have avoided this if it had been any longer. Not only does the subject matter not interest me, it's predictably Russian in its obsession with class and the internal life of the cast.

Nonetheless, I'm glad I read this. At first, I was a little put off by the strange wandering point of view. For the first third of the novel, Turgenev follows any character at all, just going off in all these different directions, to the point where you are not sure who the main character is. No matter how tangential it seems, Turgenev follows it and pins it down, and watches it scurry on the pin. There's a (thankfully) brief episode where Eugene, Arkady, and one of their irritating friends goes to visit a modern Russian woman if only because she'll give them free booze. (It's champagne in my translation, but I'm suspicious of this. As much as the Russian aristocracy loved to pretend to be French, I doubt that champagne (real champagne) was so easy to come by in rural Russia.) It's an annoying scene because of the weird nonsensical political discussions they have. Eugene and the friend even go out of their way to denigrate women in front of their female host. I get what Turgenev is doing, I just didn't like it.

However, by the halfway point of the novel, Turgenev seems to have focus. He's slid the pieces around, and back, to try and find something he likes, indecisive for 90 pages, but then he's got it, and he lets loose. When Arkady and Eugene end up staying in the country manor of the widow named Anna, the true part of the novel begins. While Eugene is brash, cold, unfeeling, arrogant and misogynist, Turgenev shows that no true Nihilist is immune to the powers of love.

For a book of only 200 pages, there's a massive psychological depth to Eugene and Arkady. It's almost hard to describe how perfectly drawn these two were without needing another 1500 words to explain it. Eugene is a character that you can see and smell and sense in the room with you. He's an arrogant little prick, but Turgenev never mocks him. He never mocks any of his characters. Even the foolish ones. Turgenev has oodles of sympathy for his cast, he cares about them, and wants them to be themselves. He's not like Zola, putting detailed people in scientific experiments to see how'd they react - nope, nuh-uh. Turgenev already knows how they're going to react. That's the beauty of this novel.

Arkady and Eugene forsake their fathers' ideology and their past for a new radical thinking of modern science and modern philosophy. They are the new Russians. But Turgenev isn't trying to say that kids are getting worse. No, not at all. Because Turgenev puts them through a situation that makes them both re-evaluate their Nihilism, re-evaluate their priorities and then they - frankly - grow the fuck up.

So it's all the more satisfying when Arkady and Katya, the widow's sister, fall in love and get married and be happy together. Arkady deserves it. He's a good dude who just got up in the wrong crowd. But he was never disrespectful to his family. He was just disrespectful to their way of life, a huge distinction. When he receives his "reward" of a beautiful love of a beautiful woman, it's emotionally satisfying. This, my friends, is a sign of two things: a complete emotional and story arc for a character, and secondly, the sign of a good writer.

I've mentioned time and time again on this blog a few pet themes in my reviews. One is immersion, one is social responsibility, and the other is a writer's ability to put you into the characters, to make you care. We're a cynical bunch these days. Most American art is about sneering at those who have fallen. It's not quite the same in other parts of the world, and it's not quite the same for 19th century literature. When somebody falls, you're supposed to feel bad, not good. And when somebody succeeds, in spite of background or plot contrivance, you're supposed to feel great, not the instinct to roll your eyes. Turgenev is a product of his time, surely. He makes you invest in his cast, and then rewards you and the cast for going through it. Reading is supposed to be entertainment, not a punishment, or at least that's how 19th century literature looked at it. If they can teach you a few lessons while they're at it, then awesome, but paramount is entertainment. Fathers and Sons succeeds where other Russian books I've tried to read have failed.

Fathers and Sons is still dense, just like Russian lit should be, but it's psychologically dense, rather than impenetrable. It's entertaining because Turgenev is a solid craftsman who invests in his cast and his own beliefs: the future of Russia is not in radicalism, but in sticking together and getting through it as a family. Not only does this appeal to me as a political thinker, but it appeals to me emotionally. So it's a win win for all of us.

But is it perfect? Oh, I'm glad you asked. No, unfortunately, it's not perfect. I sort of touched on this up above. The first third is confused about what it wants to go and where it wants to go. It's a slow start, which can be fatal for a shorter work. I get the feeling that Turgenev just had these characters in his head, and when he started writing, he wasn't quite sure where to put them or what to do with them. The other problem is the ending. I don't want to spoil anything more than I've already spoiled, but the ending smacks of stereotypical 19th century fiction. I thought that by 1862, when this was published, the ending in this book was already a cliché (considering that already, in 1856, Madame Bovary was making fun of the stereotypical ending). Anyways, this isn't a fatal problem. This is just typical problems of the literature of the era. Hard to fault people for being of their time, isn't it?

Other than this Fathers and Sons is a pretty damn good read. It's got great real characters, a couple of whom will stay with me for a long time, longer than the cast of The Grapes of Wrath, that's for sure. It also manages to make its complex points in under 200 pages, something I admire greatly. Too many 19th century novels went with quantity over quality and circled over and over again, grinding the themes into the reader over and over again. Not Fathers and Sons and not Turgenev. This is a good way to start a summer of classic non-English literature.
Posted by matthew.