The Grapes of Wrath

I never had to read Steinbeck in high school. We read 1984 and Animal Farm. Which sucks, because when I got to university, it was assumed that I was already familiar with Steinbeck, so there was no point in reading him. Now, it's 2011, and I'm 26 years old and I just read my first Steinbeck novel.

Here's a graphic I made outlining my thoughts on The Grapes of Wrath. 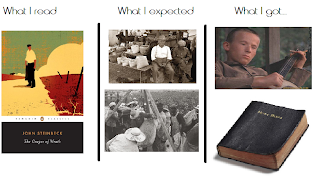 You'll notice that the Bible features in the column "What I Got". I had no frigging idea that The Grapes of Wrath had so much religion and religious symbolism in the book. Even the final paragraph of the book is a reference to La Pieta. I'm not a religious person in the slightest, so whenever I read something so spiritual, I don't really fall head over heels for it.

If you don't know, this book is about the plight of the family Joad, farmers from Oklahoma, driven from their farm and seeking work, any work, in the alleged promised land of California. Led by the ex-convict son Tom, the family sets out on a long and perilous journey across the States, only to find prejudice, violence, and less work than they thought in California.

The overall reaction I had to this book, which was surely intended, was that it was wearying. I was exhausted every time I put this book down. Steinbeck never relents in his onslaught of details of how terrible these people have it. Page after page after page of the Joads trying to maintain a strong constitution in the face of imminent starvation and destitution, and it never ends. Each camp they arrive at, each farm they try to work at, it just never gets any better. The wages they're being paid are halved almost every day to the point where even one man couldn't afford to eat, let alone a whole family.

This book is a fraught emotional journey, worrying and wearying. I don't think I'll ever read this again, 'cause it was just too damn depressing. That isn't to say I didn't enjoy it, but I can't honestly say I loved it. Part of the problem is the folksiness of everything. To paraphrase one of my friends, an avid Steinbeck fan, you can practically hear the banjos every time the family gets in the car. Everything is dripping with that homespun good ol' country vibe, and that saccharine sentimentality and sincerity. Everything is just so goddamn sincere.

There are only three kinds of characters in this book: the Joads, who are perfect and Madonna-like, the racist prejudiced violent rich people, and Okies who are just trying to survive and are given no development beyond that they are poor. When I say the Joads are Madonna-like, I don't mean "Life a Virgin" or "Express Yourself". I mean Madonna like this: 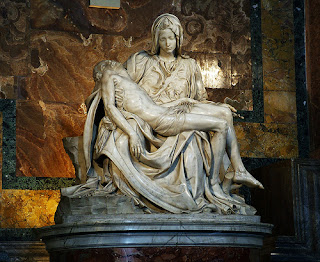 They're just so perfect and saintly. It's just so irritating. Tom Joad, ostensibly the main character, goes through an emotional arc whereby the end, he's become a Christ-like figure, and he realizes the best thing to do is to put his soul out there, and help his fellow man. Yes, this is a man who has killed two people by the end of the book, but he finds redemption in social justice, and all is forgiven. The cast bend over backwards to forgive Tom for the crime of fucking murder. Everybody says how the victims deserved it, and Tom assures us, again and again, that if given the opportunity to go back, he'd still commit murder. Am I the only one who finds it difficult to compare Christ and a murderer? Am I the only one who thinks this is bizarre?

I took this university course in my second year that was called Canonical Conundrums. Pretentious course title aside, it was about the difficulty of judging what should be included in the list of undisputed classics. In the first half of the course, we looked at obvious books like The Odyssey and Frankenstein and god knows what else, cause I didn't pay attention in the first half. But in the second, we looked at more... questionable works, such as The Rape of the Lock by Alexander Pope, The Awakening by Kate Chopin and even the first Harry Potter book. These are works that are good, even great (except Harry Potter), but when you put them up against things like the Scottish play, or Great Expectations or Middlemarch, then you have problems.

I'm going to say something inflammatory and controversial. I don't think The Grapes of Wrath should be considered an undisputed classic novel. I think it's a good book, and I think what Steinbeck was trying to accomplish is fantastic and he mostly achieves it. But I just don't think this novel is as good as they make it out to be. The Grapes of Wrath is completely successful in portraying desperation and ceaseless struggle. However, it's unsuccessful in portraying a family of real farmers who are desperate and are ceaselessly struggling.

The greatest crime committed by this book is not developing its cast. The matriarch of the family doesn't even have a name. The best the characters get, other than Rose of Sharon and Tom, is one character trait repeated ad infinitum and constant reminders from the cast themselves. Al, the sixteen year old, just loves cars and girls. Ruthie, the twelve year old girl, is rambunctious and always getting into mischief. Uncle John carries the burden of guilt and only ever wants to drink. And Pa Joad is constantly undermined by his saintly and perfect wife, Ma Joad.

At the end of the book, the family arrives at this camp, and they meet the Wainwrights. I guess in a matter of days, Al and Aggie, the daughter, end of deciding to get married. Yay. Good for them. Do we know what Aggie looks like? Does she have any dialogue? Does she even have a character trait other than being "growed up"? Nope. Not at all. Why does Al like this girl? Why does he keep by her side, forsaking his family for her? Well, we'll never know because Steinbeck was too busy in the last couple chapters co-opting images from the Bible to elevate the Joads from common farmers to parables.

Tom was interesting to me because of his reaction to everything. He was rarely shaken, and in times of serious trouble, he was described often as "chuckling", like he's laughing in the face of danger. He seemed the most real out of any of the cast because he would give into anger, when cops harassed him, and he would give into pleasures of the flesh. He was a real person being pushed around. It's only in the end when Steinbeck hoists him up to metaphorical heaven to become the mouth of Christ for the farmers that Tom loses his realistic edge.

I can totally see Henry Fonda as Tom, with those big ol sad eyes he has. Henry Fonda has the epitome of the open face, where all his emotions are right there to be read. I can see this. Tom never hid his true self from the world. He puts it out there for all to see. That's what makes him so interesting.

Up above, I mentioned that Rose of Sharon is the only other character to be interesting, and go through an emotional arc. But I'm fudging a little here. For four fifths of this book, Rose is super annoying, always crying about this and bothering people about that and getting all worked up. It's because she's a child, but the burden of motherhood and adulthood has been thrust upon her, and she is being forced to grow up. Only at the end, when she has lost "everything" does she open herself up to the world and make the sacrifice needed. It's actually a pretty cool transformation and it means a lot for the text. If Tom decides to open himself up to the world in the name of social justice, which is all figurative, by the way, not literal, then Rose is doing the same thing, but in the most iconic motherly and feminine way of all: La Pieta, as seen above. I don't want to spoil it, but she performs a task without being told to, in a very beautiful and epic moment. Like I say, it's pretty cool and quite satisfying in terms of reading the text and in terms of catharsis.

I wanted to mention the chapters between the main plot. The Grapes of Wrath has an interesting structure in that every other chapter takes a macrocosmic view of the migrant workers, and uses a rather Modernist style of stream of consciousness, but not in the individual, rather in the collective. It's kind of interesting at first, and performs a sort of chorus like job of painting the whole situation. At first, they're engaging and well-written, and you can see what Steinbeck's trying to do. But when you reach the two thirds mark of the book, it tends to just be more of the same, reiterating themes and images that we just saw in the previous chapter and the previous interlude. We get it, Steinbeck, the land is beautiful, but I was just tired of them by the end. They were running over the same ground again and again: the workers are getting cheated, the workers are suffering with their heads held high, and then at the end, they take to stealing and fulfilling the prophecy predicted by the Californians.

But like I say, I liked the book, but I didn't love it. It's eminently readable, engaging, and sometimes shocking, and always harrowing. Just for the audience reaction alone, this would be a monumental achievement. If Steinbeck had put more care into his cast, or minimized the cast, the novel would have been more emotionally engaging rather than just simply effective in portraying destitution. While I don't think The Grapes of Wrath is the greatest novel I've ever read, I would never in a million years proclaim it to be bad. It's just, it's hard to like this book when there's so many others that are better. This book has its flaws and people are doing themselves a disservice by not acknowledging them.

And so, another book on Time Magazine's 100 Best Novels is completed. I'm still at only 40%.
Posted by matthew.