Man, I am on a roll with comics, huh? So here we go, taking a peek at Grant Morrison and Sean Murphy's Joe the Barbarian. But first, let's get some put this blogger and Morrison together in context.

When I came back to comics after years, Animal Man was one of the reasons why I came back. I had been reading Scott Tipton's Comics 101 on moviepoopshoot.com way back in the day, and he did a series of posts on Morrison's run on Animal Man. At the very same time, I had just gotten into metafiction so it was, like, a perfect fit. I went out and got the three trades and read 'em. I said to myself, I need to read more Morrison. So let's fast forward eight years, and in that montage of those years, the audience can see me read The Invisibles and New X-Men and Fantastic Four 1234 and The Filth. We screech to a halt in 2009 when I read Final Crisis and pretty much stop reading comics after that. It's now 2011 and the few major works I've read in comics have been pretty much documented by this blog. Overall, I am a huge Morrison fan. I love his bizarre anything goes style. I like his absolutely counter-intuitive approach to dialogue. I love his insanity. 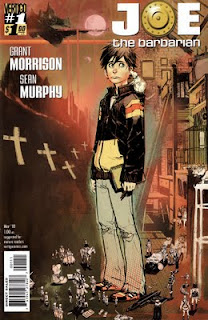 This work, however, is not generic Morrison work. While Morrison toils away at his giant Batman epic that has gone on far too long for my attention span, he also wrote this more... subdued work of a boy with Diabetes who goes into a hypoglycemic shock and has hallucinations of the toys in his bedroom.

While the miniseries is 8 issues long, the aforementioned synopsis really covers the entire thing. This isn't a very deep or complex story. It's a fantasy work, but grounded in the real world, an especially real world with political overtones and subtle references to the economic recession that plagues the Western world.

We definitely need to talk about the art before getting into the story. Sean Murphy's art in this miniseries is - in a word - epic. Murphy is adept and comfortable at drawing the biggest action scenes, double page spreads of Godzilla-sized dogs taking on armies, whole fields populated with anthropomorphized rats and toys. But he's also able to draw the more intimate personal scenes, in the real world and in the fantasy world. He has a way with facial expressions and with selling it to the reader. It's really important to connect Morrison with an artist who can handle the crazy shit that he comes up with. You put Morrison with somebody not very good at staging or even communicating basic choreography to the reader, and you've got serious problems. Like the last two issues of The Return of Bruce Wayne are almost unreadable thanks to the terrible art. But anyways, I'm getting off topic.

There's got to be a lot of people out there who dismiss Morrison's more intimate work in favour of his bigger and more ridiculous stuff like Final Crisis or The Invisibles. They say to themselves, "oh the god of all comics is just doing something minor - it's not worth reading - now pass me the Mountain Dew and that stack of Justice League comics." Who am I kidding, these neckbeards don't have anybody to pass them anything. They're forever alone.

But I think this is an intriguing work. Did I like it? No, I didn't. It could have been halved and still remained effective. Eight issues was far too long. But that doesn't mean I'm going to dismiss the work entirely. I mentioned in another blog post about comics that minor works or missteps by established artists are often more interesting because of the way the experienced artist goes ahead with their misstep. The same still applies with Joe the Barbarian. The flaws almost say something meaningful in of themselves. Like, Morrison really needed 8 issues to tell his story of a diabetic boy who goes from the attic to the kitchen to get some sugar to the front door. That's all that happens.

Comics are all about time. Yes. Don't argue with me. The movement of the eye from one panel to the next is supposed to show the passage of time between panels. Like Scorsese says about cuts in a film, how the brain fills in the gaps between the cuts. It's the same with comics. You can spend an infinite amount of panels showing a boy take a step or you can show two panels depicting the entirety of the life of the planet Earth. It's all about the passage of time. So it's very strange that Morrison uses 8 entire issues to show a boy walk down a fucking flight of stairs.

He could have done this with only four panels, and it would have been uninteresting and without a dramatic arc. In stretching the time, pulling the ends apart as far as possible, Morrison creates a story, a rising action, falling action, motive, blah blah basic story skills. It's almost like he challenged himself to tell the most boring story ever and stretch it out until it's good. And that's why this story is interesting to me.

Like I said above, I didn't really like it. Fantasy's just not my bag. Another one of my blog's pet themes is genre, and how I'll defend genre fiction until the end of time. Except for fantasy. Not because I have anything against but because I know next to nothing about it. I remember reading The Lord of the Rings for the first (and only) time and every time I turned the page, I was like, "why the fuck are you idiots singing? Quit smoking the magic herb and get a goddamn move on! And where's Liv Tyler?" So yeah, I don't like fantasy. It's just not my bag. (Obviously I know that not all fantasy follows the paradigm set by LOTR. I know there's a vocal group who wish to destroy the paradigm and start anew - I suppose Joe the Barbarian sort of fits into that revisionist mold - a ha - I knew I'd find a way to fit this tangent into the review) Anyways, there's nothing inherently wrong with fantasy, I just don't like it. When it comes to something so fantastical and whatnot, I prefer the fiction to have lasers and spaceships rather than pseudo-medieval societies and fucking elves. I just find that fantasy is written by neckbeards for neckbeards. But that's me. 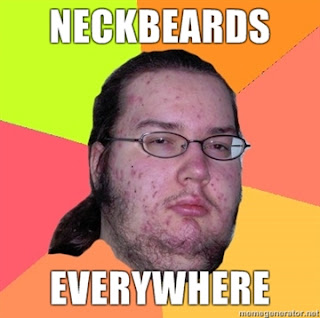 What's my goddamn problem with fantasy then, you're asking yourself, if you're reading this blog, which you probably aren't. Well, it's like I said before, they tend to follow a very familiar pattern and this pattern doesn't interest me. Now, the same complaint can be said of sci-fi. Hey, I'm not going to defend homogeneity in genre fiction. Sci-fi is as guilty as anything else. You'll notice that my sci-fi reading is limited to classics and the odd piece here and there. It's the sameness that permeates everything that causes me to go bleurgh at the sight of fantasy. Plus the fact that everything is overwritten, overpraised and overlong. There's very few standalone works of fantasy that are considered classic. There's always a sequel. I've defended sequels before, but you'll notice that I don't defend 8 sequels or the James Bond series. Two sequels? Okay... Four sequels? Meh not so much. Fantasy is guilty of being overlong. All the time. Even Joe the Barbarian.

So there's the length, that's one problem, but what else is there? Well, if you're a regular reader of Morrison, you already know of his sometimes dense plots and his neverending faith in the reader, that the audience will keep up. There's no hand-holding in Morrison's world - you either keep up or you fall back. Nothing wrong with that. In fact, I salute it. Good for you.

There's some good points to be had in this series other than the fantastic art and Morrison's lack of hand-holding. The parts of the comic set in the real world are just dripping with pain and sadness and it's spectacular. All the scenes with Joe trying to be normal, and all the scenes with his mom are just great. Well done.

Yeah, this is a weird review of this comic, isn't it? Okay, I'm going to wrap it up. It's a minor work by a great writing with some great art by a great artist. If you like fantasy, you're golden. If you don't like fantasy, well then, it's still okay. End of fucking review.
Posted by matthew.