(Warning: this is a really long review of a comic book. Both the review and the comic deal with extremely adult situations. Plus the review is like 1600 words long, I mean god, get an editor already)

Here's a hypothetical situation for you. Say you're this writer of comics, and you're one of the most important and highly respected writers ever - of comics that is. And let's say you wrote a few "graphic novels" or whatever that are so popular and so influential that one of them is often thrown in with the greatest works of literature in the 20th century. Now, fast forward, and you go crazy, start saying shit about the companies you worked for, and then eventually, the only place you want your stuff to be published is through independent publishers. Since you're so goddamn important and so influential, you gotta feel the crushing weight of expectations anytime you put pen to paper, right? Yeah, well you're Alan Moore, and you wrote Neonomicon, a 4 issue mini-series for Avatar drawn by Avatar's only illustrator, Jacen Burrows.

It's got to suck being Alan Moore sometimes, what with the celebrity, and the expectations and the history and the beard. No, wait. I change my mind. It's pretty easy to be Alan Moore. He's a genius, he's a great writer, he's funny, he's tall and apparently pretty good looking back in the day. So I shouldn't feel sorry for him when he writes something that is - well - not very good. Every writer is allowed a stinker.

But sometimes, that stinker is extremely interesting. Sometimes when a master of his field produces a turd, it's more fascinating than the regular turds put out by the usual turd-factories. Take for example, one of Scorsese's missteps, like After Hours or New York, New York. Both are very specific styles that Scorsese wanted to try, and while they don't quite work, they're still films worth watching because of Scorsese being out of his comfort range, but bringing his specific style and language nonetheless.

With Moore's Neonomicon, it's definitely a misstep. Let me break down the plot for you. These two FBI agents, a black guy with a wife, and a blonde woman in treatment for sex addiction, are investigating a serial killer copycat, one who has taken his inspiration from a guy who only speaks in a weird language that the blonde agent seems to recognize. Then, they start to investigate the weird sex angle of it, and they find themselves going undercover as a couple who want to engage in weird sex acts inspired by some writer's horror stories. It gets weirder from there.

Part of the problem is the structure of the story. And this is a big problem for somebody like Alan Moore, whose structure is famous for being like clockwork. In the first issue of Neonomicon, we're introduced to the agents, the mystery (who's this serial killer) and a very loose connection to H. P. Lovecraft. Then the second issue has some sort of shootout in a club, unrelated to the copycat killer, and now they're tracking down leads in a weird sex-ring operation. In the third and fourth issue, the blonde agent is repeatedly raped over and over again by some fat white people, and then by a horrific sea creature. You see the structural weaknesses, here?

We're set up for a mystery, but then the story follows a tangential path to things fucking other things. It's all very psychosexual, and Moore is making a very obvious connection between Lovecraft's weird nightmares and the sexual stuff Lovecraft was so creeped out by. As I say, it's painfully obvious and any 15 year old kid who just started reading Lovecraft is bound to make a connection between all the tentacles and slimy things with genitals and sex.

Honestly? None of the above. Anybody who has seen five minutes of anime knows that this kind of stuff is pretty run of the mill. So is Moore making a point about Lovecraft's creatures then? Now, this is interesting. Cthulu has become so ubiquitous as to remove all fear and horror from the concept. There's plush Cthulu dolls, for Christ's sake. One of Moore's characters even makes this point clear. But here's where Moore missteps and fatally so. Instead of writing a Lovecraft story where shit gets fucked up and gets fucked up fast, Moore decides to keep the horror local and take Lovecraft's implications of sex with sea creatures to its logical conclusion: rape by tentacle. This isn't shocking or disturbing. In fact, it's kind of sweet when the blonde agent jerks off the creature cause she's sore from all the fucking. 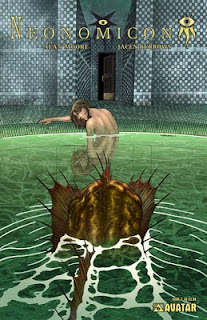 If the best part of Lovecraft is the depth of the possibility, then Moore has missed the point. Lovecraft's stories are so good not because of his odious prose, but because of what he implies. Lovecraft makes mention of things so deep, dark and terrible as to turn you insane just from seeing it, or even hearing the words. There's a whole race of evil disgusting space creatures out there with tentacles waiting to do - whatever it is they do, and Lovecraft only scrapes the surface. Moore misses out on this entirely by doing exactly what it is we think Lovecraft's imagination will do: rape by tentacle.

You see how Moore has fallen into the trap of modern horror? Instead of showing, he tells. And by showing, I mean having the reader wonder how deep the rabbit hole goes. Instead, Moore has an issue of blonde women being raped by tentacles.

Or, is Neonomicon some clever commentary on where Lovecraft-inspired fiction has gone? Is Moore making a statement so clever and so subtle as to escape my critical gaze? It's possible. But honestly, if the joke has to be explained, then it isn't funny. If Moore thinks he's making an expert judgement on how far off the deepend horror has gone, he's done so in a blind and foolish manner.

It's hard to say if I hated this comic. On one hand, it's juvenile and sticky with adolescent obsession with sex. On the other hand, it's kind of fucked up and I tend to be very forgiving of things Lovecraft related, and frankly, Moore related.

Despite overall problems with the comic, there are a few bright spots that make up for it. One of them is the aforementioned bond that grows between the raped woman and the sea-creature. Another is a particular moment in the second issue that's a fairly stock scare, but manages to be very effective in its execution. Even though I spoiled most of the plot, I'm going to refrain from spoiling this specific moment.

As well, you almost have to give Moore a little bit of credit for not showing Cthulu or any of the Old Ones. Lovecraft inspired stuff nowadays tends to shoot its wad immediately with gratuitous money shots of tentacled monsters. Moore keeps the Old Ones reined in, something I almost didn't expect.

No, I didn't hate this comic, but I certainly didn't love it. I only read it because of Moore's name, and I kind of like Burrow's style. I tend to avoid Lovecraft inspired work because I've found to be, like I say, sticky with adolescent obsessions with sex. Like the only real fear that we have left is violation by creatures unknown. I could continue with this thread and start my usual "sex isn't bad and the more we talk about it the less it's taboo" but this review is already over long, considering it's only a 4 issue miniseries.

This being said, it's an interesting failure because it's an Alan Moore comic. I wish the man would write more, so that the weight of his infrequent contributions to comics would be lessened, and there wouldn't be constant sighs of disappointment anytime he chose to publish. I really like Alan Moore, and I own the majority of his collected works. I am a staunch defender of his adherence to rigid structure and for the little things that his critics tend to miss, like his fairly awesome dialogue and ability to mimic everyday speech. This comic has those things, notwithstanding the weak structure, so it's worth reading. If you like Lovecraft and hate sex, that is.
Posted by matthew.