When I was in high school, I read Adbusters and Naomi Klein's NO LOGO. When I got into university, I thought I had grown too old for such childish silliness. I looked down on what I considered dirty hippies. Of course, in my youthful arrogance, I hadn't considered that there is a spectrum of political ideology, and that all hippies are not created equally. Faithful readers will have no doubt noticed a tendency in my writing to look outwards, rather than inwards. I've become more interested in my own society and the problems facing it. This shift in my perception has come about because of a many factors, most notably (and most entertaining) The Wire. Another factor is my growing awareness that I haven't contributed anything to the planet, other than snarky blogging, a ton of terrible fiction, a couple newspaper articles, and a constant sense of entitlement. In my desire to learn more about my own world, I've been looking at more socially aware works of art. This brought me down the path to John Sayles and his 1977 novel, Union Dues. 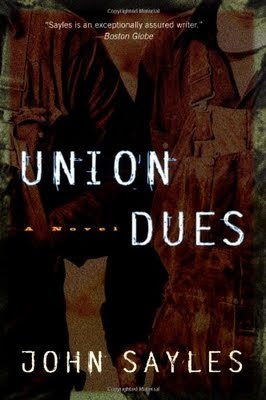 I've never seen a John Sayles film, or at least, not knowingly. I've seen Piranha, but that can hardly be called a Sayles work. He's an interesting figure in Hollywood, choosing to do work-for-hire jobs in order to finance more personal pictures, but rarely do these personal pictures garner much outside attention. It seems Sayles is a filmmaker's filmmaker, in the same way Richard Yates and Alfred Bester seem to be writer's writers. However, I understand that Sayles' personal films are political in nature, something that normally turns me off. But I wanted to read something "important", something that spoke to the socially aware writer inside of me. I chose Union Dues for this task.

Hobie McNatt is a seventeen year boy from West Virginia who has run away to Boston, run away to find meaning in his life, run away from his inevitable fate of working in the mines like his father, Hunter. Hobie ends up living with some (small c) communists who want to unite the workers and free them from the tyranny of the oppressing class. Meanwhile, Hunter leaves his job at the mine to follow Hobie, to try and reconnect with his son, to find out why he left. When he arrives in Boston, he ends up working some day labor jobs to make ends meet while he tracks down his son.

While this may sound somewhat small and intimate, a story of a father and a son and poverty, it's actually a rather big book, full the brim with characters and situations and a plot that consistently threatens to get out of hand. Rather, it's the conversations that tend to get out of hand.

This is a book of people talking and talking and talking. It's a noisy novel and any moments of introspection poke their heads out when the cast takes a breath before launching into a new tangential conversation about gambling or hookers. But thinking like this is sort of missing the point of Union Dues. This is a novel about people talking out their problems, and never doing anything about it. Hobie, the son, joins a very stereotypical 60s-style revolutionary group, and all they ever manage to do is talk and argue and self-critique and vote and argue and talk. It's not until the end of the book where the group takes action, and predictably enough, Sayles spends more narrative time listening in on their post-action debrief and sharing of individual perspectives. This is is a community, and the best way to show a community is to show how they communicate and deal with each other.

In addition to this book being about talking, it's also about the strength of community that spontaneously occurs when working class people are put together. Hunter's path through the novel sees him making friends with anybody and everybody who respects an honest and hard worker. But it's not a nostalgic novel. It's hard to tell what Sayles thinks about this lifestyle of revolution. He tends to show them at their worst and their best, equally so. Obviously, Sayles is interested in people who are not in control of society. Sayles is a social realist (and maybe even a socialist realist).

This is going to sound super pretentious, but as I remember it from university, Sayles and György Lukács would have a lot to talk about and not just because Lukács was a Marxist. I think Sayles is interested in conveying the working world because their stories are just as important. Sayles doesn't engage in fancy modernist or postmodernist techniques. Instead he uses the dialectical approach, a dialogue between the reader and the facts as laid bare. He keeps the narrator's voice distant and when he does enter into the mind of one of his characters, the narrator adopts the character's voice (which admittedly is a modernist technique). The dialectical method is a way of showing the class struggle, the overall theme of the book.

Does the novel work, then? With all this political stuff and obsession with documenting the struggles of the workers? Does the novel function as entertainment, whether or not it's didactic? The answer is surprisingly positive. I had a great time reading this book, and not just because it attempts to accurately portray the class struggle. Sayles' skill with dialogue is apparent right from the beginning. He uses authentic sounding speech to make his points, and he uses pages and pages and pages of it.

Of course, it's not just dialogue that makes this book work. There are a few absolutely stunning moments of emotion, sprinkled through the book. The flashback to Hunter's courting of Hobie's future mother, and her ultimate decline into illness, contains frequent spots of genius, a single sentence used by Sayles that conveys all the weight and grief without any of the obvious hand-holding used by lesser authors. It's like flashes of Raymond Carver.

There's another brilliant moment where Hobie and this girl flirt during a lengthy political argument in the household of the revolutionary group. Sayles gets the flirting across with subtlety and then when they end up having sex, it's a spectacular moment of understanding how his characters work. It's tender in its approach.

Union Dues isn't a perfect novel, though. The large and unwieldy cast tends to get out of control. It's almost maximalist in generating its cast. Every person with a name gets a background and a chance to talk. While all of the characters have... different voices, they blur together, making it hard to differentiate them by the end of the book. Some choice editing would have benefited this novel greatly.

Other than this, Union Dues is a pretty solid novel. I liked it, but I didn't love it. As aforementioned, Sayles' skill with dialogue is pretty good, but the cast is too large for any one secondary character to stand out. Does Union Dues speak to the political kid in me? Yes, sort of. It's interesting to see the world of the workers in a very specific time, when machinery and automation were almost done forcing manual laborers out of jobs, when the political climate was threatening to explode, when Vietnam was on everybody's minds. It's a fascinating time period to visit, without the use of rose-tinted glasses. Things were fucked up, and anybody who thinks otherwise is a fool. Sayles wisely chooses to show us a time and place that was messed up and constantly on the cusp of boiling over into chaos and violence. So, yeah, I liked the book. I'm going to read Sayles' newest book, which is supposed to be a 1000 page monster of the nineteenth century.
Posted by matthew.