Okay, so the Internet is not working in my apartment for some idiotic reason. Which means my posting is going to be rather infrequent until I can fix it. I'm at my parents' right now, and I have a few posts scheduled to be posted in the next few days, so don't worry. If you are worrying, well then, here's a review written by yours truly to slake your thirst. 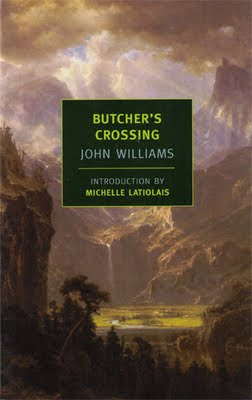 The Western is an invaluable genre. It’s extremely flexible when it comes to stories and characters, and it allows for a seemingly infinite variety of situations. It’s nimble and deft in portraying the land, inherently part of the character of the Western. I haven’t read a million Westerns, but when I do read them, I try to stick to the acknowledged classics, one of them being John Edward Williams’ Butcher’s Crossing.

Set in the 19th century, Will Andrews has left the comfort and safety of Harvard for Butcher’s Crossing, a small town right at the edge of the great wilderness. He has come to this town, inspired by a lecture delivered by Emerson, to seek an “an original relation to nature,” and he finds Miller, a grizzled veteran of buffalo hunting. Andrews hires Miller to take him out to this area where the buffalo are extremely populous, something increasingly rare near the end of the 19th century. Andrews, Miller, and two other men embark on a long and arduous journey, but they find the buffalo and they begin a long and violent hunt. But Miller becomes greedy and stays in the valley too long, until they are snowed in and forced to stay there until next spring. When the men return to Butcher’s Crossing, irrevocably changed, they find a town just as altered in ways they could not have expected.

Written in the Sixties, Butcher’s Crossing might appear to be a revisionist Western. It’s not a tale of myth or legend, but a tragedy of violence and the way the landscape can change a man. But it’s revisionist in the sense that the book rejects the Western. Instead it embraces the theme of the power of nature, the power of the untamed wilderness, and marries this with Williams’ approach to his characters. There are no gunfights or Mexican standoffs or outlaws. Rather, there are men, businessmen, hunters, scholars, drunkards, and everything else populated a real Western town.

Williams only wrote a few novels in his career as a teacher of creative writing. I’ve only read this novel by the man, but I can sense the stamp and the forge of the school of creative writing with this book. Every sentence feels carefully crafted, almost to the point of delicacy. I don’t mean the prose is so delicate as to break easily, but I mean delicate and intricate like a snowflake. This overall impression isn’t necessarily negative; I’m merely pointing out that I could have guessed Williams’ background as a writer based off the prose. Creative writing schools often produce a similar style of writer (note that I did not say style of writing), which is that every single sentence has been sanded, rubbed and ground down to the tiniest thing possible, where every superfluous word is discarded through endless revision and endless drafts.

But this works to Butcher’s Crossing’s benefit. It’s a short novel, and I cannot imagine it being any longer than it is. The book is almost simplistic in plot and execution: men go hunting, get snowed in, come back. Where the novel’s complexity lays is its cast. The four men are carefully sketched over the course of the novel, but with the bulk of the focus on Andrews and Miller, two completely different people who end up a little bit more similar than they expected by the novel’s end.

The absolute best part of the novel comes at the very end, when they have returned to Butcher’s Crossing. As Andrews takes a bath, his first in almost 7 months, and a shave, he looks in the mirror and sees his face, changed and hardened. His physical being has come to reflect the valley from whence he came. Internally, he has not become disillusioned. A lesser writer would have gone through this song and dance. No, instead, Andrews, a small scholar with no previous experience being in the outdoors, has not become disillusioned, but rather, has come to grow up. Nature is the great equalizer, he has discovered. Rather than be shy and soft, he has become a man. The prostitute he was too timid to have sex with before his journey, this whore becomes his concubine and they stay in bed for days, sleeping and making love. It’s a fantastic section and so unbelievably complex. When they arrived in town, I expected the novel to go one way, and Williams defied that by going his own, frankly superior, way than what my imagination came up with.

I didn’t really love this book though. I liked it, and I can appreciate its artistry, but this appreciation is more for the technical skill than the overall work of art. It’s similar to appreciating a good piece of engineering. The product might be totally functional, but the only thing you can notice is how clever its put together, instead of loving how well the product accomplishes its task. A lot of people feel this way about Joyce’s Ulysses. (not me though). Butcher’s Crossing is a well constructed artifice and I really loved the smaller details, like the aforementioned homecoming, or how well Williams takes Andrews through his first skinning of a buffalo. But the overall work left me somewhat cold. The individual and excellent parts never coalesce into something greater than its sum. It’s frustratingly nebulous.

Part of this is Williams’ absolute detachment from the narrative. There is no authorial voice in this novel. It is merely a description of the events, and the reader must extract the relevant meaning from the barest of information supplied by the narrator. This is similar to Hemingway’s iceberg style of writing, which I happen to dislike. Williams never steps into his own narrative and comments or judges or applauds. He stands far away from the book and lets the characters go their own way. Instead of the author placing obstacles for the cast to get through, it’s like Nature itself puts itself in the path. While this is well done and very careful, again, it’s a technical aspect I can admire, but overall it just doesn’t work for me.

Of course, Butcher’s Crossing is a classic of the genre, and most people will disagree with me. I liked the book and I thought it was well done, but not well put together. There’s a coldness that ends up being the totality of the experience. It’s the combination of the prose ground down, the cast’s distance from the reader, and the author’s distance from the reader. Reading Butcher’s Crossing is like living on the Moon, cold desolate and completely devoid of humanity – no doubt the point of the novel, but that doesn’t mean I liked it.
Posted by matthew.