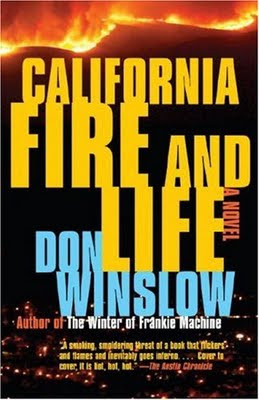 Oh look, we’re reading another Don Winslow book. Really? Yes, really. Winslow has become my go to guy when I’m stuck reading something large or difficult. It’s an easy way to get my mind to relax. Plus, he’s the ultimate summer read. I’m very slowly running out of Winslow books at my library, which is a huge problem, so I’m trying not to read them all at once, like I tend to do with authors I like. This one I picked up because I’m having trouble sticking with Marlantes’ Matterhorn, a book I’ve been reading for seemingly months. But that’s a different review to look at.

Jack is a claims adjuster for California Life and Fire, and he’s specifically trained for fires. When Pamela Vale dies, burned to death surrounded by vodka and cigarettes, it’s Jack that’s sent out to investigate the fire and figure out if the fire and death are accidental. Unfortunately, Pamela was married to Nicky Vale, a Russian businessman with deep ties to the local criminal underground, who seemingly has plans to eliminate the rest of the Russians and the Vietnamese from their little area of Cali. When Jack inevitably concludes that the death and the fire were not accidental, he unwittingly steps into a huge clusterfuck that threatens to explode with violence.

Well. This isn’t going to be a long review. We all know where I stand on Winslow. In fact, I’ve said this before, then ended up writing 1600 words about how awesome this guy is. No, I’m going to be brief this time. I knew what I was going to get, and I loved it, and then I finished it and wondered why there aren’t more movies made of his shit.

However, I have to say, I didn’t LOVE this book as much as his other stuff. Shocking, I know right? Well, California Life and Fire is good, but it’s not great and here’s why. It’s extremely exposition heavy. Like threatening to buckle under the strain of having to explain all this chemistry and physics to an uneducated audience. I certainly know little about the science of combustion, but that doesn’t mean I wanted to read a nonfiction book about fires with a murder mystery mixed in somewhere.

When I say it’s exposition heavy, I really fucking mean it. There is a twenty page long section that explains how fire functions. And that’s just a small piece of the overall exposition. Obviously, Winslow has to do a lot of lifting and straining to get the audience on the same page, or at least enough to follow how it is and why it is Jack comes to his scientific conclusions about the fire. It’s Dan Brown spending twenty pages explaining the voting for the pope in Angels and Demons (good lord, I’m admitting to reading that piece of syntactical shit). However, Winslow’s prose is never flat or boring, so it’s often entertaining to read his exposition. It’s just there’s a fucktonne of it.

Also, I just didn’t FEEL the characters like I did with his other books. I read Savages months ago, and I think I could still accurately sketch out the three main characters – they just stick with you because they are so memorable. Too bad the same can’t be said about this book. Jack will fade away into the mist of strong badass protagonists who don’t take shit from anybody. He’s not funny enough or interesting enough to hang an entire novel on him. The best we know about him is that he surfs a lot (no shit, everybody does in Winslow’s Cali) and that he can fuck people up with his fists. Great. So can everybody else. The main characters of Savages, and Bobby Z, while similarly archetypal, still retained enough individual spark to create interest in the reader.

But these two issues aren’t enough to ruin the experience. In this book, more so than Bobby Z or Savages, Winslow juggles quite a few plot strands that happily and epically coalesce in the final third of the book. It’s the sign of a good writer with capable hands. When everything comes together, it’s like the ending of a melody that just fits. And of course, Winslow’s prose retains its stark and conversational beauty, the kind of prose that seems easy to duplicate or mimic, but is actually way harder than it looks.

So yeah, I liked California Life and Fire, but I didn’t love it. Unfortunately, the last Winslow I read was Bobby Z, which might be one of my most favourite thrillers I’ve ever read. I just wish my library had more of Winslow’s stuff. I only have three more books available. I might have to buy his other books, which frightens me, because apparently they’re the early stuff which isn’t as good. Oh well. I love Winslow’s writing enough that I’ll probably find some good in it anyway.

See? I can write shorter reviews.
Posted by matthew.