When I was 15 or 16 years old, I wrote a novella about the My Lai Massacre. I remember it being visceral and very stream of consciousness. I wanted to try and confront my adolescent obsession with war, specifically, the Vietnam War, something that continues to interest me. With my novella, I wanted to challenge notions of honour, nobility, and the wages of war. I can't say for certain I was able to do so; the novella is lost in the digital sea, along with my specific memories of it (Although, tangentially speaking, I remember there was a lot of psychoanalysis, or at least as I understood it, on the part of the main character). I mention this because my Vietnam novella was no doubt not very good, and I'm absolutely certain was not accurate in the details, no doubt because of my (still present) disdain for research, and the fact that I didn't live through it. It seems that the best and most accurate war novels are the ones written by the men who fought the war. This brings me to Karl Marlantes' Matterhorn, a behemoth of a novel, like its very title. 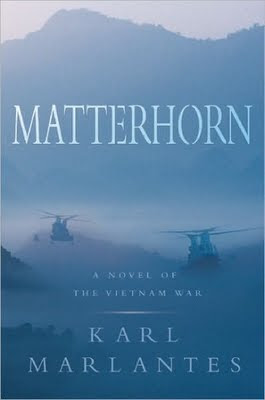 The novel follows Second Lieutenant Waino Mellas along with the men under his command, and a few of Mellas' own superiors. It's 1969, and the war is not going as well as it could. Bravo Company is told to give up the mountain they are situated on, as it is no longer a tactical asset. However, the mountain is quickly taken by the enemy, and Bravo Company is ordered to take it back, no matter the cost.

Matterhorn is a long and incredible read. It's satisfying, it's powerful, it's dynamic, it's intriguing, it's suspenseful and it's haunting. I fucking loved this book. But not without some slight reservations, which I will address first, and then get into why I loved it so much.

Marlantes allegedly wrote this novel over the course of 30 years. Now, this doesn't necessarily mean that he wrote, in order, chapters here and there for 30 years. We have no idea. We can't even guess, because the author's voice barely changes throughout the novel. I mention barely. The authorial voice improves over the course of the novel, and this is only noticeable in the small details, the specific words that the narrator uses.

For example, often the narrator will employ the word "rump" in reference to the Marines' posteriors. Now, there's nothing inherently wrong with using this word. The problem is that there is a disconnect between the reality of the situation and the word the narrator has chosen. "Shrapnel in the rump" doesn't quite have the bite that it should have, when describing something so painful and so raw. Luckily, this issue seems to slowly dissipate when we reach the final third of the novel, when shit goes down hard.

All of the character speak in roughly the same jargon-heavy almost-impenetrable dialogue, which is just laden with profanity. The Marines say "fuck" and "ass" and "shit" so why can't the narrator? Does the narrator want to hold everybody at a distance? I'm not sure, but it's slightly distracting sometimes.

As a decorated veteran of the war, Marlantes is very familiar and very proficient in the jargon and the dialect the military uses. As a writer, he has to walk a fine line between immersing the reader and holding the reader's hand through the more technical aspects of the book. Thankfully there is a glossary at the end of the book to explain some of the terms, most of which are familiar to those who have watched a war movie in the past 30 years. However, Marlantes sometimes stumbles with some of the scenes in which the superiors discuss strategy. During these scenes, I sometimes had trouble following along with the nuances and the finer points of their strategies. Like I say, it's a very fine line, and if every once in awhile, the author can't keep the reader at the same level, it's not the end of the world. I understood generally what the commanders were planning. It's never obfuscating for the sake of it.

Finally, in terms of complaint, there are just way too many damn characters to keep track of. Part of the problem is that this book took me about two weeks to read (with two books as a break in the middle) so maybe I had trouble remembering everybody. But there are just a lot of them. Marlantes makes... most of them individuals who stand out, but a decent portion of them melt into the same Marine. Scenes at the beginning of the novel echo slightly at the end, but it's tough to maintain the emotional outcry when you just can't quite remember who this one particular Marine is. There's a command structure at the beginning of the novel (in addition to a map) but it only mentions the core cast. Try remembering all frigging 60 characters introduced over the course of the first 300 pages. It's not easy.

All of these criticisms are just superficial, signs of a first time writer. But they're not fatal in the slightest. The good significantly outweighs these small issues. First of all, for a first time writer, Marlantes is just absolutely powerful at conveying images to the reader. The eponymous mountain of the title just looms in the reader's imagination. It's an important visual, and Marlantes completely sells it. Not just this, of course, but the entire shebang. The jungle, the wounds, the violence, the tears.

This skill works in conjunction with the grittiness and realism of the depiction. It's all about the details with this novel. I would estimate that at 50 percent of this novel's success is due to the amazing level of detail in everything. If the Marines are suffering "jungle rot" or "immersion foot" then the author will make you feel it. If the Marines are digging a latrine or dying of thirst and hunger, then you will feel it. Every single numbing exhausting detail is pushed onto the reader until the audience is carrying the hundred pounds of gear on their back as well.

When I say "grittiness" I don't mean like a cop show is gritty. I mean gritty in the way that shows life in war isn't life at all, but a struggle, a never-ending uphill battle to stay alive. It's also a constant war to stay sane in spite of the death, violence, and seemingly nonsensical plans of the brass. There are a few scenes, used sparingly, but tremendously effective, in which we get into the head of a Marine, and he's just thinking about his mom, or a girl he'd like to hold, or how he's never done this or that. It's heartbreaking and emotionally exhausting for the reader.

Even though we're bombarded with images of "men" in war, cigars installed in the corners of their mouths, stubble defiantly prickling the air, the reality is that most of the grunts in the Vietnam War were just 18 and a lot of the officers were just in their twenties. These are boys, and the author never lets us forget it. Marlantes confronts the imagery of the masculine, the manly man in war. He shows us, no doubt from personal experience, that there were a lot of tears. These boys cry when their friends die. They cry when it gets too much. But when they are, after all, highly trained soldiers, and they are able to kick ass when they need to.

But the cost is high. There is not a lot of war fiction that has captured my heart the way Matterhorn has. It's just heart-rending - the entire thing. It takes a long time for Marlantes to really get to the point, but when he does, it's devastating.

The novel starts out sort of slow, with the author using small episodes of day to day life in the bush in Vietnam to get the reader on the same page. There's excursions, marching, digging trenches, building LZs, stuff like that. It gets to be slightly numbing until after the first third of the book. Then the overall plot starts and Marlantes begins moving his pieces around the board (of Vietnam) for the finale, an absolute epic.

The big firefight at the end of the book is - in one sentence - blistering but always coherent. It has to be mighty difficult to convey the chaos and the insanity of a battle, but somehow Marlantes never loses the reader. While the geography of the site is opaque once in awhile, it's never unclear where the principal characters are or where they're headed. Marlantes even describes the inherent chaos of the battle without ever losing focus on what he's describing. While this might seem facile and facetious to mention, I think it's an important and amazing thing to pull off, almost more amazing considering this is Marlantes' first novel.

Ultimately, Matterhorn is a masterpiece of fiction. Not just war fiction, but fiction in general. Even if the novel suffers from slight clunky sentences every 10 pages or so, or even if the novel suffers from some purple prose and simplistic conclusions near the end, the sheer reality of the experience drives it home for the reader. It transcends the limitations of the simple conclusions and rises to the realm of Great Literature. If I was teaching a course on American historical fiction, I would surely use this as a major text. It perfectly captures this small company of men, their fears and hopes and lives and tears.

I could continue, but I think I've made my point on how much I loved this novel. I highly recommend this for lovers of American history or of war fiction. I can say with supreme confidence that the Vietnam novella that I wrote pales in comparison to this book. It's long, it's tiring, but the journey is incredible and powerful. This is one of the best books of the past 5 years that I've read, easily.
Posted by matthew.