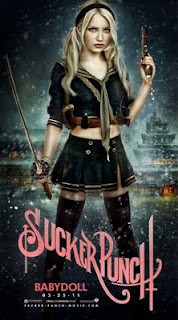 Set nebulously in the Sixties, 20 year old Baby Doll gets thrown into a mental asylum by her lecherous and greedy stepfather. Her lobotomy is scheduled for 5 days in the future. Immediately, Baby Doll goes into a delusion where she is a dancer in brothel, and she befriends a bunch of other dancers. Each time Baby Doll dances, she enters into another fantasy where she wears a tiny skirt, wields a katana (with one hand!) and a pistol with charm bracelets dangling from the butt. In order to secure her freedom, she must find some magical totems which correspond to useful items such as a map and keys. Each time she dances, she and her new friends battle Nazis, mechas, demonic samurai, and even a dragon.

To say that this film is style over substance is far too neutral. This film is execrable. The moment I left the theater, I thought that maybe this movie wasn't too bad. But the more I've thought about it, the more I think that there are no redeeming features to this film apart from its decent but not great soundtrack.

At first, I was willing to concede that the premise of the film was interesting and different. Girls go into a fantasy land in order to escape the horror of their own reality.... Oh wait. That's like fucking everything else out there. Isn't The Bridge to Terabithia about this very same thing? Except that book/movie doesn't make me feel squeamish for watching girls get threatened with rape every five fucking minutes.

Yes, the girls are gorgeous. And in tremendous shape. But the film positions the viewer as voyeur - sometimes literally looking through a keyhole at a potential rape. When Baby Doll first steps into the (second layer) fantasy world, wearing the tiniest skirt, brandishing the longest katana, the Bjork music just pumping on the soundtrack, I admit to looking. I mean, looking, like the male gaze. This was a gorgeous and strong female who is kicking ass like it's serious business. But this euphoric moment only lasts for a couple minutes. Then she's flipping all over the ground, fighting a stone samurai, and her skirt is flapping in the breeze, exposing her (unsexy and functional) black undies.

I'm being told to look at this girl. I'm being directed to watch this girl take control of her situation and kick ass and take names. It's supposed to be empowerment, I suppose. I bet Zack Snyder thought he was super cool, letting the girls kick ass for once. Except the parameters for this to happen is a constant threat of rape and murder and lobotomy. There's a constant and tenacious sexual subtext to everything. Positively every scene is dripping with sexuality. The movie screen was practically sweating at me, heaving its mighty bosom and asking me to willingly participate in ogling this nubile female flesh.

It's hard to really complain about a film that's so upfront with its 13 year old boy fantasies come alive and packaged in female empowerment trappings. Oh wait. Yes it is. Snyder thinks this film is about lending strength to girls and putting them in control of their situation.

And now we come to the title. Yes, the title of Sucker Punch refers to a couple things. Mostly, it refers to the sucker punch of an ending. There is no such thing as perfect victory unfortunately, and there is a great sacrifice. The lobotomy mentioned so many times, comes to happen, taking Baby Doll from her drab grey world (literally) and placing her permanently in a world of colour and action, her definition of freedom.

Does anybody else have a problem with this? She willingly sacrifices herself in order to achieve a semblance of freedom in a fantasy world. She willingly subjugates herself to a man's world and then "escapes" into a reality that doesn't exist. There's something not quite right about all this. This brings us back to the complaint of style over substance. This movie doesn't mean anything. Is Snyder trying to tell us that a fantasy world in which we're in control is better than being imprisoned in someone else's world? Cause, buddy, that's not freedom - that's mental illness.

Maybe I'm in the wrong for taking a more feminist approach to this movie. Maybe I'm in the wrong for expecting anything more from this movie other than people kicking ass and taking names. No, wait. No I'm not. The ponderous and pseudo-poetical voice over narration that permeates the beginning and the end make me think the makers of this film aspired for something more than action and spectacle. The narration points to themes and points to "meaning" in the nebulous and murky way that amateurs think it means.

This film wants to be something more than the sum of its parts, but it never rises above video game structure and borrowing liberally from other genres. None of the fantasy sequences really bring something new to the table. The samurai, the dragon, the steampunk Germans. None of these things impressed beyond the visceral impact of seeing them. My mind registered them, I recognized them, I instantly moved on. My eyes were constantly assaulted with this "cool" images, but nothing is made of them. They're derivative and unoriginal. The orcs in the dragon scene? Their makeup and style are lifted directly from the Lord of the Rings film trilogy. Every element is borrowed from something else.

Since all the elements are cobbled together from better movies, and the premise is borrowed liberally from archetypal story structure (and it's almost made painfully clear by the screenplay itself) and the "themes" and "meaning" are so positively elementary as to be preschool level, what else is there to this movie? Other than, of course, the icky fake-feminist angle that Snyder tries to play at.

Nothing. Nothing is the answer. There is very little to recommend with this movie. I can't say I actively hated the film, though. There are some small moments of entertainment, like the very first big action scene. After that moment, the film derails in cliches and wrongheaded sexual politics.

Many reviewers have made mention of the video game structure of the narrative. It's worth discussing here as well. The structure of the plot goes like this: there's an item we must retrieve. We go into a fantasy, where there are hordes of faceless and expendable enemies to murder and dispatch. There's a "boss" (a dragon, a burn-victim German) that must be defeated for the item to be secured. The girls complete this objective. The fantasy ends and we move on to the next objective. Does this sound familiar? Of course it does. It's EVERY FUCKING VIDEO GAME of the past twenty years.

There's a slight suspicion I have that this film originated as a video game and Snyder decided to change to film for some reason. I would have totally forgiven the simplistic plot and bizarre sexual stuff if this had been a video game. Hell, I probably would have loved this as a video game. While I talk a lot about story and the primacy of it, I tend to be a little bit more lenient with video games. After all, the medium has come of age yet; it's still maturing and finding its feet, as a medium, I mean. So a simplistic plot such as this would have been acceptable.

But as a film? No, I don't fucking think so. This thought pretty much sums up my feelings about the film itself: "no, I don't fucking think so". Especially when it comes to the bizarre Snyder signature camera tricks, like ramping up and down the speed, or the fake that everything and I mean everything has a haze of artificiality to it. Just like in Watchmen and 300, everything feels fake. This is due to the use of green screen and CGI of course. But here's the paradox: I'm more willing to accept the green screen use in the fantasy sections, like when the girls are fighting Germans than I am to accept the use in "reality". It's like using the green screen in "reality" increases the feeling of artificiality and wrenches from the illusion and reminds me that I'm watching a film. And not in the good way.

Whatever. This film has the ickiest sexual politics of a film I've ever seen (and this coming from the guy who wrote 1600 words on Easy A's sexual politics). It's not that good looking, the girls are all boring and cardboard as actors, the plot makes little to no sense, and the sucker punch of an ending makes me feel squeamish. So, fuck you, Sucker Punch. You're a shitty fucking movie.
Posted by matthew.