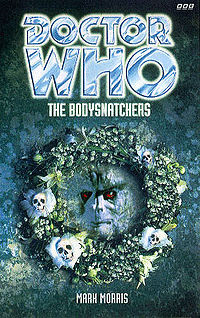 Whitechapel, 1899. People are acting rather strangely. The man who owns the local factory has gone from loving family man to a workaholic who never leaves. Another man has hired two ruffians to procure corpses, no matter where from. The Doctor and Sam arrive to pick up a magazine and end up embroiled in a conspiracy of somebody or something kidnapping people. A shocking face from the Doctor’s past comes to light, and the Doctor must make a terrible decision.

I said in my last EDA review, Vampire Science, that I’m always perturbed when the Doctor uses physical violence to solve things. I’ve always liked him as a character because he’s a Trickster figure, one that uses his wits and guile to get around. So imagine my surprise when in The Bodysnatchers, the Doctor punches out some dudes and breaks somebody’s nose. With his fist, no less. How crazy is that? It’s like this writer has pretty much missed the point of Doctor Who. I’m not saying the Doctor has never used his hands to fix things – just look at the tediously dressed Third Doctor. But this is the 90’s, man. A time of political correctness and burgeoning social awareness. Just look at Sam, an irritatingly stereotypical 90’s character. It’s like she stepped out of a Douglas Coupland novel. You’d think that both of them would be averse to violence, and yet, here they are kicking ass and taking names. Oh well.

This novel’s fairly okay. Nothing special for the first three quarters of the book. It’s an obvious and forcibly classic Who setup: mystery, reveal to be aliens, the Doctor is put in front of their leader so it can have a good gloat (remarked upon by this Doctor and in Deceit by the Seventh Doctor), and then the Doctor gets all clever and foils their plan. Well, The Bodysnatchers follows this formula up to that last part.

Spoilers here on out. The aliens turn out to be Zygons, from a Fourth Doctor serial that I’ve never seen. They look like more rounded versions of Spongebob Squarepants, if that helps imagine them. The Doctor’s “clever” plan (it’s not clever at all) is to knock ‘em out with sleeping pills and then drive them all in the TARDIS to a different planet. Instead, and here’s the shocking part, the sleeping pills fucking kill them all!

But here’s the best bit, here’s the bit where you just know that the writer doesn’t fully understand Doctor Who. When confronted with this information, the Doctor doesn’t get upset. No, the narration reminds us that the Doctor has got his hands dirty before, even committing genocide, but we can’t deal with that right now.

Are you kidding me? Thank heavens that both the New Adventures, Russell T Davies and Steven Moffat have picked up on this thread: that the Doctor is the most dangerous thing in the entire Universe. Admittedly, this genocide of the Zygons is accidental, but the book completely glosses over the remorse and the epic guilt that the Doctor carries at all time.

So let’s recap: we have a Doctor who commits mass murder without a second thought, plus he engages in fisticuffs on a regular basis. The important question here is, is this what the Eighth Doctor is like? Is this who he is? It’s only his fourth real adventure (the movie and three books) that we know of, so it’s possible. But that doesn’t seem right. The Eighth Doctor I know is a sensitive fellow, more in tune with humanity than, say, Seven or Six. I’m going to chalk this up as blatant mischaracterization. Almost character assassination, if you ask me.

I can’t say I was really all that impressed with this book. Sam’s far too thin to be interesting as a character, the supporting cast was okay (Litefoot from a Fourth Doctor serial makes an extended appearance), and the Doctor was bizarrely written. The prose was okay, I suppose. The Bodysnatchers could have done with a little sprucing up, I’m afraid. Somebody should snatch the body of the writer and switch it with somebody with talent! Oh-ho! I’m on fire over here. Thank you. Thank you.
Posted by matthew.