Okay, so the fourth book was a bit of a mindfuck and kind of hard to follow. Would the fifth book, the first in a loose trilogy, follow the same sort of pattern or would it go back to the form set by the first three books? 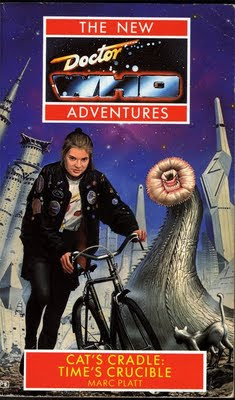 A strange silver cat has been hanging around the Time Lord and the girl from Perivale. It seems that the cat is an avatar of the TARDIS, auguring a danger far greater than ever before, so great that the TARDIS even shuts out the Doctor and Ace. Something has invaded the blue box and it's causing all sorts of problems throughout time. Then, the TARDIS collides with another timeship, causing the blue box to explode into nothingness. Ace wakes up in a grey world, populated by angry chrononauts who want answers, but the Doctor is nowhere to be found. Time is flowing in all directions in this crazy grey world and Ace has to figure things out, because she's got a glimpse of her own future, and it's harrowing.

Marc Platt wrote Ghostlight, allegedly one of the more opaque and impenetrable serials in Doctor Who history. He's also famous for furthering the Cartmel Masterplan, but not really in this book. Cat's Cradle: Time's Crucible is a very confusing and abtruse book. It's also very fucking long.

This is the longest New Adventures book so far, coming in at an incredibly long 350 pages. I'm not really sure why it's so long, nothing really happens in this book. I'm going to try and not be overly negative, but really, I did not love this book.

Superficially, it's not a bad novel. The more complicated aspects of the novel, like the flow of time in this strange city, is done rather well. There are a lot of instances of prolepsis that pay off, if you can remember everything and if you can keep the strange chronology in your head. The Captain of the timeship that collides with the TARDIS has lost an eye at some point, but a younger version of him is running around with two eyes, so we know that he didn't lose an eye in the crash. So the question is, how and when does he lose the eye? The answer will surprise you. This is only one of many examples where Platt plays with time and form. These parts work, but only in a technical sense.

What throws this book off is Platt's prose. It's turgid, purple and far too in love with its self. He describes things and events as far away as possible, as an attempt to infuse everything with an oneiric kind of feel. It doesn't work very often. The whole novel is written like this and it just distances the reader from understanding what's happening. One of the crew members of the timeship has the power of pyrokinesis, but Platt never fucking says this. Instead, the kid suddenly displays this power when the plot requires him to. I'm sure Platt tiptoed around this point earlier in the book, but I didn't pick up on it.

The other major problem with the sheer amount of fanservice. Here's a novel that provides an explanation for why the Time Lords don't have children, and a novel that helpfully offers the origin of the Sisterhood of Karn. Now, I am a big Doctor Who fan, but I'm not that big. I wasn't curious about either of these things. In fact, anytime the Doctor deals with something from Gallifrey, I tend to get a blank look on my face and wonder when things will move on. I've never found the Gallifreans to be interesting. Never. Maybe it's the pompous robes and weird hats - maybe it's the irritating Star Wars-esque naming conventions. They bother me in the same way I'm bothered by Klingons and Cardassians: they're just too one-note.

Okay, so what's good about this book, then? Earlier I said I didn't want to be too negative. Well, there are positive points to say in regards to this novel. First of all, the scale and the ambitious size of the novel are commendable. Platt has written something incredibly intricate and everything seems to move together like a giant clock. The timey-wimey aspects of the book are very labyrinthine and this is a credit to him. I want time travel books to challenge me, and Platt certainly does.

There's a plot element (reused from the previous book) that bears looking at. One of the major problems of the new era of Who is that the Doctor is extremely powerful: his sonic screwdriver does everything, he's able to pilot the TARDIS expertly, and he's Machiavellian to a perfect degree. Two of these elements come from the Seventh Doctor, but Platt (and Cornell) take away all of his tricks to provide a sense of true danger. The Doctor disappears into the vortex of time at the beginning of the novel, has his memory stolen, and his TARDIS destroyed - he has become a regular person. Now that's raising the stakes. Cornell sort of visited this with the fourth novel, but Platt takes it to the extreme. Moffat would do well to remember this and maybe take Eleven down a peg or two in order to keep the suspense up (and this is especially true of the midseries finale that aired last week). I did enjoy Platt doing this, but it kind of echoed the previous book, lending it a sense of déjà vu - not really Platt's fault though. The Doctor moves with a despair and a lack of purpose, and it makes the book more frightening.

So it's not a wash of a book. It's still enjoyable if over long and over written. Both Ace and the Doctor are well written, and a couple of the chrononauts are satisfactorily characterized, more than most secondary expendable characters in Who fiction.

With five books done, the question arises: is it worth continuing? Are these books good enough to read about 60 something? Um... not really. There are a billion other books to read out there. But this doesn't mean I'm going to stop. Unfortunately, I want more. I'm going to keep reading these until I get sick of them. Not only that, but I have 80 of the Eighth Doctor Adventures to read. Plus another 50 Missing Adventures/Past Doctor Adventures. We have officially fallen into hardcore nerd status on this blog. Stay tuned.
Posted by matthew.