Alright, let's just dive into this, shall we? 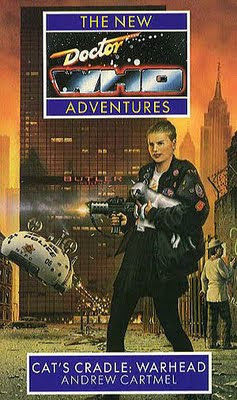 In the near future, a large corporate conglomerate has devised a way for the super-rich to avoid the impending ecological oblivion by transferring their minds into a series of supercomputers deep in the heart of a mountain where they will survive forever. The Doctor has sent Ace to Turkey to pick up a mysterious item, to bring it back to Kent, where another item waits for them. Slowly and inexorably, the Doctor is assembling a weapon, a weapon strong enough to defeat a corporation that doesn't value life at all, one of the greatest crimes possible in the eyes of the Doctor.

Carmel's first book for the New Adventures line is the second in a loose trilogy, and it's the first in Cartmel's own "War" trilogy, whereby each novel of his has the word "war" in the title. As far as I can tell, Warhead doesn't really fit into the Cat's Cradle's trilogy at all, unless you count the thematic scope, in which the Doctor creates a careful plan to defeat his enemies.

Luckily, Cartmel has the best prose out of everybody I've read in the New Adventures line. Hands down the best prose. He sinks the reader into enough physical and mental detail to keep things imaginable but also keeps Ace and the Doctor had a far enough distance to play this long game. There's a scene in which a Turkish mercenary, stinging from an unintentional insults, assaults Ace with a lead pipe. The fight that ensues is harrowing and brutal, but the choreography is always clear and coherent.

The game that the Doctor is playing is vast and somewhat confusing. The conspiracy that he has uncovered is well disturbing, but I haven't quite figured out how all the pieces even got to the starting position or how the Doctor was able to even see them. How did he know about the plot in the first place? How did the first part of the weapon get to Turkey, or more importantly, why did it find its way there? In the very last act, at the climax, the tables are slightly turned, and it's never clear how that happened. The problem is that Cartmel wants to keep the reader in the dark, and the only information he is willing to provide is long tedious examples of future technology he has imagined.

In terms of hard science fiction, Warhead succeeds at imagining a very real future. Written in 1990 or 91, Cartmel has imagined all sorts of ecological stuff, holograms, how we speak on the phone, weapons, and computers. He stumbles slightly with CDs and floppy disks, but that's forgivable. Most of the book is scenes of exposition in which Cartmel has thought of something clever and wants the audience to be impressed with how clever he is. It's not like Cartmel is a futurist of William Gibson level, so it's hard to be really that impressed.

When all of these hard sci-fi concepts are injected in the book, it weighs the story down and distances the reader from the Doctor's game. Plus, the Doctor is only in a handful of scenes, and he is exceedingly abstruse. Now, there's a word I didn't expect to use in two consecutive reviews of Doctor Who books. However, unlike the previous book, this one sort of benefits from it.

What is sort of very interesting with this book is that this Doctor is the antithesis of the previous book's Doctor. Here we have a Doctor who is not full of despair or indecision. Here we have the scariest kind of Doctor: the master manipulator, using everybody and everything like pawns in chess to right what he sees as wrong. This thread is picked up a few times by the modern era, especially the end of the Tenth's run and recently with the Eleventh getting superbadass on Demons Run. This is the kind of Doctor that makes people quake with fear: utterly merciless and driven. Very intriguing.

My overall feelings with this novel are difficult to explain. Certainly, I enjoyed the prose, and once the Doctor's plan comes to fruition, the payoff is excellent. But it's a long road to get to that point, and the multitude of diversions and digressions hurt the pace of the book. It's a Doctor Who story in name only, as the TARDIS appears in one extremely brief scene, and the Doctor even uses a plane to get from Turkey to Kent, England. One could replace the Doctor with a similarly badass Machiavellian manipulator and achieved the same effect. That's why this review is so... hesitant. I'm hesitant to conclude positively or negatively. Again, I have to reiterate, the prose is gorgeous and the game is fantastic. It's just... this book could have been better, but it's hard to pinpoint exactly where.

Regardless, I'm not done with the Doctor yet....
Posted by matthew.