With a good book behind us, would the New Adventures line deign to provide me with another? We move onto the third book in the loose trilogy called Cat's Cradle: Witchmark. 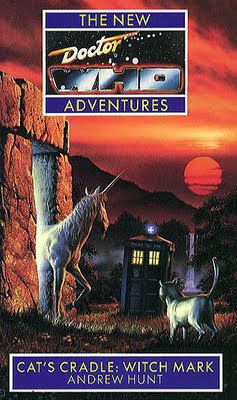 The TARDIS, on its last legs, deposits the Doctor and Ace in Wales for a bit of a vacation. Unfortunately, trouble has a way of finding the Time Lord. It seems that this little village in Wales is home to a policeman who sets a centaur on fire, a bus full of dead people with million of pounds hidden in luggage, and a veterinarian who stumbles upon a unicorn's horn. On top of this, the Doctor and Ace accidentally walk through a stone circle and find themselves in a mysterious and fantastical land, where things aren't quite what they seem.

There's a Doctor Who fansite that aggregates reviews of everything Who-related. I sometimes read the reviews to see what other fans are saying about a particular book. Not every review is well-written and not every review is insightful. However, this one review kind of summed up this book in one perfect phrase: "fantasy bollocks". I can't think of anything better to say than that.

This book is a complete load of bollocks. The prose is absolutely terrible. And I mean fucking terrible. I haven't read prose this bad in a long time. The author describes everything in the most purple and irritating manner. Here is an example:


"Her hair tumbled around her shoulders in chestnut streams and when she smiled it was as though the sun had emerged from behind a cloud."

Yeah. It's that bad. Now the whole book is written like this. If the prose was awful, well maybe there's a saving grace with a decent plot? Nope. Sorry, son. The plot is utter bollocks. The reveal at the end is so painfully obvious and very classic Who that is kind of spoils the experience. The end barely makes any sense and there's so much of the cast going back and forth to arrive at the conclusion. They travel from one end of the mystical land to the other for no fucking reason. On top of that, the author introduces all this irritating political stuff related to the various tribes in this land - as if we gave a shit at all.

Plus, the characters are poorly written and I mean poorly. You can tell the background of the character by the stereotypical exclamations they make. For example, all the Welsh say "boyo" and all the Americans say great masculine things. We know Ace is English because she only ever says "Brilliant" or "Wicked" for like the entire novel.

Ace seems entirely unaffected by the events of the past books. It's almost like she's not Ace at all. The Ace of the last few books was a weary warrior, starting to grow tired of the neverending battles, and the only person she trusts now is the Doctor, even if that means being a pawn. In this book? Ace is a 16 year old girl who plays rock n roll records at 2 in the morning. She displays none of the careful characterization set up by the last few books and she's unbearably annoying in this book.