After a break from New Adventures with an Eighth Doctor book, I thought I'd take a stroll into the Missing Adventure line. There doesn't appear to be an order in which to read these, so I started with a Fifth Doctor adventure, written by Craig Hinton, called The Crystal Bucephalus. Let's take a look. 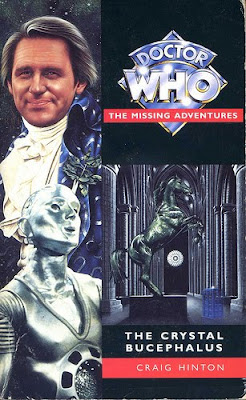 The Doctor, Tegan and Turlough are wrenched from their dinner in 17th century France into the most intriguing restaurant in the history of the universe, The Crystal Bucephalus. It turns out that the Doctor is the owner of this restaurant, where patrons are sent to eat in restaurants back in the past. But the Doctor's presence is an ill omen for the restaurant as another unwelcome visitor hangs in the background, waiting for the chance to strike.

There's an amazing bit to this book that made me laugh hysterically. The Doctor is cast out of the "grid" of restaurants in the past and he finds himself on a planet far far far away and a long long long time ago. He's out of the "grid" and has no way of getting home. So, his ingenious solution is to open a restaurant and make it famous enough to eventually become part of the "grid"! Now that's some four dimensional thinking!

This whole book is rather enjoyable in the same way the previous paragraph is. There's some exceedingly clever bits, some good plot twists, and Hinton spends enough time setting up a future society with enough back story to make the big plot twist at the end very satisfying and shocking rather than just "oh that happened". It reminded me a lot of Dan Simmons' Hyperion Cantos actually - not just the complicated backstory, but the love of hard science fiction.

Hinton fancies himself a hard sci-fi writer, I guess, which is why there is an unusual amount of technobabble in this book. There's three, count 'em, three temporal physicists who are constantly "reversing the polarity of the neutron flow" and then you add the Doctor to the mix and you've lost the rest of the cast, even the intelligent Turlough. A lot of the technobabble is somewhat stupid - a lot of 90's era nonsense about hyperspace and holograms. It's all very Star Trek. But Hinton sells it well enough to have the outcome of the discussions make sense, so I suppose it works.

The other problem with this book is that Hinton has nothing for Tegan to do other than scream, run around and ask questions. She displays none of the "brave heart" that made her such a memorable companion. This book also fails the Bechdel Test. There are three major female characters in this book and every conversation they have revolves around the men in their lives. It's seems odd to require a Doctor Who book to pass the Bechdel Test, but it's not regular to have this many well drawn female characters in a Doctor Who story.

The central conceit of the story is clever, if somewhat borrowed from Douglas Adams. But instead of just making a sci-fi novel that features a character called the Doctor, Hinton straddles the line and has a Doctor Who story with some complicated science fiction elements. Of all the spin-off material I've been reading, this is the only book that seems to do everything.

I really liked this book. Hinton's prose is good, his sense of pacing fantastic, and his Fifth Doctor just flies off the page at you. For my first Missing Adventure, this worked out really well.
Posted by matthew.