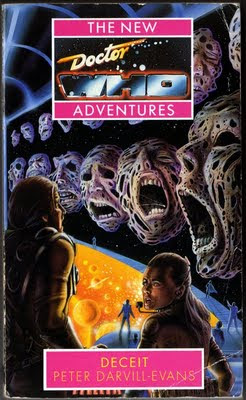 Peter Darvill-Evans was the editor of the New Adventures when he decided to wade in and produce a book conforming to the rules he himself set out for all of the writers. The result is Deceit, which features the return of Ace to the New Adventures, and ties up some lingering plot threads from the past five or six books.

The TARDIS is acting even more erratically and this is reflected in the Doctor’s behavior. Things are coming to a head with the TARDIS and Bernice is left helpless, stuck in the TARDIS’ constantly rearranging innards. Meanwhile, Ace has been fighting the Daleks across space in the 25th century, but when she stows on a ship heading for peaceful Arcadia, she finds that the 25th century’s corporations are hiding something big. At Arcadia, a giant satellite looms over the planet, a satellite with an asteroid belt in the shape of human faces, vibrating with the power of an intellect more vast and frightening than the Doctor has ever faced before.

Deceit should have been edited. This is an intentionally facetious statement because the editor in chief was the writer. He should have submitted his novel to a friend with a background in editing so that this friend could have told Darvill-Evans that his novel is too long and scenes stretch on to infinity. In keeping with the “new and improved” action-star Ace, there are a lot of gunfights and action scenes that just go on forever. As in, some action sequences last over thirty pages. The danger never feels real, possibly because of Ace’s participation, and it grows tedious as every scene begins to feel the same. Darvill-Evans will never be known for a great action writer, alas.

However, all is not lost. While the constant action wears the patience, the author manages to weave a decently complicated and exciting novel with some clever twists, and some clever mathematics. The central conceit of the novel is quite ingenious, sort of implicitly comparing the Seventh Doctor’s near-constant deceit with the villain’s. The villain has created a fake world for a very devious purpose and it doesn’t begin to come clear until the end of the second act. Of course, it’s frightfully obvious to the Doctor, and Darvill-Evans has fun with the cliché of the Doctor being persistently in the know.

Thankfully, the author writes a fun Doctor and well-drawn Bernice. This is a welcome change from The Pit, the previous New Adventures. Bernice’s outgoing and abrasive personality are a treat as usual, her verbal barbs always entertaining. The Doctor gets a few good lines as well, and as usual, when the end comes and the Doctor’s sleight of hand is revealed, it’s completely enthralling. I was chuckling and chortling as the book got closer and closer to endgame; I was relishing the moment of the reveal.

It’s not perfect, though. Like I said, it is in dire need of editing. The novel takes way too long to get going, trying to set up a bunch of plot threads that – in the end – don’t really matter. Just like in The Pit, the seeming randomness of the disparate threads never coalesces satisfactorily enough.

Plus, I’m not sure if I’m a huge fan of the new Ace. She’s lost a lot of her verbal tics (“Wicked”) and she’s not quite as engaging. There’s a strong sexual angle to her. This isn’t a problem for me; I’m thankful for sexually normal characters in fiction. What bothers me about the new sexually open Ace is that it feels like fan service. Who fans are predominantly male so this feels especially pandering. However, Ace seems more devious and manipulative than before, like she picked up a few tricks from the Doctor in her travels. This represents a good piece of opportunity. If the writers can pick up on Ace’s internal tension between her new tendencies for manipulation and her loathing of the Doctor’s frequent mindgames, then there are some great stories to be told. If this potentiality can be identified and used properly, however.

Overall, Deceit was a decent Doctor Who story. It’s technically speaking a well written novel, but it needs some tightening of the nuts and bolts. Also, I was often forcibly reminded a lot of Star Trek with Darvill-Evans’ word choices and plot threads. It’s too much like a Next Generation episode. It doesn’t help that the author refers to the military as Starfleet. But, as always, it’s fantastic to see the Seventh Doctor in action and he pulls off a rather good coup by the end – one that is properly set up like Chekhov’s gun.

Not the worst New Adventures novel but neither the best. Magnificently average to be honest. At least, this novel doesn’t stink of missed opportunity like The Pit.
Posted by matthew.