A long time ago, the only experience I had ever had with Doctor Who was the TV movie that aired on FOX in 1996. I was 11 years old at the time, but I still sort of remember it in a very hazy way. I recall not being able to make head or tails of it. I also recall preferring FOX's Generation X TV movie that aired around the same time. So, that being said, my only experience with the Eighth Doctor was my first. I've decided to take a wee break from Virgin's New Adventures to take a look at the first of 70-something books starring the Eighth Doctor. This one, written by Terrence Dicks, is called The Eight Doctors. 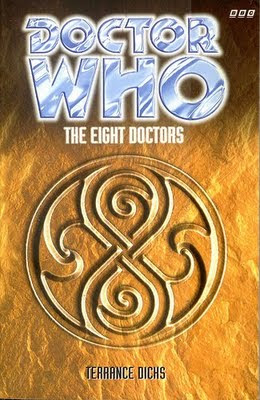 Immediately after defeating the Master in San Francisco, the Doctor climbs aboard his TARDIS, only to set off a final trap created by the Master: amnesia. The Doctor no longer knows who he is, nor does he understand why his TARDIS is traveling to the distant past, 10,000 BC, where he meets the First Doctor. Now all becomes clear: in order to regain his memory, the Doctor must visit every single incarnation of himself, even if it means causing great damage to his own timeline. However, a silent and unseen enemy is tracking him through time and space, waiting to strike when the moment is right.

Sounds fantastic, doesn't it? I should write the blurbs on the back of the books for a living. Anyway, let's dive in. I've already read a Dicks novel, so I shouldn't be surprised at the quality of prose contained within. It's no spoiler to say that the prose is limp and at a few odd times, dismal. However, Dicks knows how to plot a riproaring adventure.

And this is certainly an adventure across time and space. However, the Doctor Who nerd in me is crying out at certain irregularities in Time Lord rules. Crossing his own timestream results in all sorts of odd side effects, like a convenient time bubble allowing the Doctors to telepathically share their memories. It seems that Dicks avoids continuity regarding time travel for the sake of his plot.

Which is odd considering how much of a wank this is for continuity. Every time Eight visits one of his previous selves, they're right in the middle of a famous adventure. For example, the Second Doctor is in the midst of the War Games, his most epic and final story. And the Fifth Doctor has just come away from the Game of Rassilon (aka The Five Doctors). Everything is rooted deep in Doctor Who history. It's not terrible. It's not like Dicks hasn't had a chance to write every single incarnation of the Doctor.

For most of the book, Dicks sweeps us from one adventure to the next, with slamming whiz bang awe at every scene. It's not until Eight meets Six that things take a turn for the worse. In fact, the incredibly long and twisty scenes with Six are so terrible that I thought about giving up the book. They're set at the end of the Trial of a Time Lord, not Who's greatest hour. I've mentioned before that I found the whole Gallifryan political stuff to be tedious. Now imagine two Doctors meddling with politics and trying to get somebody else elected so they can alter the outcome of the trial. Ugh. It's boring. Utterly boring. And there's so many little diversions and digressions in this long digressive scene, like when Eight goes to a rough and tumble dive bar and recruits some rebel fighter to help him achieve some weird goal. Again, like I say, it's fucking boring.

For the most part, the book is rather lively and quick, as easy a read as there'll ever be. Dicks is a great plotter, but not the world's strongest prose stylist. His skills with dialogue are decent to say the least. Anyway. This book is okay. A solidly mediocre beginning to the Eighth Doctor Adventures. I'm aware that the books wildly vary in quality, so there's sure to be some good ones and sure to be some real stinkers. Here's hoping though.
Posted by matthew.