Publisher's Weekly has a brief and superficial interview with Bret Easton Ellis about his 1991 novel American Psycho turning 20 years old this week. First of all, Jesus Christ - has it really been 20 years? That makes me feel old. Secondly, this interview, which you can read here, has all of the hallmarks of Ellis' darty and mercurial interviewee presence. 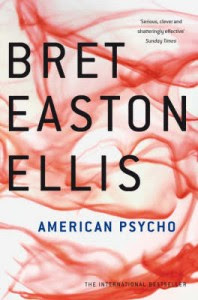 When asked if Patrick Bateman was a prescient character, predicting the metrosexual craze or a symbol of the future zeitgeist, Ellis makes some rather intriguing comments on the origin of American Psycho. Here are his thoughts, in true vague Ellisian fashion:

Whenever I am asked to talk American Psycho, I have to remember why I was writing it at the time and what it meant to me. A lot of it had to do with my frustration with having to become an adult and what it meant to be an adult male in American society. I didn't want to be one, because all it was about was status. Consumerist success was really the embodiment of what it meant to be a cool guy—money, trophy girlfriends, nice clothes, and cool cars. It all seemed extremely shallow to me. Yet at the same time you have an urge to conform. You want to be part of the group. You don't want to be shunned. So when I was writing that book as a young man, I was having this battle with conforming to what was then yuppiedom—the yuppie lifestyle—going to restaurants and trying to fit in.

This is interesting and somehow in contradiction to previous origin stories about American Psycho. Previously, we've been told that Bateman represents Ellis' father and that American Psycho is Ellis' loathing of his father's world. While this interpretation is attractive, a possible bridging of the two might even be better. Perhaps Bateman is Ellis' own self-loathing, his desire to fit in, considering he was the breakout star of his college that no doubt ostracized many of his LA peers. But it's also self-loathing at how attractive and sinking the yuppie lifestyle can be.

Of course, the interview doesn't go anywhere near this. Ellis provides more answers than the minimalist questions require. However, the interview disintegrates into a celebration of Bateman's ubiquity, rather than an exploration of why Bateman remains popular. It's not enough to say that Bateman presaged metrosexuality; why exactly are we celebrating 20 years of cultural relevance? Why is Bateman still so popular - in an ironic way and in a literal way?

The interview is supposed to be about the book's 20 year anniversary, so it doesn't really touch on the film adaptation, but I suspect the true answer is there. American Psycho's resistance to obscurity is due to the film, and mostly to Christian Bale's bravura performance as Bateman. Without this film, the controversy surrounding the book would have diminished, and the book would only be remembered as that violent misogynistic satire from that one writer.

I don't think this minimizes the book's impact by saying this. Even in the interview, Ellis recognizes that in our current society, controversy lasts only so long due to the speed of information. I can't decide whether it's the interview's fault or Ellis' for not acknowledging the film's contribution to the book's lasting appeal. Regardless, the book is as close to as masterpiece as Ellis will ever write. I don't think I'm going to re-read it anytime soon, though. I'm very nervous that the book won't hold up. But maybe it's time to give it a go. It has been almost ten years since I've read it.
Posted by matthew.