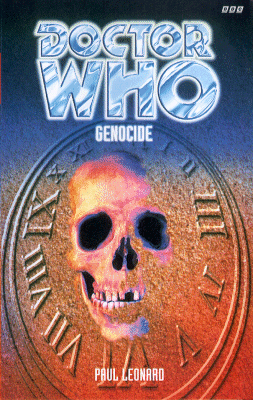 I thought the last EDA was okay. That meant that three out of three EDAs were just okay. I’m hoping for an improvement of some sorts, or else I’m going to get discouraged and move on to something else. I tried with the fourth EDA, called Genocide by Paul Leonard.

The Doctor and Sam have arrived on Earth in 2108, but it seems vastly different. Instead of humans occupying the world, it’s a species called the Tractites, a peaceful race that have been living on Earth for hundreds of generations. It seems somebody has been messing with the timestream, so the Doctor and Sam travel to the prehistoric era in an attempt to figure things out. The problem is that reverting the timestream back to the human-occupied one will result in the destruction of all of the Tractites. The Doctor must choose: genocide for one species or genocide for the other.

One of the best parts about Doctor Who is that the Doctor is always playing four dimensional chess. The best stories are the one that capitalize on this aspect and deliver a clever time travel story. In Genocide, we finally have an Eighth Doctor Adventure that uses the TARDIS and uses time travel. I’m actually reminded a lot of Michael Swanwick’s The Bones of the Earth, a novel that I liked but didn’t love. In that novel, time is being changed and things progress in a decidedly non-linear aspect. The same thing is happening here. We follow the character back and forth through time as they try to unravel the mystery.

When the Doctor and Sam are separated by millions of years, the Doctor does the clever thing and leaves messages for the future, for Sam. It’s things like this that make me want to read Doctor Who. Plus, the big twist at the end, which is extremely subtle and not presented as a twist at all, features a very clever timey-wimey solution. The end result is actually at the beginning, but the reader doesn’t know that. Part of what makes this work is the sheer subtlety, something I would never expect of an Eighth Doctor Adventure.

Beyond the timey-wimey stuff, is there anything else worthwhile in this book? Well, sort of. Jo Grant, the Third Doctor’s companion, makes an appearance, but she’s some sort of crazed daffy butt-in-ski. It’s kind of weird. I’ve only ever seen one serial with Jo and she didn’t really strike me as being interesting, but I’m sure she has her fans.

There’s a lot of ethical hand-wringing as you can tell from the synopsis. Sam, the uber-Nineties gal, has a lot of problems with the potentiality of removing humanity from existence. But by the end of the book, she’s doing some fairly unethical things herself. That makes her a hypocrite, kids. With all this philosophizing you’d expect some sort of complexity in the ethics. Unfortunately not. It’s too much to expect a Doctor Who story to be subtle and morally ambiguous. The solution to the problem is apparent to the Doctor from the beginning: there is no future for the Tractites, no matter how awesome they are. Their continued existence has dire repercussions for all of the space-time continuum. It’s either a few billion Tractites or the existence of everybody and everything from the beginning of time to the end. Ummm, that’s not a hard question, is it?

Regardless, the novel’s fairly entertaining and engaging. There’s some exciting bits and some characters get killed a lot earlier than I expected so that was surprising (and satisfying: they were annoying). Leonard’s prose is workmanlike but gets across the imagery of prehistoric Africa.

I’m thankful that I’ve finally read an Eighth Doctor Adventure that I liked, even if it was only for its time travel stuff. Hopefully the sketchy beginnings of the series will even out and we can get on with enjoying Doctor Who.
Posted by matthew.