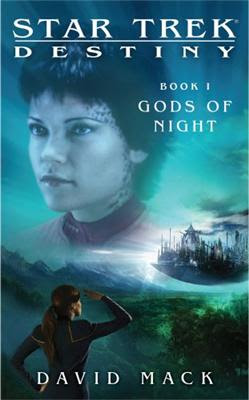 I suppose it was only a matter of time before I turned to even nerdier pursuits. I’ve always been a fan of both Star Wars and Star Trek; I’ve never understood the apparent mutual exclusivity of the two fandoms. I’ve always preferred Star Wars, however, if only because there’s less of it, and once you’ve seen ten Star Trek episodes, you’ve pretty much seen them all. However, I hold a special place in my heart for the Next Generation and subsequently, the Borg. In addition, Voyager and their frequent clashes with the Borg have always interested me. On Goodreads, I stumbled across this Star Trek trilogy, which features the Borg, and once I had acquired an ebook version of it, I decided to give it a try. I welcome you now into a new phase of my nerdiness: I read a Star Trek book.

Gods of Night follows four starship captains across time and space: Picard on the Enterprise, Riker on the Titan, Ezri Dax on the Aventine, and in the past, Hernandez of the Columbia. In the present, the three captains are in search of something, anything, to explain why the Borg have suddenly changed their tactics from assimilation to genocide. The attacks in Federation space are increasing in number and in brutality. In the past, the Columbia, a ship that mysteriously disappeared, encounters a strange new alien race, one with awesome and frightening technology. It is only a matter of time (and space) before the Borg reach the core planet systems and destroy everything.

There’s a few things about Star Trek that I want to get off my chest right away before diving into this book. First of all, for a utopian society, there are no obvious gay characters in this entire book. Nor can I remember any gay characters from what little I’ve seen of the shows. Sexuality, like gender in Star Trek, appears to be monochromatic. In the thousands of species they’ve encountered and featured, it appears that there are only two genders, or a lack of gender. Same with sexuality: there are straight characters and there are asexual characters. This bothers me. I live in the 21st century, where people are straight, gay, pansexual, and asexual, and many people blur distinctions between genders, thanks to personal beliefs and science. What’s their excuse in the 24th century? A lack of reality, I suppose. Or perhaps, since Star Trek seems to attract straight white males (ie me), any ambiguity of sexuality is alien and therefore frightening. I shouldn’t really come up with hypotheses without any data, but there you have it. It’s just that this apparent lack of flavor is so obvious.

Something specific about this book is the author and the editor’s desire to include an example of any and all species they can come up that are serving in Starfleet. There’s a dog guy, a low gravity girl, a Vulcan, a Klingon, a bunch of mixed-species characters (which strikes me as especially unrealistic), and even an aquatic character with a breathing apparatus (there’s no fucking way that somebody who doesn’t breathe air would serve in a military organization. They would be a huge liability in any real crisis or combat situation. Any accident would cause them to be a casualty and the officers would have to worry about them at all time. Rant over). If the editors and author want to show how inclusive Starfleet is, I have to ask – where are the goddamn gay characters?

The other thing I want to talk about in terms of Star Trek is the apparent lack of relativistic effects. If the galaxy they live in is the same galaxy we live in, that means there’s a difference in time between one planet on one edge and the other. Time would flow differently for them. How in the world would you ever be able to communicate with them? Also, I’ve yet to see any explanation for how the warp drives manage to supersede relativistic effects, such as time dilation, or even the physical change in things as they approach the speed of light. It seems there’s a lot of “hand-waving” involved with scientific explanations. In one case of an apparent logistical problem, one character actually waves away the problem with her hand, coming up with some technobabble that’s supposed to mollify the reader: multiphasic mumbojumbo. Whatever. I don’t read or watch Star Trek to learn about science. I consume Star Trek to be entertained. So let’s finally talk about Gods of Night and see if it did such a thing.

In a word – yes. This was a gripping read. I read this entire 400 page book in two sittings, in less than twelve hours. The writer does a remarkable job of keeping all the balls in the air, and slowly but inexorably, drawing the threads together in an intriguing manner. The overall feeling I got from the book was a well-oiled and extremely efficient machine. Every single element of the book was working in perfect unison to a goal of – in the case of the first book – a cliffhanger that I sort of kind of saw coming, but was still awesome. I had no idea that time travel was going to play such a huge role in this book and I was pleasantly surprised.

On the large scale, the plotting is very well done, very tight. I was nervous at first because I only wanted to follow Picard on the Enterprise and I was going to have to deal with flashbacks to a ship I’ve never heard of, but I was startled to find that the flashbacks are the most engaging part of the whole novel. In fact, it’s in the past where the most exciting and suspenseful setpiece happens. That’s not to say that the other parts are boring – far from it. Mack jumps the reader from captain to captain, from ship to ship, with a light touch and an extremely subtle use of the cliffhanger. Each chapter ends like you’d expect a chapter in a thriller to end. However, the reader’s mind doesn’t produce a cloister bell of drama or a dun-dun-dun soundtrack thanks to Mack’s light touch. The danger is palpable, but never stomping on your feet to direct your attention to it.

In terms of small technical details, David Mack has a fairly strong hold of his narrative. The fan uninitiated into the extended universe of Star Trek won’t be entirely lost; Mack spends some time detailing recent literary adventures starring the cast, but makes it seem like it’s actually part of the characters’ history, rather than “remember that time we did this?”. The downside to this is the cast’s finely-tuned memory: Riker recalls something and instead of saying “a decade ago” he says “twelve years ago”. That seems unrealistic for somebody to a) remember so well considering how many goddamn adventures they have and b) actually say it out loud. Despite this small quibble, Mack integrates Trek TV and Trek books well enough, or at least for somebody like myself who stopped watching a decade ago (or twelve years ago hahaha).

Mack seems to have a good handle on the different characters’ voices. His Worf sounds exactly how I remember Worf sounding and the same goes for the rest of the bunch. The cast that is new to me, well, I have to say, Mack does a fine job of making them seem real and interesting (except for the aquatic character which just pissed me off). A lot of them have personalities and history and have likes and dislikes, or at least enough to make them seem like something other than “redshirts”.

However, all is not perfect. There are a couple problems, other than the exclusion of gays and relativistic effects. Mack doesn’t seem to have enough faith in the reader. His dialogue is good, and it’s rare that writers like this use sarcasm, or nuanced speech. Mack does so, but then makes the mistake of pointing it out to the reader. A character won’t just say something sarcastic – the narrator will describe it helpfully: “Example speech,” he said with an edge of sarcasm. Yes, we know, Mack. We’re not stupid. We can parse meaning from context. There’s a scene near the end of the book where an XO makes a joke in a tense situation, and then says, “Tough room” because nobody laughed. Now this could work really well, but Mack goes to the trouble of pointing out how tense everybody is and how they could never laugh in a situation like this. Why, Mack? Why? You ruined a perfectly good joke by explaining it – that’s like the cardinal rule of comedy.

The other problem is something that I can only assume is editorially mandated: Riker and Troi. Now, I have to admit critical bias here – Troi has always been the most and I mean the most uninteresting character in the history of fiction that I’ve ever encountered. Other than Kate from Lost. The subplot running through the Titan’s storythread is that Troi and Riker are experiencing problems carrying a child to term; the fetus miscarries. Maybe Mack has a plan for this storythread, but all it is doing is creating a feel of artificial drama. It’s a soap opera, essentially. And it feels so out of place in an otherwise tightly plotted epic-scaled saga. I get the sense that this is an arc being followed from the Titan’s literary adventures that Mack probably has to climax for maximum drama. It feels forced.

Other than this, the novel is pretty damn good. Far better than I expected it to be. Normally, the prose in things like this is execrable or woefully incompetent, but this is not the case. In fact, I’d have to say that this is better written than most “airport” thrillers I’ve read.

I want to be careful with these next comments, because I’m not entirely sure where I stand on the issue. It pains me, and sort of embarrasses me that I’m reading a Star Trek novel. But I cannot deny that I was wholly entertained and I’m excited to read the next one. It’s a shame that there is a stigma attached to reading extended universe fiction, because a good book is still a good book, regardless of inspiration. On the other hand, it’s somewhat disheartening that a writer of talent like Mack isn’t out exploring his own imagination instead of mining someone else’s work. So I can’t say definitively where I stand on this. I’m reading Doctor Who novels because for a time, there was only Doctor Who novels. The Star Trek brand is in the same place right now – the books are the only methods of enjoying new adventures.

There’s 1800 words about a Star Trek novel. Good lord, I need a hobby.
Posted by matthew.

I love David Mack stories and thank you soo much for sharing this.