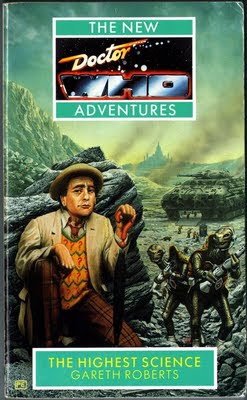 The Highest Science is - so far - the funniest New Adventure I've read. The Doctor is exceedingly well written and his dialogue actually made me laugh out loud. Here's a pitch-perfect sample of the Doctor in action:

Before he could reach the hatch, there was a sharp crack and it slid slowly open.
The Doctor raised his hat. ‘Hello, I’m the Doc–’ he began.
An enormous bald headed woman dressed in battle fatigues emerged. She carried an enormous weapon.
The Doctor turned. ‘Not today, thank you.’
The woman sprang forward. She turned the rifle on its side and clubbed him down brutally with the butt.

Hilarious. The whole book is like this. It's written by Gareth Roberts, who would go on to write for the new era, and he displays a remarkably light and deft hand with comedy.

In The Highest Science, the Doctor and Bernice are travelling to this remote planet in search of a temporal problem that causes coincidences to pile up. They reach what seems like Sakkrat, the mythical and legendary planet where an ancient race created what is called The Highest Science, a secret so deadly and so dangerous that the whole world is set up with traps and guardians to dissuade villains from trying to steal the secret. Unfortunately, the temporal problem has brought random people from random time periods to Sakkrat, including the militaristic Chelonians and a group of useless humans from the 20th century. On top of this, the 25th century's greatest and most villainous man has come to discover and steal the Highest Science for himself. Will the Doctor be able to stop him?

Hahaha, of course. What a dumb question. The Highest Science sort of reminds me a lot of Gatiss' Nightshade, in that it's a wholly classic Doctor Who style story, but the way the material is handled elevates the book beyond its genre trappings. Roberts writes a humorous and fast-paced adventure that finds the Doctor engaged with men in rubber suits (or at least that's how they would be if the Chelonians were ever on the show) and terrible secrets from eons ago, which turns out to be something unexpected (except to the Doctor, who of course, is as clever as always).

Of course, the novel is exceedingly entertaining. I found myself almost sad to have finished it, but I couldn't stop myself from doing such a thing. The end is exciting and exhilarating and of course, features just fantastic bits of dialogue. A giant creature made up of other creatures seems to only attack the Doctor and he protests by saying, "Why me? I'm the only one wearing a tie!" Just utterly fantastic.

It's also nice to see Bernice get a bit more screen time than previously. This is the third book I've read with her in it, and she's slowly being sketched out. She's extremely clever and quite quick to call the Doctor out on his bullshit, but she still likes him in a way. It reminds me a little of Martha Jones' relationship with the Doctor, but minus all of the simpering romantic notions. I liked how Martha was the Doctor's equal - Bernice is very similar. It's always better to have engaging companions that can hold their own, probably a reason why I like Ace so much in the New Adventures.

The Highest Science was a fantastic read. I was delighted to read it and I can't wait to read more Roberts novels. But, next up is more New Adventures. Allons-y.
Posted by matthew.