I hated the last book. Hated it. Forced myself to read it. Would that be the book that breaks this Doctor Who streak? Well no. I found out that Mark Gatiss and Paul Cornell wrote the next too, so I had to give them a chance. Both Gatiss and Cornell ended up writing for the new series. Whereas Cornell's episodes are among my favourite, Gatiss' episodes tend to be throwbacks and often satisfactory. Would his novel be any good? 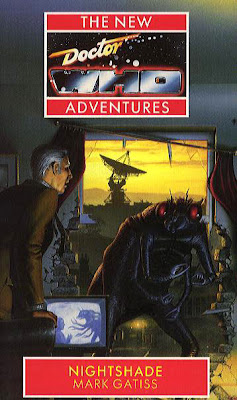 The Doctor is weary. He takes Ace and the TARDIS to a small village in Northern England so that he can contemplate retiring, settling down for a few hundred years and just trying to live a normal life. Ace is distracted by falling in love with a boy named Robin, so she's barely paying attention. Too bad though. They should be. There are strange things afoot in this village, like the ghosts of loved ones coming back to kill people, like the creatures from an old sci-fi TV serial coming back to kill the retired lead actor, like the strange numbers on the readouts at the new astronomy facility.

This is a classic Doctor Who story, and by that I mean the setup is old and tired. This should be a problem, but thank heavens it's not. The plot itself contains no surprises and no twists. It's simply an old TV serial where the Doctor and the companion are a little slow to figure things out and then when they do there's a lot of running in corridors. The monsters are even men in rubber suits, or at least that is their inspiration. But somehow, thanks to Gatiss' skillful and light hand, and some subtle metafiction, the story is elevated from old creaky plot to something amazing and transcendent.

It's Doctor Who at is purest. There's an historical section with real history, there's horror elements like monsters stalking you in the rain, there's some technobabble related to pulsars and quasars, and even some very clever (and subtle) time travel elements. All of the best parts of Doctor Who distilled into one breakneck paced novel.

I loved this book as much as I hated the last book. Gatiss' prose is perfectly fine and gets everything across. I found that I could enjoy sentences and savour them. This is a rarity with the New Adventures line. Only Cornell and Cartmel have prose this fine (even then, Cornell's prose was a little loopy for a bit). But mostly Gatiss' skill is creating a superb secondary cast.

The scientists at the laboratory are exceedingly well written (except for the stereotypical racist in the group) and even a handful of the villagers are given lives beyond the expendable nature of a secondary cast in a Doctor Who story. It helps that their memories are made into physical manifestations. Gatiss uses the same trick over and over but to positive results: he introduces a character, gives some backstory, and then brings in the ghosts from the memory. It works perfectly well. These characters shimmer with reality, something very very very rare in books and stories like this.

And when you have real characters running amok, the emotions tend to be real too. The love story of Robin and Ace is destined to end poorly, but there's hope in the reader that maybe Robin might be a new companion. Although, we all know how it ends. It's just the details that surprise us. The same with some of the other characters. You have an idea of where they'll end up, but Gatiss takes a different or esoteric root to get them there, and it's positively surprising and well done.

Every cog and gear in this book is running at optimal levels. Everything moves perfectly. The suspenseful parts are terrific, the heartrending moments are perfectly breaking, and the time travel stuff is just immaculate without being too showy. I really loved this book. I can't wait to continue with this highly nerdy project. The pace might slow down a bit, though. Eight books in nine days is hard to keep up with. Wish me luck.
Posted by matthew.