[Can this be? Content not related to Doctor Who? Why yes. Read on] 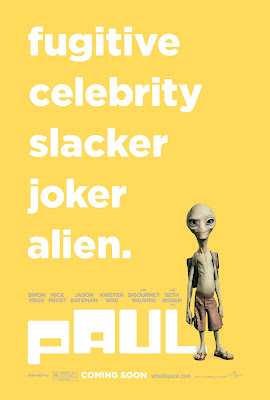 Simon Pegg. Nick Frost. Both names are synonymous with nerdy but smart humour. Both of them respected comedians and respected nerds. They wrote a movie. The guy who directed Superbad filmed it for them. They starred in it. What's it all about?

Pegg and Frost are vacationing in America for the Comic Con and afterwards, take a road trip to Roswell. Along the way, they pick up a fugitive alien by the name of Paul. He's a potsmoking cool dude who swears a lot. So we knows he's super cool cause only cool people swear. Anyway, they pick up ultra religious Kristen Wiig who drops her fervor when the plot requires it. They're being chased by Jason Bateman, a super dickish FBI agent who we know is a dick cause he never takes off his sunglasses and he speaks sharply. So yeah that's the movie.

The story's lazy. Really lazy. There's a scene in which Paul heals a dead bird and you just fucking know that this healing thing is going to make an appearance in the climax. It's like movie math. Well, actually, it's called Chekhov's rule: if you have a loaded gun in the first act, make sure it's fired in the third. This is what I mean by laziness. The uptight nerds learn some valuable life lessons about letting loose and standing up for each other and whatnot by the end of the movie. Paul teaches them to be cool dudes and listen to ELO and smoke pot.

But is it funny? Man, I don't know. I laughed a few times. Then I got over it. The gags are for the most part forgettable. It all depends on how much of Seth Rogen's voice you can handle. For me, the answer is very little. I don't find him funny at all, and he's playing the title character, so take that into account. His weird smug cadence never changes and he just talks constantly. Saying random things in your own voice does not equate to a joke, Seth Rogen, just so you know.

There are some funny cameos and a fairly sweet action scene near the end of the movie that involves a car chase. But on the whole, it's entirely forgettable. The story is lazy, the gags are lazy, but the cast is pretty good. Like usual, the highlight of the entire movie is Wiig. Her character's attempt at swearing is wholly hilarious and no doubt improvised. She's funny.

Email ThisBlogThis!Share to TwitterShare to FacebookShare to Pinterest
Labels: movies