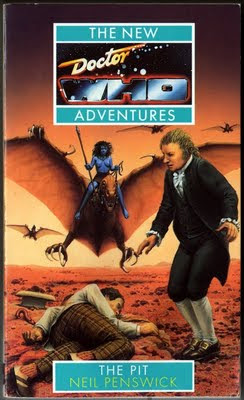 This book is regarded as one of the worst New Adventures books. It's not hard to see why. Here's an example of Penswick's flat, expository style that simply announces itself to the reader without any lightness or awareness:

‘Brown?’ the antique dealer asked.
‘Yes, Mr Mann.’
‘Can I speak?’
‘Yes, it isn’t an open line. Our conversation will be electronically scrambled.’
‘I was phoning to thank you for getting me out of police headquarters.’
‘Yes,’ replied Brown.
‘I think General Kopyion knows.’
‘Knows what?’
‘About the conspiracy,’ Mann said.
‘I realize that charade of tearing your shop apart was to discover if you had “friends”. But we’re both suspects. Me, a known Freedom Party sympathiser and you, a black marketeer.’

Indeed. Notice how I haven't given any context. You can certainly parse the meaning of the scene from this little snippet. What you cannot do is imagine any two people in the world speaking to each other in this flat way. If there is another writer who is less skillful with dialogue than Neil Penswick, I'd prefer not to read them.

It's a shame because there is an interesting plot buried somewhere under the egregiously poor characterization and the dismal prose. Within this plot is an intriguing mystery....

Another element of this book that forces the reader to avoid being entertained is Penswick's adoration for 20th century allusions. He makes no effort to populate his future history with any culture or reality. Characters listen to Leonard Cohen, talk about movies and make historical references to Ancient Egypt. Plus, when they use idioms, in that rare case, they use obviously English idioms from the 20th century. There's no illusion that this book was written in England, in the 90's. I kept expecting some sort of Thatcher reference. An alien race, subjugated by the future humans, sees a machine and mentally compares it to a typewriter with a QWERTY keyboard. The list goes on.

On top of the above complaints, the mood of the book is oppressively dour. I don't expect every Who story to have moments of levity, but the Doctor is sort of a light character. But every sentence and every paragraph just sags under the weight of depression and moodiness. It's all very exhausting. This is also the kind of book where a character punches something to show the reader that he's flipping mad. This happens a lot, unfortunately.

It's a shame because the plotting is decent. The overall story is complicated, confusing and convoluted. It's excellent. But you're going to have to wade through all of the above bullshit to get at it. The mystery at the core of the story is not perfect, not at all - there are some dangling bits left at the end, plus some wholly superfluous characters and plotlines. But, once you get to the end, Penswick manages to sell the feel of impending doom and unbelievably high stakes. It just falls flat because of everything else.

Specifically speaking about the superfluous characters, one of them is the poet and artist William Blake, randomly picked up from his time and deposited in this Hell. I have absolutely no fucking idea why the author chose Blake or even anybody for this part in the book. You could have put literally anybody in this part and they would have done the same job: ask questions of the Doctor and receive enigmatic and irritating answers.

The Doctor and Bernice are - in a word - unrecognizable. I can't say that this is a Who story in name only, because the central reveal hinges on a crucial part of Gallifreyean history. However, Bernice isn't anywhere as interesting as the previous book and the Doctor behaves extremely erratically, and I don't mean in the sense of the series-long arc of his erratic behaviour. I mean that the Doctor bows down to a Time Lord we've never heard of. Bows down? This is not the Doctor. He doesn't bow to anything. Period.

I disliked this book, but I didn't hate it. There's a tragic missed opportunity here. If the book had been written by somebody who could actually write, then we would have had a classic on our hands. Alas, it's not to be. The Pit is bad. Not as bad as Witchmark which was dully plotted and horribly written, but it's fucking bad.
Posted by matthew.