"Oh god! When will this blog talk about anything other than Doctor Who? I mean, it's been over a week and it's all fucking Doctor Who this and Doctor Who that. Come on!"

Okay, I understand. It's been a little crazy around these parts lately, what with all of that British TV hero called the Doctor. I admit it. I'm a little obsessed. I just finished watching the first part of the sixth series, and it was exciting, so I need to keep going. I need to get my fix. I decided to watch a random Seventh Doctor serial, considering I've been immersing myself with him in the books. I went with Remembrance of the Daleks, and here's what I thought. 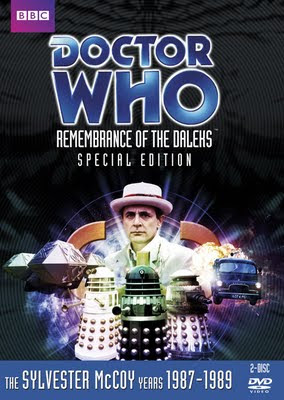 The Doctor and Ace find themselves in London, 1963. Or rather, the Doctor has brought them here. They find a mysterious van with a physicist monitoring a school. Then they find the military attacking a lone Dalek, who the Doctor kills quite easily with some of Ace's explosives. The Doctor realizes that there is a game afoot, a war brewing between two rival Dalek factions over the mysterious Hand of Omega. The Daleks have chased the Doctor across time and space to find this device and they'll stop at nothing to get it, including killing each other.

One of the major problems with classic Doctor Who is the pacing. Since I was born in the Eighties and grew up in a time of increasing shorter attention span, television and movies have opted to go faster and faster. I'm used to things that move quickly. Classic Who serials do not generally fall into this category. They're slower than what we're used to. Except for this serial. Remembrance of the Daleks might end up being the fastest Who serial I've ever watched. The first part just zings by and leaves you on a cliffhanger that no doubt blew minds back in the day: stairs are no longer an obstacle for Daleks.

This whole serial, while still couched in the classic elements of running down corridors, still has some fantastic setpieces, and some very clever misdirection. It's no shock to say that Davros makes his appearance in this serial, but where and when is left to a surprise. There's also elements of the Who lore that get its beginning in this serial.

This is the one where the Doctor obliterates Skaro. This is essentially the moment where the Doctor becomes "the Destroyer of Worlds" and one of the biggest threats in the Universe. A manipulative, deceiving, calculating Doctor is possibly the scariest one. There's a reason why I love the Seventh Doctor so much. Sylvester McCoy's portrayal is equal parts sinister, fumbling and Shakespearean and it succeeds on all levels. While the Tenth Doctor will remain my favourite for years, the Seventh is sneaking up and stealing the show very quietly, just like he would.

Here's an amazing mindblowing moment: the Doctor and Ace find a transporter device in the basement of the school. While a Dalek is materializing, the Doctor messes with the device and causes half of the Dalek to materialize where the other half is, thus destroying him. Shit, son! That's fucking cold blood. It's pretty rare to see the Doctor just up and kill something. That's how badass this Doctor is.

Something to mention about this serial though: it's incredibly violent. There are scenes in which Ace is running around with a missile launcher and blowing up Daleks like it ain't no thang. In fact, for one of the most scary monsters in Who history, the Daleks are pretty easy targets in this one. They're dying left right and centre. I've never seen them so easy to kill in Who. (The modern era does a bit of a better job making them scarier by making them fairly indestructible.) This is a facetious complaint because without all this violence, we wouldn't have the most violent Who serial I've ever seen. Tons of Daleks are blown up and quite a few people get their innards scrambled! There's a also a space shuttle that lands randomly in the middle of a schoolyard and the special effects don't look that terrible. Some of them are pretty awesome. The makeup on Davros is quite good too.

If there's a problem with this serial, it's that there's no emotional connection. Ace kind of likes this one cute military boy, but then he betrays them by giving info to a random National Socialist who's in league with the Renegade Daleks. Ace gets all emo about it, but there's no real catharsis. At this point, the actress playing Ace isn't the world's greatest, so it's not wholly convincing. Plus, in 1963, women physicists employed by the military? Don't make me laugh. That'd never happen.

Otherwise, this is a fucking awesome serial, full of violence, Doctor-manipulation and deception, fun times, and a killer ending that proves to be an essential part of the rest of Who history. I love Doctor Who, man. Love it.
Posted by matthew.

Email ThisBlogThis!Share to TwitterShare to FacebookShare to Pinterest
Labels: doctor who, random classic doctor who