[Note, I'm no longer going to call this posts "Random Classic Doctor Who Reviews" because I'm going to reviewing more of them more frequently, thanks to the current series' four month break. That being said, I will still use the tag for these reviews. Just mentally substitute the tag "random classic doctor who" for "classic era doctor who"] 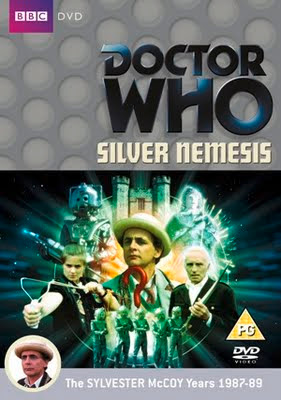 Thanks to the Virgin books, I'm still greatly interested in the Seventh Doctor. I decided to pick one of the three remaining serials from series 25 (of which I watched the Daleks episode) and just go with it. Here's what I thought about Silver Nemesis.

An asteroid with an orbit that circles the planet every 25 years has finally fell to Earth. Greeting it are a gang of Neo-Nazis, a time-travelling sorceress from the 17th century, and a "away team" of Cybermen. It seems something of great value is inside that asteroid, something the Doctor wanted off Earth on purpose. 300 years after he shot the rocket in space, it has come back and now the Doctor has to deal with it all over again.

There's two amazing scenes to discuss in this serial before getting to the meat of my review. The first one is the scene in which a lady and her servant, both dressed in 17th century garb, try to hitchhike by literally sticking out their thumbs. The ridiculousness of this scene is exquisite, a word I don't often use. This time-travelling sorceress and her servant are hopelessly lost until a boorish American stereotype drives by in a limousin. It's hilarious. Plus, it's smack dab in the middle of an intense scene in which Ace thinks she's about to get some answers. But more on that in a second.

The other scene worth talking about is the one in which the Doctor is doing some sort of Doctor-y thing with knobs and gizmos while Ace single-handedly takes on an entire platoon of Cybermen, armed with only a slingshot and some gold coins. Three of them corner Ace, and she's only got one coin left. The Cybermen tell her to surrender, but then she asks which one wants to die. It's fucking badass and there's a reason why Ace is my favourite of the classic companions. The only female companion to like bombs and to kick serious ass (Leela doesn't count as an asskicker).

So, to the review then. Well, in short... I fucking loved this serial. It's incredibly complicated and so goddamn modern. I can't believe this is a classic serial. It's more convoluted than most of the Russel T Davies era. The time travel stuff is utterly confusing and the chronology that you have to keep straight in your head is intentionally obfuscating. It's all part of the masterplan of making the Doctor seem scary and dark. And it totally works. Not only does the Doctor play metaphorical chess across time and space, but he keeps going back to 1638 and playing literal chess with an unseen and mysterious opponent. It's a small running gag that plays throughout the episode and it pays off handsomely at the end when the Doctor reveals that the time-travelling sorceress was his pawn all along and not the other way around. He's playing chess across time! How fucking cool is that?

That's not all there is to like in this serial. It's tremendously exciting and there's a big shootout between Nazis and Cybermen with a crazy lady flying arrows into the battle at the same time. There's also double-crosses, a rare triple-cross by the Doctor and the aforementioned scene in which Ace is the world's coolest companion. Did I mention it's convoluted and awesome?

All the answers aren't forthcoming either, something very rare in stories nowadays. The audience is still left in the dark about a few things, like how did the Nazis know about the asteroid, how did the Doctor plan this out so perfectly and how the hell did that crazy lady figure out time travel from an asteroid of liquid metal? Part of the charm of this serial is how little is explained to the audience. We know, thanks to Ace, that the whole thing was a ruse for the Doctor to eliminate the Cybermen's fleet (something that eventually resonates with the Tenth Doctor's era). But we don't know a whole bunch of other stuff and you know what? That's okay. In fact, that's frigging great. Why can't more serials be like this?

I really liked this serial. Not only because both the Doctor and Ace were totally badass, but because it's well written and riveting. This was entirely exciting and this is exactly why I'm so goddamn obsessed with the Doctor! How could you not be?
Posted by matthew.

Email ThisBlogThis!Share to TwitterShare to FacebookShare to Pinterest
Labels: doctor who, random classic doctor who