The third book. Often considered the worst. I read these three books in less than 24 hours. That can tell you something about them: either they're gripping reads, or they're just tremendously easy reads. Let's do this. 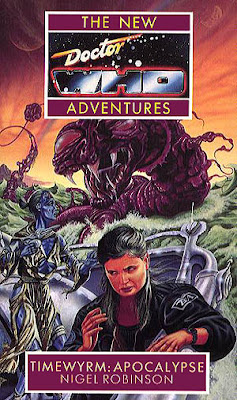 Chasing the Timewyrm has led the Doctor and Ace to the end of the Universe, where a planet with schizophrenic weather patterns is home to a perfect and beautiful race of humanoids, all of their needs and wants met by a mysterious benefactor race who hide in the shadows. Immediately, both the Doctor and Ace become suspicious and it is only a matter of time before they figure out why they were brought here, what lives in the shadows, and what the Timewyrm's plan is all along.

One of the more frustrating things about fiction is when something is painfully obvious to the audience but opaque to the cast. The effect is summarized perfectly in the film Scream, when Jamie Kennedy is yelling at the TV, a scene in which Jamie Lee Curtis is being stalked by the killer. Kennedy screams for Curtis to look behind her, which is ironic considering the Ghostface killer is right behind him. This is exactly what's happening in this third New Adventure. All the time I was rolling my eyes wondering when the good Doctor would catch up.

It's not like he hasn't seen this adventure before: the mysterious benefactor race with an ulterior sinister motive and the passive and complacent race benefiting. It's a classic Who setup and it's pulled off without a hitch. All the cogs and gears move effortlessly, just like they would in the show. But that's exactly the problem: it's a machine without any life or excitement. I was waiting for a complication or a wrinkle in time that would elevate this story from bland Who serial to something grander and more epic. This moment never came.

Even one little timey-wimey aspect of the plot is given short shrift. The Second Doctor makes an hallucinatory appearance to reveal something crucial to the plot that's maddeningly apparent to the audience. This small bit of real 4 dimensional thinking last only a couple pages and really doesn't succeed in its aim: to make the Timewyrm seem even more dangerous.

If the Timewyrm truly did have mastery of time and space, then it would be a God. Why does it keep resorting to such provincial and smalltime schemes? That's the epic question faced by the audience after three books of this. I wonder if the fourth will really do anything bigger than this. I'm hoping for it.

This third book is just simply okay. It's still a rollicking adventure, but it's not big enough. The canvas is infinite; why do the authors continue to think only in terms of a BBC budget? This third book does slightly improve on this by featuring a giant satellite in space made of living metal and a giant sea serpent, but that's about it for grand scale. Even the monsters that do security for the mysterious benefactors have that man-in-the-rubber-suit feel that plagued Doctor Who. I can visualize the seams.

Unfortunately, that sentence sums up the experience of these books. So why do I continue to read them? Why don't I give up? I still enjoy reading about the Doctor and Ace. The Seventh Doctor is a fantastic and mercurial character; the Cartmel Masterplan rears its awesome head with this book in a beautiful way.

Plus, these books are incredibly easy to read.
Posted by matthew.