Here we go with the second novel in the New Adventures, and the second part of the four part Timewyrm series. Will this second novel, written by one of the more prolific Who writers of all time, manage to improve or will it ultimately disappoint? Let's take a look, shall we? 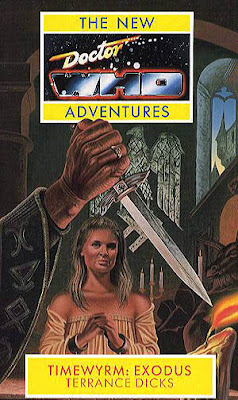 The Doctor and Ace have followed the Timewyrm to London, 1951, where ominous flags adorned with swastikas droop in the gloom. It seems that the Nazis won World War Two, but there seems to be no particularly clear reason why not. Obviously somebody or something has wreaked havoc on the timeline, and the Doctor and Ace must travel to Berlin, 1939, and figure out exactly how this came about. When they arrive, they are not ready for what they find.

So, yes, a slight improvement, but nothing drastic. The major problem with this story is the setup: it's positively tired. A what if situation in which the Nazis are the primary villains? That's boring. Straight up boring, and this is coming from the guy who normally loves to see Nazis get their asses handed to them. While the setup might be a tired and creaky one, how we get to the reveal is moderately convoluted.

The author plays with a little timey-wimey aspects - which totally makes sense. I'm always irritated by Doctor Who when the cast forgets that they have the power of time in their hands. If you have a time machine, you would be God. It takes an excellent writer to handicap the protagonist without making them seem like an incompetent idiot. There must be a believable reason why the Doctor cannot use his TARDIS as a deus ex machina. However, that being said, sometimes the Doctor does something rather clever. In order to ingratiate himself into the Third Reich, the Doctor travels from the alternate 1951 to 1923, where he meets Hitler. Thereupon, he travels to 1939, armed with the knowledge that Hitler will no doubt remember his portentous words. It's quite a clever use of the TARDIS and I was excited to read this. It marks one of the few times that the time machine is actually used for its purpose other than a way to travel in space.

The other clever part of this book actually saves the novel from being ridiculous. The reveal of what is happening in 1939 took me by surprise. It relies on some extremely old Doctor Who lore, a serial that I had heard of, but of course have never seen, and manages to be both crucial to the plot, and to the characterization of the Doctor. I can't spoil anything of course.

The Doctor and Ace are written well enough, but not nearly as well as the previous book. So there you have the trade-off: the plot is better and on a much larger scale, but the characters are fairly thin. The banter is not nearly as good either, something dearly missed.

Overall, I still enjoyed the book, especially the final third, which involves the Nazis and the occult, something that's always interested me. The book is okay, and only slightly better than the previous one. I understand that the third is the worst, followed by one of the best in the entire series, the fourth, written by Paul Cornell (writer of my favourite modern day serial). Here's hoping.
Posted by matthew.