That's quite a title, isn't it? Oh well. Here begins, for this blog, the nerdiest venture ever attempted: reading Doctor Who novels produced after the original series' cancellation. I was inspired mostly by blogger Dorian, an encyclopedic Who fan, and his series of mini-reviews of the New Adventures line of novels. They seemed rather epic and his opinion of the books seemed mostly positive. However, there was no way I could ever get my hands on them. They're unbelievably rare in Canada, and to purchase them off eBay was going to be impossible. But I got my hands on ebook versions of a few of them. I started with the very first book in the series, Timewyrm: Genesys. 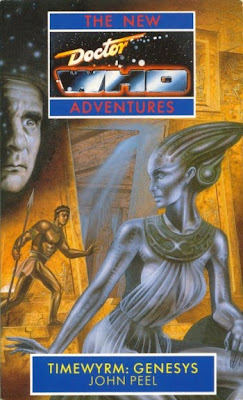 The Seventh Doctor and Ace receive a cryptic and largely unhelpful recorded message from the Fourth Doctor, warning them of the coming of the Timewyrm. Their investigation leads them to Mesopotamia, the time of Gilgamesh. It seems that the goddess Ishtar has materialized on Earth and is mentally enslaving everyone for her own mysterious purposes. It's left to the Doctor and Ace to figure out what she's up to, where she's from, and how to stop her.

Once I had finished this story, I was left mostly underwhelmed. It lacked all of the pizzazz and the darkness of the Cartmel Masterplan (google that if you really want to know, suffice it say it's nerdy and inconsequential). The prose was lifeless and the plot not nearly complex enough for 150 pages. But, regardless of how I felt afterwards, I read the book in two sittings, was mostly entertained and chuckled a few times at the Doctor and Ace's banter.

I think the major problem is that this book is the first in a quartet, and it takes a while to set up the major problem, that is to say, the creation of the Timewyrm itself. Superficially, the novel uses the same Doctor Who structure: brief setup of people for the Doctor to interact with, a mysterious anachronistic presence, the Doctor figuring things out much later than the audience has, the showdown, in which it's revealed the presence is either a) misunderstood or b) mono-chromatically evil or good. There's nothing inherently wrong with this structure. In fact, part of Doctor Who's success is due to this plot. However, when you have no budget to worry about, you shouldn't be limited at all.

The conclusion of the novel features the Doctor speaking some technobabble and playing around on the TARDIS console, just like the ending of many serials. They could have done something even bigger, more epic, more awesome, but the writer chose to keep with the show's budget. This is slightly disappointing.

However, I still liked the book, partially due to the characterization of the Doctor and Ace. I haven't seen all of the Seventh Doctor's canonical adventures, but from what I have seen, he's an extremely enjoyable incarnation. The writer of this adventure appears to have accurately captured his weird personality. Combine this with the excitement of simply reading a Doctor Who adventure, and I'm pleased.

There's really not much more to say about this book. This isn't a book to read for the symbolism or careful Nabokovian style. It's an adventure about the Doctor and I liked it.
Posted by matthew.