"If this is a book, it's a severely strange one."

So says Ace near the end of this book, the fourth in the Timewyrm quartet, the longest of the books so far, and easily the most complicated. Let's dive into this, shall we? 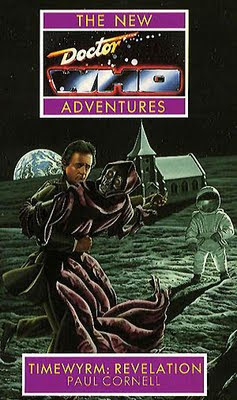 The Doctor and Ace have fought the Timewyrm in Mesopotamia, Germany and the end of the Universe. But the trail has suddenly gone cold. They arrive in a small English village to say hello to some of the Doctor's friends, but a small four foot tall astronaut appears and tries to kidnap Ace. It seems they are not in the village at all, but on the Moon. The Timewyrm's greatest trap has been sprung, and it leads both Ace and the Doctor into the darkest parts of their souls. The greatest of all games has begun and it will inevitably kill both the Time Lord and the girl from Perivale.

Now this, this is a goddamn Doctor Who story that transcends the television show. Paul Cornell, a huge Who-fan who wrote a continuity guide published his first novel with this fourth book and it's a doozy. After the first three books, which were still very classic in its approach, Cornell wrote a serious mindfuck of a novel that echoes continuity, the Cartmel Masterplan, and the darkest aspects of Doctor Who. This is probably the beginning of the modern era of Doctor Who with this book.

First of all, the prose quality is a huge improvement. Cornell spends his time describing things and making them seem real as opposed to merely stating them so the reader can follow along. However, there are still some examples of purple prose, the amateur in Cornell shining through. There is enough evidence of pure intrinsic talent to confidently say that with enough practice, he would eventually be professional, and we all know he is.

There's echoes of Steven Moffat in this book, I have to say. The beginning of the book just reeks of Moffat's trademarks: the incongruous and vastly mysterious but recognizable threat, the surrealism, the timey-wimey stuff. But this was written in 199- so I can guess it's Moffat inspired by Cornell and not the other way around.

What isn't very Moffat-esque is how cerebral this book is. Most of the action takes place in a world that seems like Hell. It's a world controlled entirely by the Timewyrm, but populated with the stuff of nightmares pulled directly from both the Doctor and Ace's minds. They must face their inner demons in a twisting and artful way in order to defeat the Timewyrm. But it's all part of some vast game that includes a sentient church, a mathematician, a quiet and bland baby that the Doctor suddenly drops off without explanation, and a vicar with serious existential problems now that the church was violently supplanted to the surface of the Moon.

The best parts of the book are the Doctor and the Timewyrm playing this vast game and of course, how clever and brilliant the Doctor is when everything comes together. This doesn't spoil anything, of course. Everybody knows that the Seventh Doctor is the master manipulator. The game is more subtle and beautiful than the audience thinks, and this is why the book succeeds. Not only does Cornell use time travel perfectly (an advertisement in the 2018 issue of NME implores Ace to "DUCK!") and uses the Doctor's darker aspects to perfection.

However, all is not perfect. The phantasmagoria and surrealism of the book tends to drag on a little. Ace gets jostled from one hallucinatory nightmare to the next without any seeming logic (there is logic, however) and it kind of gets tiring, especially since the reader is left in the dark about what the fuck is happening the entire time. All of this to say that the book is a little self-indulgent in fantasies and pulling the wool over our eyes.

Even though I found the middle part of the book to be difficult if only cause I had no idea what was going on, I always knew that the stakes were high. Enormously high. There were a few moments where I doubted even the Seventh Doctor could win this game. I haven't read a book or watched something with stakes this high in a long time. This is a great compliment. The danger seemed real and for once, the Timewyrm seemed especially dangerous. The trap it has sprung recalls events and people from across space and time and even the alternate 1951 England from the second book. Everything comes together and the Timewyrm is scary because of it.

I really liked this book. It was exciting, suspenseful, funny, well-written save for the odd bit of purple prose, and it had a huge scale, an epic game played out over time and space and budget was of no concern. This book was amazing. This is exactly why I wanted to read these Doctor Who books. I'm going to keep going until I burn out on them.
Posted by matthew.