Let's take a step back into the Virgin New Adventures, shall we? We move on to the tenth book in the series, written by Ben Aaronovitch, who wrote the Remembrance of the Daleks episode I just recently reviewed. 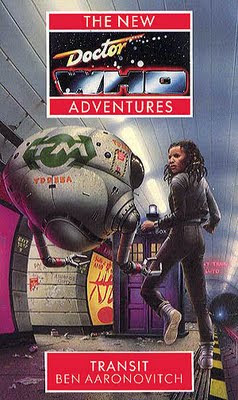 The Doctor and Benny are separated when a wave blast of energy comes traveling up interstellar transit line, hitting them in Kings Cross Station. This is the same energy wave that killed the President as he was giving his speech announcing the opening of the new interstellar transit system. It also killed hundreds of people. Now there's something else coming out of the gateway, something big, and the Doctor teams up with Kadiatu Lethbridge-Stewart to figure out a) what it is, b) how to stop it, and c) where the hell is the TARDIS?

A cyberpunk Doctor Who novel... really? So what does this mean for the book? It means that the writer is going to bombard you with annoying technical jargon and use the words "subroutine" and "subset" almost to the point of self-parody. There's a three page scene in which a fighter jet carrying the Doctor and Kadiatu, piloted by her blind aunt, is being chased by three rockets. Aaronovitch manages to make it as cyberpunk-y as he possibly can. Here are two paragraphs from this scene.

The radar-proximity fuse mounted in the missile's nose behind the avionics saw the jet in its kill radius and fired. A shaped charge of flaked Brazilian TNT exploded. Thirty-three marble-sized bomblets were blasted forward in an expanding cone.

The aft quarter thermal imager on the jet flared out with the explosion. Francine felt the airframe shudder as three of the bomblets ripped through its carbon-fibre skin. The starboard turbine rev rate shot up as fragments of its shattered blades spewed out the exhaust outlet. Francine shut it down with a mental impulse while another part of her mind assessed damage to the fuel tanks and tailplane servos.

What the fuck does this even mean? I know, I admit that I'm providing this with little context, but you can see what I mean in regards to the density of the jargon and the density of the prose itself. The amazing thing is, Snowcrash by Neal Stephenson (which I loved when I was in my teens) came out the very same year, only a few months before Transit. This doesn't mean one was affected by the other; I suppose both were capitalizing on the emerging and soon-to-be-overexposed cyberpunk subgenre. This Doctor Who story also tries to be more adult, keeping in line with its more mature subgenre. As far as I can tell, this is the first instance of a Who story using the word "fuck" multiple times. It's also the first to have characters fuck multiple times. All in an effort to be edgy and be like cyberpunk! And in keeping with the genre's trappings, the climax of the novel is set in a virtual reality! Of course it is!

Let's try and clear our minds of the fact that cyberpunk is - at 2011 - a tired cliche. Let's try and judge this book on the basis of whether or not it's a good story.... Is it? Yes and no, I suppose. I really enjoyed reading this but not so much for the plot (which was confusing due to Aaronovitch's cyberpunk-style-aping). Instead, I really enjoyed the dialogue and the characters.

The dialogue might be the highlight of the entire work. There are so many funny one-liners and asides and replies. Each character gets a chance to say something snarky or snide, and each time, it's pretty damn funny. And the characters are pretty fun, too. Kadiatu is a fun and interesting addition to the cast. There's a hint somewhere in this book that Kadiatu was made as a reaction to the Doctor, that she's the antidote or something. It's all very vague and abstruse on purpose, but whatever.

Here's a problem for me as a Who fan: there's a lot of history with these books and most of the time, I'm quite out of date. Specifically, this is a very famous Who book because of the controversy and because of an ultrafan's comments regarding its importance. Lawrence Miles, the aforementioned fan, said somewhere sometime that Who canon post-88 revolves around Aaronovitch. I read this little tidbit in a very entertaining review, which also tells me about the future of the novels and how they were greatly inspired and shaped by this book. But, I'm not enough of a hardcore fan to really appreciate Transit's impact - I'm reading them twenty years after publication and I'm reading them in a vacuum: no context, no historical background, and no prior knowledge. I don't really go to messageboards, nor do I read the fanzines. The best I can do is read Transit without any bias from the fan community and judge the novel based on its merits as a novel.

It's an entertaining book and I really liked it. In fact, the more I think about it the more I like it, even though the cyberpunk angle is hopelessly dated. The book kept me happy for hours and at the end, I was still excited to keep reading Doctor Who books. Plus, if you squint hard enough, you can start to see the greater picture with these books. By that I mean, a larger story is starting to be told. Previously, the books were linked by a rather vague commonality like a Timewyrm or a silver cat. But now, there's a larger story of the Seventh Doctor being Time's Champion, and a recurring theme of the Doctor's tense relationship with his companions. You can see this forming ever so slightly with this book. Plus, recurring elements such as the Doctor's house in Kent come back in this book, finally creating a sort of continuity.

So yes, overall, I enjoyed this book. I didn't love it, if only because of the cyberpunk and the narrative pushing aside new companion Bernice in favor for yet another new companion, but I did like it a lot. All I want from these books is to entertain me and get me all excited about Who. This novel succeeds entirely. Anybody searching for something else from this book might be disappointed.
Posted by matthew.