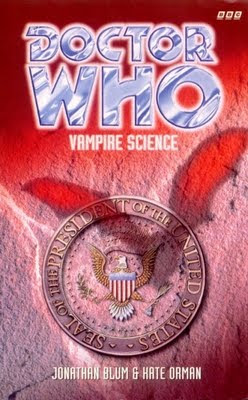 Sam Jones, the Eighth Doctor's young companion, tells a brief anecdote of the time the Doctor dropped her off at a rally for something and then toddled off into the TARDIS to "take care of some things". He spent a full year running errands and saving the world(s), forgetting that he had left Sam back on Earth. He used the TARDIS to go back to Sam five minutes after the rally was done so that she would never notice he had been gone for a year, but he told her anyways. This heartbreaking and beautiful little story is kind of a microcosm for this whole book. Vampire Science is a fairly sad and depressing book, one where the Doctor isn't perfect and life with him isn't all whizbang fun and that lives are affected by "the Oncoming Storm" sometimes fatally.

However, this is also the first vampire novel I've ever read that seriously deals with the issue of how vampires do a number two. There's also a truckload of ethical hand-wringing over the issue of vampires - are they just animals like lions who need to be tamed or controlled, or are they mass murderers?

There's not a lot of plot to this novel, and that's a bad thing. I don't read Doctor Who stories for ethics or for theorizing on genetics. I want to see the Doctor be the Doctor and have some cool adventures. So, when I read Vampire Science, and it's 200 pages of the plot moving listlessly from one event to the next, I'm slightly disappointed. The plot doesn't come together in any cohesive manner until the last ten pages, when the Doctor finally becomes cool and kicks ass.

Noticeably with this novel is how true the emotions ring. I mentioned above that this is a rather depressing book and it is. There's ton of nihilistic sentiments voiced by the secondary cast, including the humans, and everybody gets all depressed and sad. But you really get invested in the emotional arcs of the characters, which is something very rare for Doctor Who books, it seems. Sam and the Doctor share a tempestuous relationship for most of this book - actually everybody has a tempestuous relationship with the Doctor!

A word about Sam Jones, though. It's hard to tell what kind of companion she is. She's barely in the first book, so this is her first "real" adventure with the Eighth Doctor. Here's what we know about her: she's very outgoing and quick to respond, she's a big believer in "issues" and she participates in a lot of rallies and political things. In other words, she's a perfectly normal rich kid from 1997. For a good portion of the book, I was getting an "Ace" vibe from Sam, but further on, I was also getting a "Sarah Jane Smith" vibe as well. It's hard to tell what she's like from this one adventure. Overall, I can't say I disliked or liked her.

The Eighth Doctor gets perfectly summed up in this book as well. Somebody says that in contrast to the Seventh's more aloof presence, the Eighth is much more cuddly and compassionate and touchy-feely, but still prone to action. He's not the whizbang "brilliant!" style like the Tenth, but nor is he the Venusian Akido expert like the irritating and pompous Third.

For some reason, I've always found it somewhat off-putting when a Doctor uses physical violence to subdue a foe. The Doctor I love the most is either the Tenth or the Seventh, both of whom would be loathe to touch somebody. In fact, the Tenth goes off on rants all the time about this kind of thing. So it's weird to read Vampire Science's climax, which echoes all "thrillers" and "airport reads" in its execution of the ending, which is to say, a physical confrontation. Thank heavens the writers manage to pull of a very Doctor-esque twist at the very end to kind of salvage the physicality of the ending.

Overall, I thought this book was good, but not great. The plot is incredibly weak and stretched out for far too long, but the character are exceedingly well written. The prose ain't bad either. Although, I do have to mention the egregious American voices the British authors think is working. All of the American characters just have the most obvious non-American voices, and some of them even use English expressions! Oh well. We can't all be perfect. This was better written than the last Eighth Doctor adventure and overall it was a better read. I look forward to the next adventure.

(Also, that cover is very misleading. I kept expecting there to be some sort of political intrigue or some sort of "holy shit, the President is a vampire!" in true Who fashion, but alas, the plot stays rather mundane)
Posted by matthew.